“If this project were across the street, it wouldn’t be allowed.” 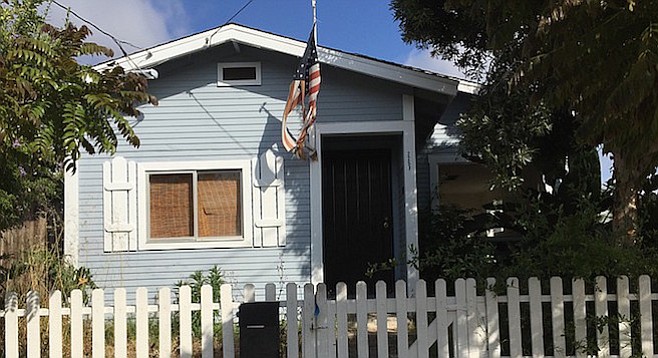 On May 26, a proposed project at 2257 Froude Street was appealed by the Peninsula Community Planning Board in front of the city’s planning commission. The residents on the block — where one side of the street is in the Ocean Beach planning area and the other in Point Loma — are up in arms about the city approving the project behind closed doors in February. 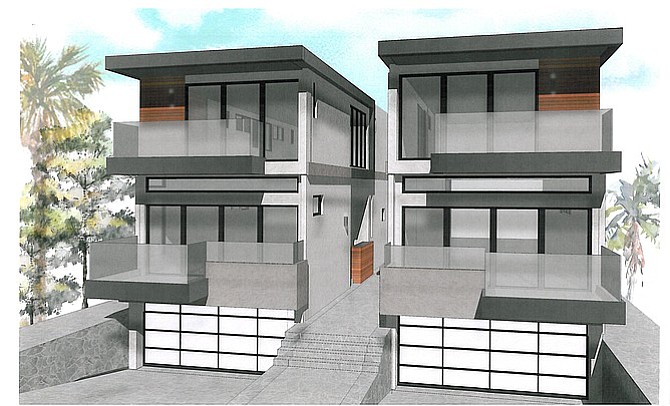 courtesy of Peninsula Community Planning Board

This quaint neighborhood with mid-century Craftsman and early-California Spanish-style architecture is facing a proposed project that would replace a single-story Craftsman-style house with two houses. The average size of a house on this block is 1300 square feet. The proposed project would replace a one-story 1306-square-foot home with two ultra-modern glass-and-steel two-story structures of 1814 square feet each.

Judy and Tom Parry live on the same block and side of the street as the proposed project. “We’ve procured signed petitions by the neighbors protesting the proposal,” said Judy Parry. “The proposed development is totally out of character with the neighborhood,” said Tom Parry.

“These proposed 30-foot dwellings will have decks on top and solar panels reaching further into the sky and will reduce the privacy of the surrounding neighbors,” said Judy Parry.

“Parking on the street is a critical issue, bordering on parking wars. The project calls for decreasing street parking,” said Tom Parry.

Even though the Point Loma Planning Board voted against this project, it was still approved by the city’s Department of Development Services.

Don Sevrens from the Peninsula planning board headed up the appeal this week. “The Point Loma planning board voted against the project,” said Sevrens. “Ocean Beach wasn’t even allowed to vote on it even though the project is on the same street.”

“It’s a horrid project. The developer wants to make two tall houses on two tiny lots. It would look like a duplex with six feet of area between the two of them. It also pushes the 30-foot limit….

“The whole project is just poor planning. With the 24 feet in curb cuts for the driveways, half the frontage will be curb cuts. That’s a lot of parking to take away from a street that doesn’t have much to begin with….

“Community plans take years and may cost $1 million to do. Ocean Beach spent a dozen years on their plan only to see a key provision limiting massive structures on tiny lots gutted by the city’s planning commission who decided to allow unlimited variances on a case-by-case basis.” 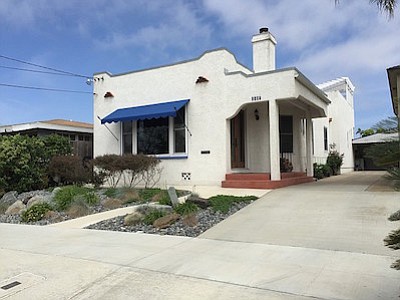 A 1930s house on the same block of Froude Street

“The language for zoning in this neighborhood says that whatever is built must comply with density and character of the other houses. The city bureaucracy apparently considers community character to be important to only half of this block on Froude….

“On one notice, they described the two lots as being 4618 square feet and then on the appeal notice, it was 4850 square feet.”

The difference in square footage is a big deal since Ocean Beach has a building footprint of 70 percent and Point Loma 75 percent. As Sevrens puts it, “If this project were across the street, it wouldn’t be allowed.”

Whatever planning area the project resides in, Sevrens said, “It’s not in line with the community character. And it’s just strange that one side of the street in the same neighborhood has no say as far as anything goes.”

I tried to contact both the city and the project architect, Scot Frontis. The former declined to comment and the latter never returned my call. I also tried contacting the property owners (NVision Capital/Coga Properties), but their contact number in city documentation is the same as that of Frontis’s.

On May 19, a report to the planning commission, signed by city’s project manager William Zounes, recommended that the May 26 appeal be denied and that the project be allowed to move forward.

According to Sevrens, the appeal was denied by a 5-to-1 vote.

“They did not agree with arguments that splitting a 50-foot parcel into two 25-foot lots was a bad trend and accepted a staff assurance that the proposal did not exceed the 75 percent floor-area ratio despite evidence offered based on city documents,” said Sevrens.

“It seemed like we were wasting our collective breath,” said Judy Parry on May 27. “The planning commission had already made their decision based on their first finding and the appeal was just patronizing us. Why do we even have community planning groups? The city didn’t even care what we said or what we wanted or didn’t want. It seems to be all about more property tax for the city.”

This is not a great plan to put two McMansions on a tiny lot surrounded by tiny homes.

Point Loma money and political clout vs OB no money and no political clout. What a surprise. Many quaint single family home neighborhoods are dotted with out of character clapboard slumlord style apartments.

Did you see the Point Loma Planning Board voted no?

Developers rule this City. Did you notice that Filner's people were fired immediately, before his resignation was final? That was because they were standing up for neighborhoods. First step is firing Faulkner, and replacing him with someone law abiding.

Leave William Faulkner out of this!

While I'm sympathetic to those who would like to keep old OB in its original style, my personal observations of those tiny, century-plus-old Craftsman cottages aren't all that positive. While some appear to have been lovingly cared for, many others are just in poor condition, and don't add up to high-quality housing. In fact, some appear to be barely habitable. When they are allowed to deteriorate that far, replacement may be the only option.

For example, while the house pictured above appears to be fairly freshly painted, it doesn't come across as an example of pride of ownership, or pride of occupancy. The front window seems to be blocked off with some reed fencing or reed matting on the inside--cheaper than draperies. The US flag displayed on the front is faded and tattered, a real disgrace. To make a case for preservation, the house in question should be a historic specimen.

On the other hand, having 25-foot wide (!) lots is a travesty in any neighborhood in San Diego, and multi-story monsters in among those tiny antique cottages is a travesty, too. In the big picture, I'm on the side of the opponents of this redevelopment.