Q&A with one of San Diego's top brewers, Tomme Arthur 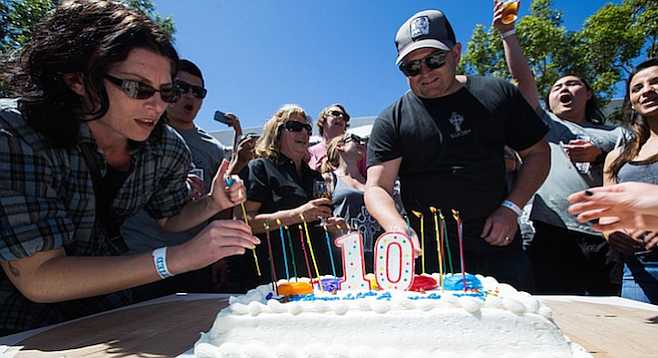 Ten years later, Arthur has added to the dozens of medals and brewer-of-the-year accolades he earned while at Pizza Port, including small brewer of the year at the 2007 Great American Beer Festival and champion small brewer at 2008 World Beer Cup. Today, Lost Abbey's influence on local and national craft brewers is plain to see, with wood-aged beers in particular seeing unprecedented demand.

The Reader asked Arthur to reflect on ten years in business.

What was the idea behind distinguishing Port Brewing and Lost Abbey as separate labels in 2006, and adding Hop Concept in 2015?

We felt that, from the get go, our beers were going to tell different stories…

[For The Lost Abbey] we'd been inspired by many Belgian producers including Dupont, Fantôme and even the Trappists, like Orval and Rochefort. It was our thought that these flavors of beers could be made here in the states with a nod to the old world production methods.

For the Port Brewing brands, we clearly embraced the new mantra of Imperialism and tackled bold hoppy flavors for our core beers, and sought out amazing recipes for others beers we felt truly complemented our base beer portfolio.

Most of the new hoppy releases we are producing have been moved into the Hop Concept family of beers. We love the classic flavors of [our Port Brewing IPAs] Wipeout, Mongo, and Hop 15. So the goal with our Hop Concept line of beers has been to explore new combinations of hops and aromatics without needing to retool long standing recipes.

How did you start out wood aging beers, and how much has the barrel program grown?

When the doors opened at the brewery, we started the process of oak-aging some specialty beers with 100 oak casks. We used to tell everyone it was one of the "larger" collections of oak for brewing on the West Coast. These days we joke most home brewers probably have that many barrels going in their garages! Today our brewery has over 1300 different oak barrels as well as two recently filled 100-barrel oak foeders [large volume wood fermentation vessels].

Personally, I filled my first oak barrel in 1998 when I was working at Pizza Port. It was a version of our Imperial Stout and the barrel came from Jack Daniels. We went on to acquire a total of eight barrels and aged beer in them out back behind the brewery until we opened the Lost Abbey. Our Cuvee de Tomme, along with Red Poppy, take their roots from those barrels we did in the late 1990s and early 2000s.

Do you anticipate much growth in the next ten years?

We have been producing about 15,000 barrels of beer for the past three years running… We believe that production will most definitely increase in the next ten years, but just like the first ten years, we're looking at managed growth as being a key driver.