Sithonia: the Baja of the Balkans 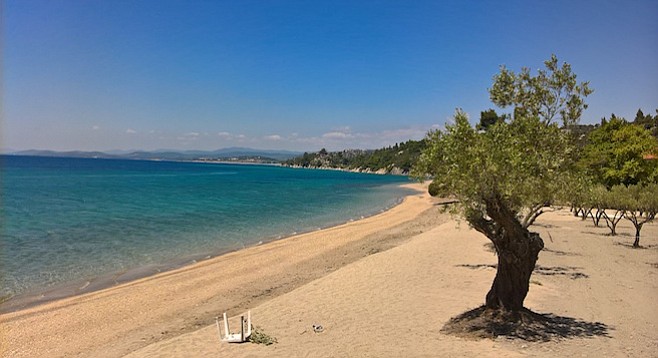 The first time I drove from San Diego down to Baja for a few days, I was 18 years old. One might think that the excitement and joy of crossing the border had something to do with drinking booze and being young and dumb. Maybe.

But over the years I returned to Mexico again and again because the sense of adventure never really faded. Perhaps it’s just me, but there’s something liberating about driving south across an international border. Whether to Ensenada, San Felipe, La Paz (or Greece), there’s the escapist impulse – the thrill of exploration, the search for a pristine beach, a non-touristy town, and the slight risk that comes with driving through foreign lands.

I don’t live in San Diego anymore, but I’ve found my new Baja in the three peninsulas of Halkidiki, Greece.

Some call it “The Three Fingers.”

My favorite one is the middle finger – Sithonia. 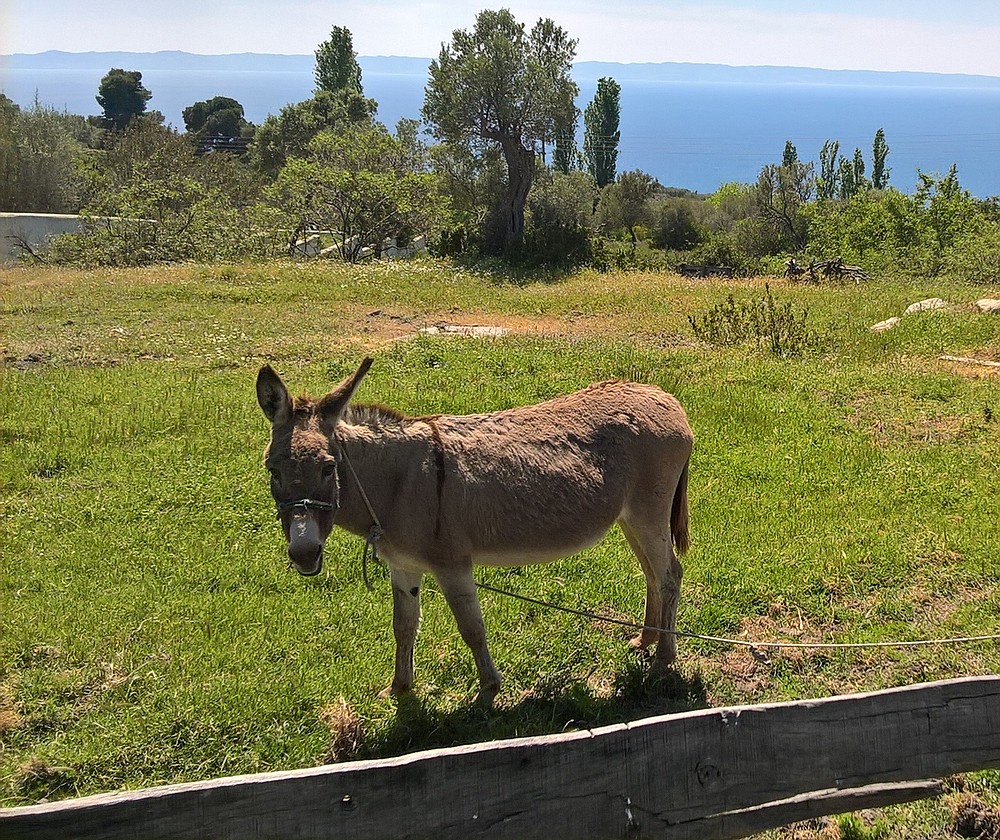 It might sound like a made-up setting for a dystopian novel, or Andre 3000’s new recording studio, but it’s a real place in eastern Greece. It is my "new Baja" because I currently live in Bulgaria and only have to drive four hours directly south to get there. As I’ve found out, Halkidiki is a favorite hidden vacation spot for most Balkan beach-lovers: Bulgarians, Serbians, Romanians, Macedonians.

And it is well worth the drive.

Like going into Mexico from the USA, the border crossing into Greece is quite quick. Beyond the sprawling industrial port town of Thessaloniki (pop. 1.4 mil.), there’s only the small coastal towns, pine forests, and olive groves of Halkidiki. Driving south here is similar to the feeling one gets exiting Ensenada or Mexicali going south, with miles of uninhabited terrain ahead. And it’s not just the warmer weather or Catholic/Orthodox crosses on the side of the two-lane road (marking where drivers have died) that makes Sithonia and Baja similar. 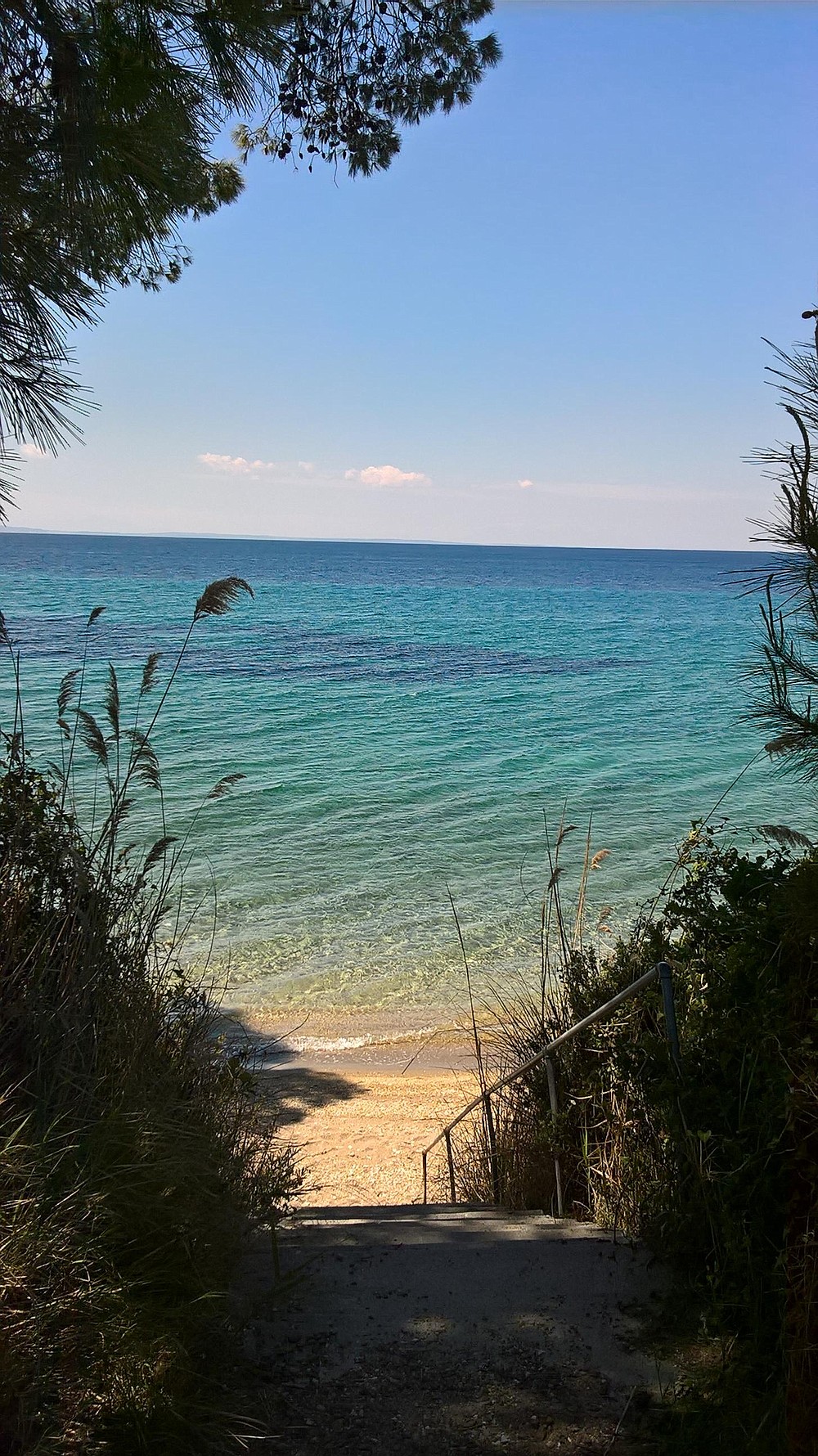 One of many "secret" beach coves in Sithonia.

Perhaps the best thing – and a well-kept secret – is Halkidiki’s numerous, brilliant beaches. Sithonia is one of the most undeveloped and non-touristy coastlines in Greece. Like southeastern Baja’s shoreline, the area boasts crystal-clear, azure water coves that can be accessed only by dirt roads. Between May and October, both the water and air temperatures are perfect. There are popular beaches with bar service, lounge chairs and umbrellas – the ones that grace local postcards. These spots are crowded in the summer, but Sithonia (in particular) is blessed with so many beautiful beaches, it’s just a matter of making the effort to find your own private paradise.

For instance, Karidi Beach is much photographed and marked on maps, but there are equally great beaches a few kilometers away. There are no signs. You just have to drive down a dirt path and see.

In Sithonia, it’s possible to rent a room in a guesthouse on or near the beach for 20 euros per night! There are only a few luxury hotels in the area, but nothing big or ostentatious. In fact, I don’t think there are any buildings over four stories on the entire peninsula.

Campsites on sandy beaches are available as well, but if you don’t need electricity or running water, there’s the option to “free camp.” Now, free camping (sleeping in a tent wherever you want) is technically illegal, but that doesn’t mean it doesn’t happen on a regular basis. With so many coastal nooks and crannies unregulated, it’s not difficult to remain at your isolated eden and pitch a tent for the night.

Like Baja, the local Greek food is awesome. No fish tacos, but there’s great seafood in every coastal town. My favorites are traditional Greek dishes like moussaka, gyros, souvlaki, spinakopita, tzatziki, and Greek salad (yes, it’s still called a “Greek salad” in Greece). Dining patios can get lively, like something out of My Big Fat Greek Wedding, and if you’re not careful you will feel big and fat after a week of eating this delicious stuff. Desserts, like baklava, are often complementary and always rich. Ouzo, too. The best thing is that you can enjoy all of this cuisine on a blue and white balcony overlooking the Aegean Sea with the theme from Zorba playing in the background. 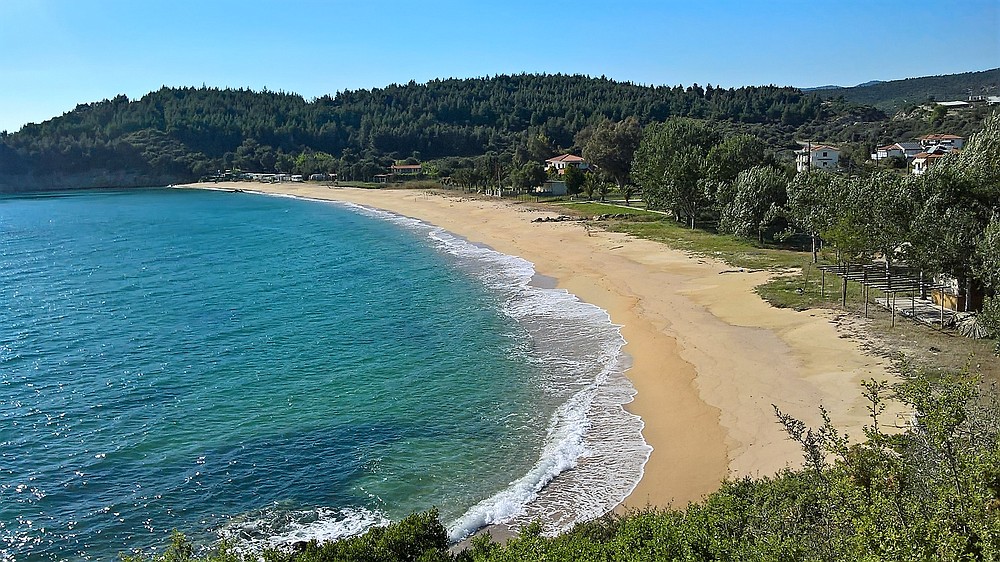 Also comparable with Baja California is Sithonia’s laid-back, relaxed pace. Just being on the beach, with the sound of the water lapping up against the shore, seems to slow down time... really slow.

Though I appreciate the siesta time, travelers should plan accordingly. Don’t skip lunch because you might not be able to eat again until dinner. Not only restaurants, but it looks like entire towns shut down between 2 and 7 p.m. My fiancé and I tried to rent bikes at 1:45 pm and the owner of the rental place – honoring siesta more than his potential customers – told us over the phone that we were too far away (20 minutes) to make it there before 2pm. Greek time. You can rent bikes tomorrow, he said. But this was the only inconvenient aspect of the laid-back Greek culture we experienced. Everything else was a welcomed break from the frantic pace of work and city life.

No federales, guacamole or border lines

How does this part of Greece differ from Baja? Well, aside from the obvious lack of guacamole, chips and salsa, Sithonia feels safer than Baja.

“Feels” is the keyword, because perception is everything (and often wrong). For instance, the per-capita violent crime rate is actually higher in Washington, D.C. and New York City than in Mexico City. Baja California Sur is the least violent state in Mexico. That aside, sometimes Baja can feel dangerous when you see a bunch of M-16–armed federales at a checkpoint wearing ski masks to hide their identities so they won’t be assassinated by the cartels.

This doesn’t happen in Greece. You don’t see many police officers, and when you do they’re sitting in 20-year-old blue and white hatchbacks drinking frappes. I also emphasize that it feels safer because Greece is no worry-free Shangri-La.

Just ask my friend Thomas. He parked his Volkswagen on the side of the road to take his family down to one of those gorgeous, turquoise-water coves. When they returned, the windows had been smashed and everything valuable, passports included, was stolen from the car. They were stuck in Greece for four days. Having said that, it still seems safer. I have free-camped in both Baja and Sithonia. Though I was not bothered on either occasion, while in Greece I didn't have nightmares about being ripped from my tent, called a cabron, and beaten before being robbed. In Sithonia, I slept soundly.

Where the two regions diverge again is in the language department. I can speak some Spanish and – aside from the embarrassing mistakes or miscommunication – I enjoy practicing while in Mexico. Because Southern California is my home, it seems like everyone knows a little Spanish, right? Not the case with Greek. First of all, in case you haven’t checked, the alphabet is completely different. Aside from picking up kalimera, kalispera, and efaristo (good morning, good afternoon, and thank you), there’s a very long road ahead if you want to really learn Greek. Luckily, most Greeks (under the age of 60) are happy to speak English. 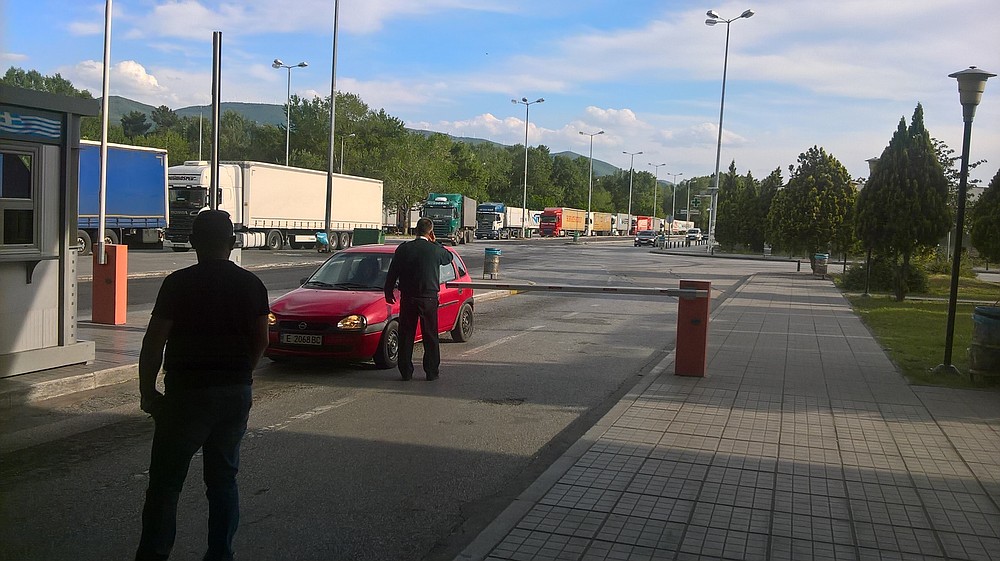 The Bulgaria–Greece border crossing: we're not in T.J. anymore.

Another welcomed contrast is the border crossing on the trip back north. There are no two to three hour lines of traffic, with idle engines, endless amounts of vendors selling crap, and enough carbon monoxide to coat your lungs for days.

Unless you are a European trucker (subject to strange boycotts and border blockades), in fact, there is no border wait at all. The average time to cross the Greek-Bulgarian border is about 2-5 minutes. It usually takes me ten minutes because they have to take my American passport in the office to stamp it. Sometimes the border patrol guys apologize for making me wait so long.

I just think of Tijuana and laugh inside.