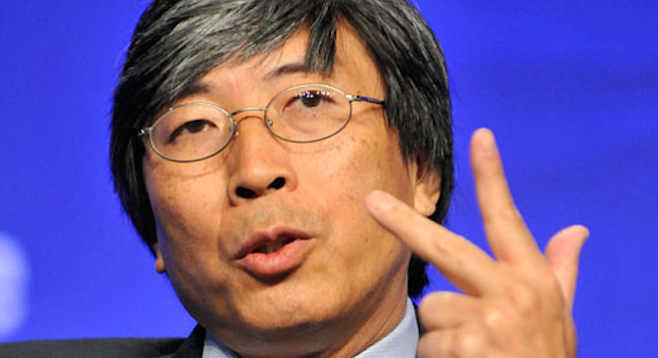 More twisting in the wind seems ahead for the besieged staff of the Union-Tribune as yet another Los Angeles billionaire joins the cast of characters on the big-money merry-go-round otherwise known as Chicago's Tribune Publishing.

As reported here last September, Patrick Soon-Shiong — called the wealthiest person in Los Angeles by the L.A. Business Journal, and part owner of the Lakers — has long been rumored to have his eye on the Tribune-owned L.A. Times, and sister Union-Tribune, which survives only through an umbilical cord to the Times printing plant in Los Angeles.

Among his other superlatives, Soon-Shiong, with an estimated net worth of $11.8 billion, has also been labeled "the world's richest doctor," according to Forbes.

Now he's getting into the newspaper business with Michael Ferro, the controversial master of Tribune, a move carrying high stakes for harried reporters who could lose their jobs to banks of artificial intelligence machines dreamed up by the South African–born surgeon.

In a deal intended by Ferro to ward off a hostile takeover bid by national newspaper giant Gannett, Soon-Shiong is buying 12.9 percent of Tribune Publishing for $15 a share, making the number of his 4.7 million–share stake in Tribune virtually tied with those of Oaktree Management of Los Angeles, which has roundly criticized Ferro's high-tech turnaround plan and urged a sale to Gannett.

On Monday (May 23), Tribune rejected Gannett's sweetened offer for the company and the putative takeover bid may be running out of steam, with Gannett saying it would wait for the results of Tribune's annual meeting June 2 — at which Gannett has asked shareholders to withhold their votes for boardmembers — before deciding what to do next.

“Tribune again changed the composition of its board without stockholder participation,” Gannett noted of Soon-Shiong's new title of vice-chairman under Ferro, the Wall Street Journal reported.

When not dabbling in sports and the future of the newspaper industry, Soon-Shiong operates an outfit called NantWorks.

"The company aims to connect all of a patient's health data and leverage it with genetic information to revolutionize the healthcare experience," says Forbes.

The super-rich physician also runs NantKwest, an L.A.-based start-up that opened a plant on Torrey Pines Mesa earlier this year.

"We're very excited about being in San Diego, because the talents, the skill sets around are fabulous," he told the U-T in March. "The manufacturing facility we acquired was ideal."

But what goes up in Soon-Shiong's biotech empire also goes down, as noted by the Motley Fool in February.

"January's sell-off shows just how risky these early stage biotech stocks can be."

As of early this week, NantKwest was trading around $6.50 a share, after a long fall from its peak of $34.99 soon after the company went public last July.

Another Soon-Shiong company, NantHealth, was sued for fraud by ex-employees who claimed the reliability of its systems were overrated and cash payments were used to attract federal funding, according to a January 2015 report in the New York Times.

Added the paper, "An investigation more than a decade ago by The New York Times found that a little-known drug company then headed by Dr. Soon-Shiong had a financial relationship with Premier, a major purchaser of supplies for hospitals nationwide that was supposed to be free of such conflicts."

Curing the cancer that is eating away at the Union-Tribune and the other newspapers in Tribune's troubled fold may pose an even tougher challenge for Soon-Shiong, but according to Forbes, he is ready and willing, even if that may mean replacing editors and reporters with robots.

"Tribune will also gain access to studio space made available by NantWorks subsidiary, NantStudio, LLC. In the license, Tribune will earn the first $80 million in revenues from NantWorks’s AI patents and a 6% royalty on revenues thereafter."

According to the account, "To effectuate this AI licensing plan, Tribune will issue 333,333 shares to NantStudio, worth roughly $5 million at current prices."

Said Soon-Shiong in a statement, "All industries go through cycles and Tribune, recognizing the vital role of technology in the future of publishing, is transitioning from a legacy newspaper company to a technology and content company…. I believe it is critical to our democracy and to our way of life that we have a strong, vibrant media and that it continues to function as the fourth estate.”