Proposition 47 a culprit in increase of burglaries? 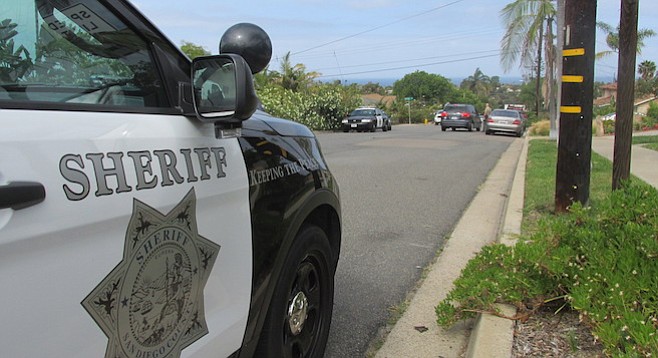 On the morning of May 20, a home on Nolbey Street in Cardiff by the Sea was the second home burglarized on the same street in the past two weeks. Combined with an increase of reports of car break-ins, burglaries are on the rise in Encinitas.

The incident happened between 8:00 and 9:30 a.m. When the home’s occupant returned, he found the front door wide open and could see a rear window screen torn off.

Five sheriff’s units responded quickly. The house was searched with guns drawn. Deputies found a floor safe had been ripped out and cabinets opened. “They obviously brought tools,” said one of the deputies. “We think we’ll get some good DNA on the open cabinet doors, ” she added.

“They knew what they were looking for,” said another Nolbey Street resident who returned home a few weeks ago to find it cleaned out. “They scoped us out,” said the homeowner. “One of us is home every day except one day each week, when we both have to work. They broke in that day. They knew we’d be gone,” he said.

The first question Capt. John Maryon of the Encinitas Sheriff’s Department asks is, “Who has been in your house?” he said. Contractors, or more likely the people they hire, might be the culprits.

Also, neighborhoods have been inundated with unsolicited estimators coming by for roofing, solar, or painting. “Why would these guys knock on your door at 2:00 in the afternoon on a weekday?” questioned another neighbor.

Nolbey Street neighbors say they have noticed unknown people sitting in cars or walking around with clipboards. “When you look right at them, they tend to disappear,” another neighbor said.

A resident from around the corner on Freda Lane stopped by to offer her condolences to the emotional homeowners. She said they were robbed in October, but the sheriff’s department caught the culprits in Mira Mesa with a garage full of stuff.

As discussed this week on KFI AM640’s John & Ken talk show, statewide, law-enforcement officials say the increase in burglaries is a result of Proposition 47, which removed thefts under $1000 as felonies. Recent reports say major retail chains are feeling the increased shoplifting pinch as crooks know exactly how much merchandise to swipe, keeping it under $1000. If caught, they are usually issued a citation and charged with a misdemeanor.

“We get guys walking out of Home Depot with a drill, expecting just a citation. We still arrest them and put them in jail,” said Maryon. “But many agencies do not,” he added.

“The increase [in burglaries] could be other factors,” said Maryon. “Most everyone we catch is on heroin or meth. It could also be a gang we don’t know about that just got out of jail,” he said.

As seen on the Regional Taskforce for the Homeless Point-In-Time (PIT) Count for January 2016, Homelessness went down -0.6% in the County of San Diego overall, and -8.0% within the City of San Diego.

With Mayor Faulconer's constant Homeless sweeps and harassment, it looks like Homeless citizens that use to live within the City of San Diego limits, have moved to the North County Coastal Areas which includes Del Mar, Solana Beach, Encinitas, Carlsbad, and Oceanside where Homelessness increased by +38.2% this year. Huge problem of moving the Homeless around the County through Police intimidation instead of solutions.

plenty of them coming to chula vista.

Prop 47 lets out "non violent" criminals. These dirt bags come out with no job prospects, no skills, no support systems, nothing. They went to prison because they were caught stealing. They get out and go back to doing the only thing they know how to do which is stealing. It ain't rocket science it is exactly the outcome that was expected. Prison offers 3 hots and a cot, free medical, dental, vision and prescriptions. They can not get any of that on the "outside" so why is everyone so surprised at the increase in crime?

We've always had a number of those door-to-door peddlersoif this, that, and another thing. But recently the numbers have sharply increased. I must mention that going door-to-door in my area involves DRIVING from house to house. The usual thing they claim to be selling is solar. But there are also those who want to trim trees and bushes, paint the place, seal coat the driveway, or . . . something. They usually look as is they are legit, but coming around on weekdays during the morning or afternoon makes me wonder. The "sales guys" may not be the breaking and entering crew, but can be providing leads to those who are.

And then there are those who were part of a crew that worked in or around your home. You never know just who they are, and they can be a great source of info for those who want easy-to-enter homes.

Very suspicious of these shitbirds coming door to door. I always answer the door so they know someone is around.

People. These are the laws you vote on if you like them or not. Our supposed overpaid public servants make up these lame propositions and sign them in without any opposition because the majority of you don't care..... until it happens to you. By the way. You also can't protect yourself because criminals have more rights than you do in this crazy state. Castle laws should be instituted, oh but wait, were not allowed to do that either. The names of these legislators and unicorn chasers should be kept in the history books so students and scholars can learn how this failed society ended. Start voting sensibly folks.

As long as SoCal keeps spending billion$ to make our towns a mecca for the nations homeless, we will have high crime rates. Every time Toni Atkins and Todd Gloria raise taxes to make SD a homeless destination, we'll be dealing with high crime.