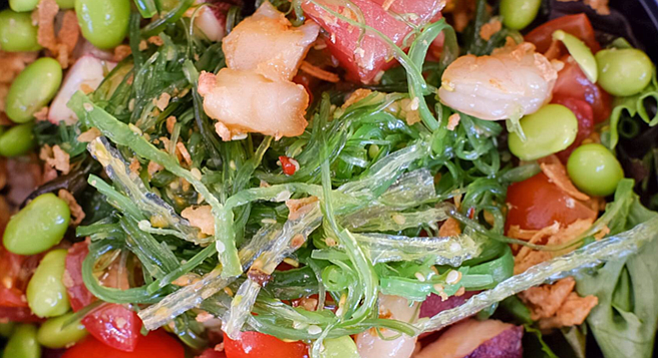 Poke, that raw fish salad associated with Hawaiian cuisine, has poked its way into the San Diego food scene recently. Some Whole Foods have bars dedicated to it, and there’s even an “I Love Poke Festival” taking place May 24 at the Bali Hai.

Restaurants are going whole hog for poke. Case in point, the San Diego Poke Company, which just opened a location in Grantville after a successful run in local farmers’ markets. The thing that I like about SDPC is that the money is spent on getting good-quality fish, not on the decor. Design-wise, it looks like a Japanese Subway but with excellent shrimp, scallops, salmon, and even seafood whose name does not begin with an S, such as octopus.

As with Subway, you get in line and pick a bowl or design your own. For instance, the Off the Hook is made with ahi tuna, serrano peppers, chili flakes, white onions, green onions, and crushed Hot Cheetos in a sriracha mayo. A large bowl ($11.95) has five scoops of fish. A smaller bowl ($9.95) has three. You start off with a choice of base: white rice, brown rice, greens, or chips. I chose half brown rice and half greens. That was a good call. The brown rice helped ensure that I felt full but without the food coma of all too much. I got octopus and shrimp along with the tuna. If you’re a vegan, you can substitute tofu cubes for the fish.

Like Subway, I could also top it off with a variety of goodies. Unlike Subway, these were actually good. I added things such as seaweed salad, tomatoes, fried onions, and edamame. The bowls come with a choice of sauce. I tried the Koko Loco, a coconut and sweet chili sauce that was interesting, especially when mixed with Seoul Hott, a Korean-inspired spicy bean paste.

My daughter added those things as well as avocado, cucumber, and pineapple to her bowl. She was very excited. For the record, she’s 13, so anything she’s excited about in my presence I take as a gift from God.

We also got four mini salmon tacos ($9.95). They were soaked in ponzu sauce, a sort-of citrus soy sauce, and topped with seaweed salad. Good appetizer, but not if you’re hungry, go for the large bowl.

SDPC has a variety of Hawaiian drinks, such as the Luau Punch, or a Passionfruit, Orange, and Guava blend, plus some Japanese drinks. These are sweet but add to the Hawaiian flavor in more ways than one.

For dessert, I recommend the passionfruit mochi, which is a rice-cake cookie with passionfruit sorbet inside. The Strawberry macaron ice cream sandwich was also refreshing.

San Diego Poke Company just opened, but the line was substantial. This could make for short-term challenges until the employees get into a routine but bodes well for long-term success. 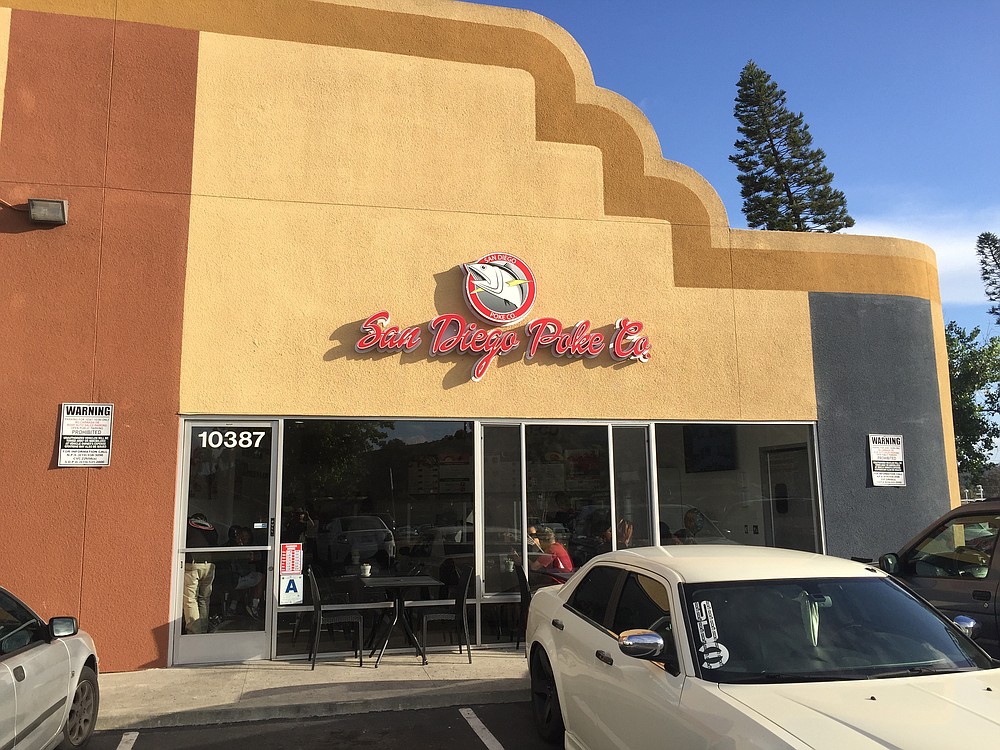 San Diego Poke Company opened in early May in the Grantville neighborhood. 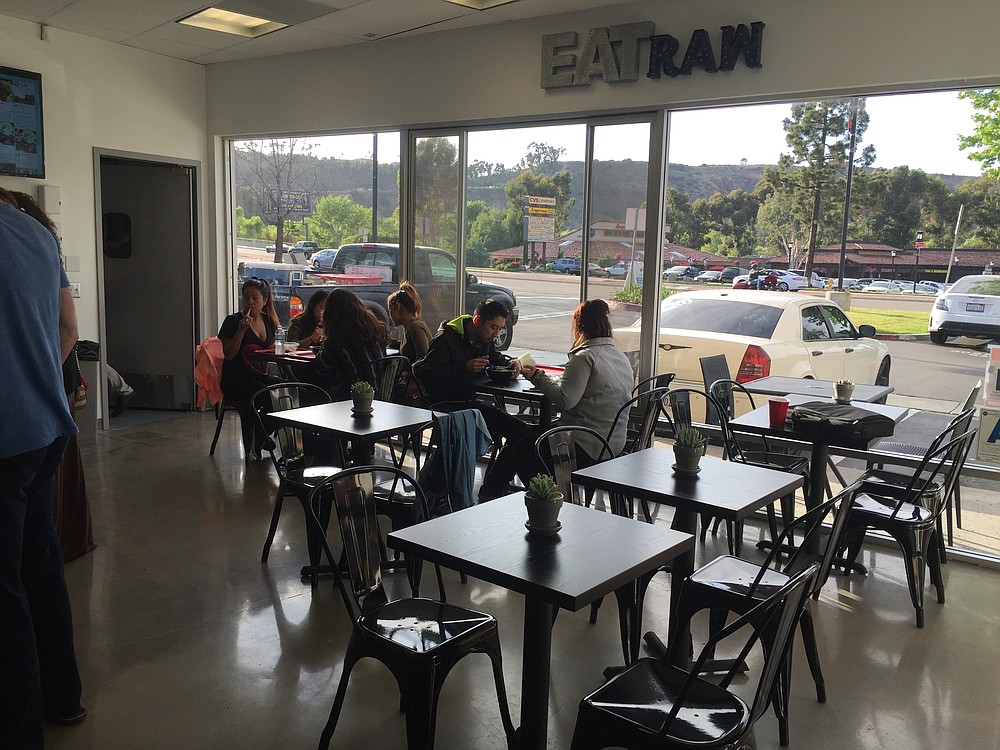 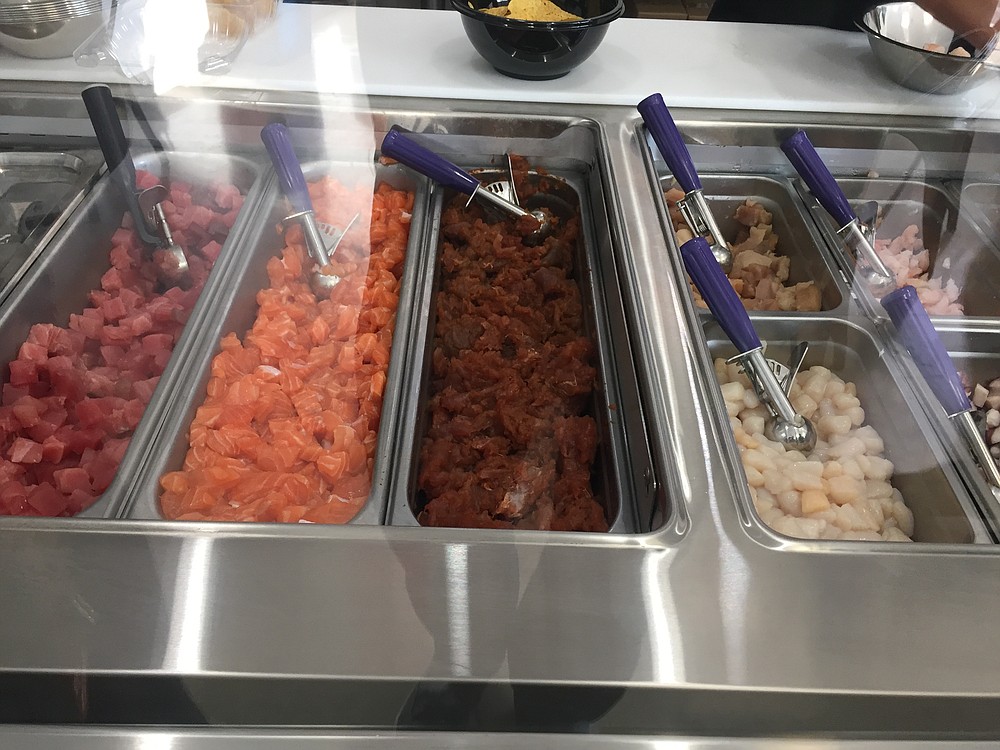 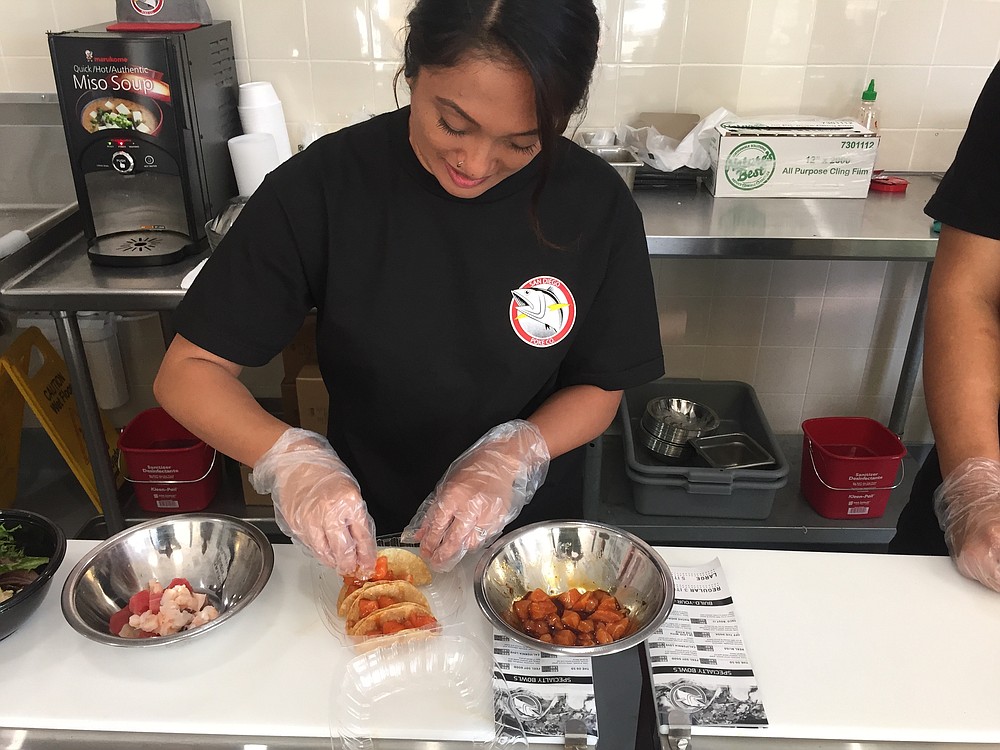 The salmon tacos are flavored with a sweet and spicy sauce and topped with seaweed salad. 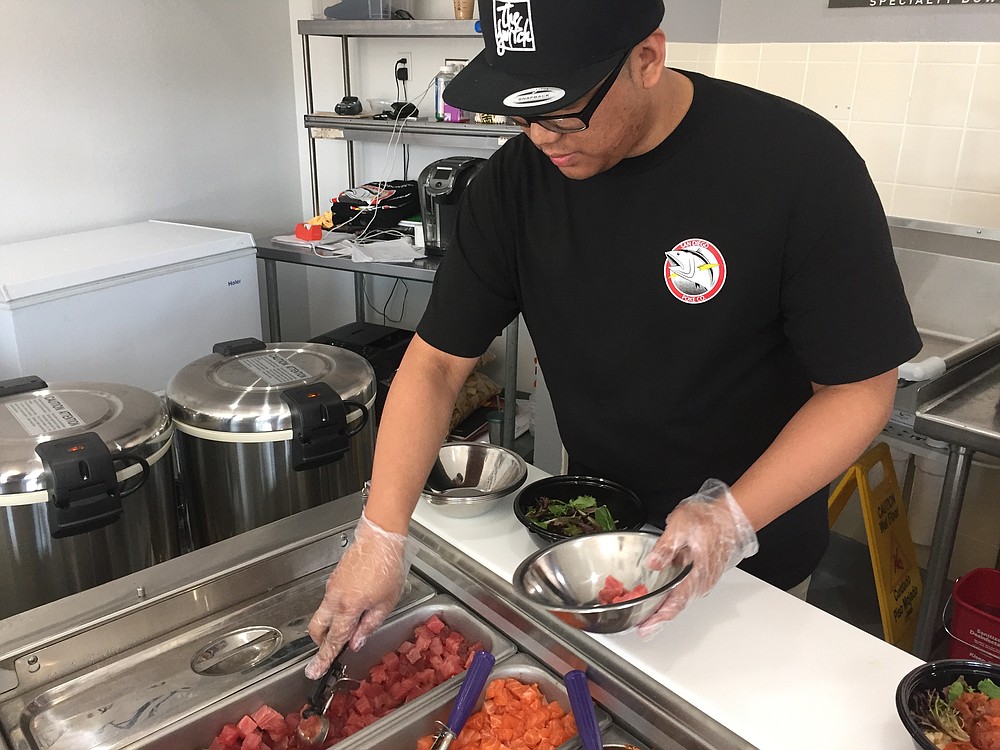 Poke is made by mixing raw fish with a soy-based sauce. San Diego Poke Company has seven choices of sauce. 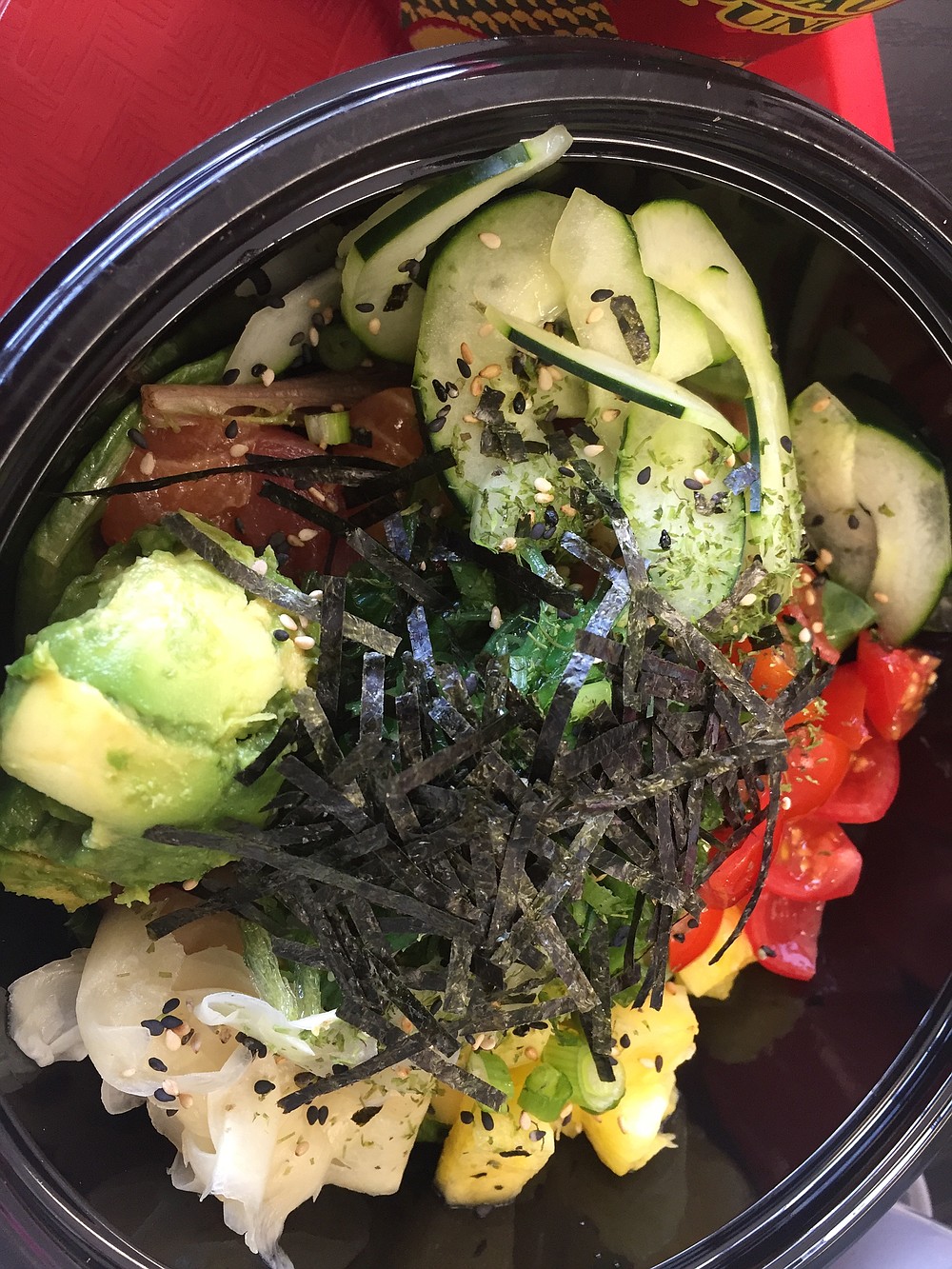 A large bowl ($11.95) features a base such as brown rice or salad greens, five scoops of fish, a sauce choice, and a whole bunch of toppings. 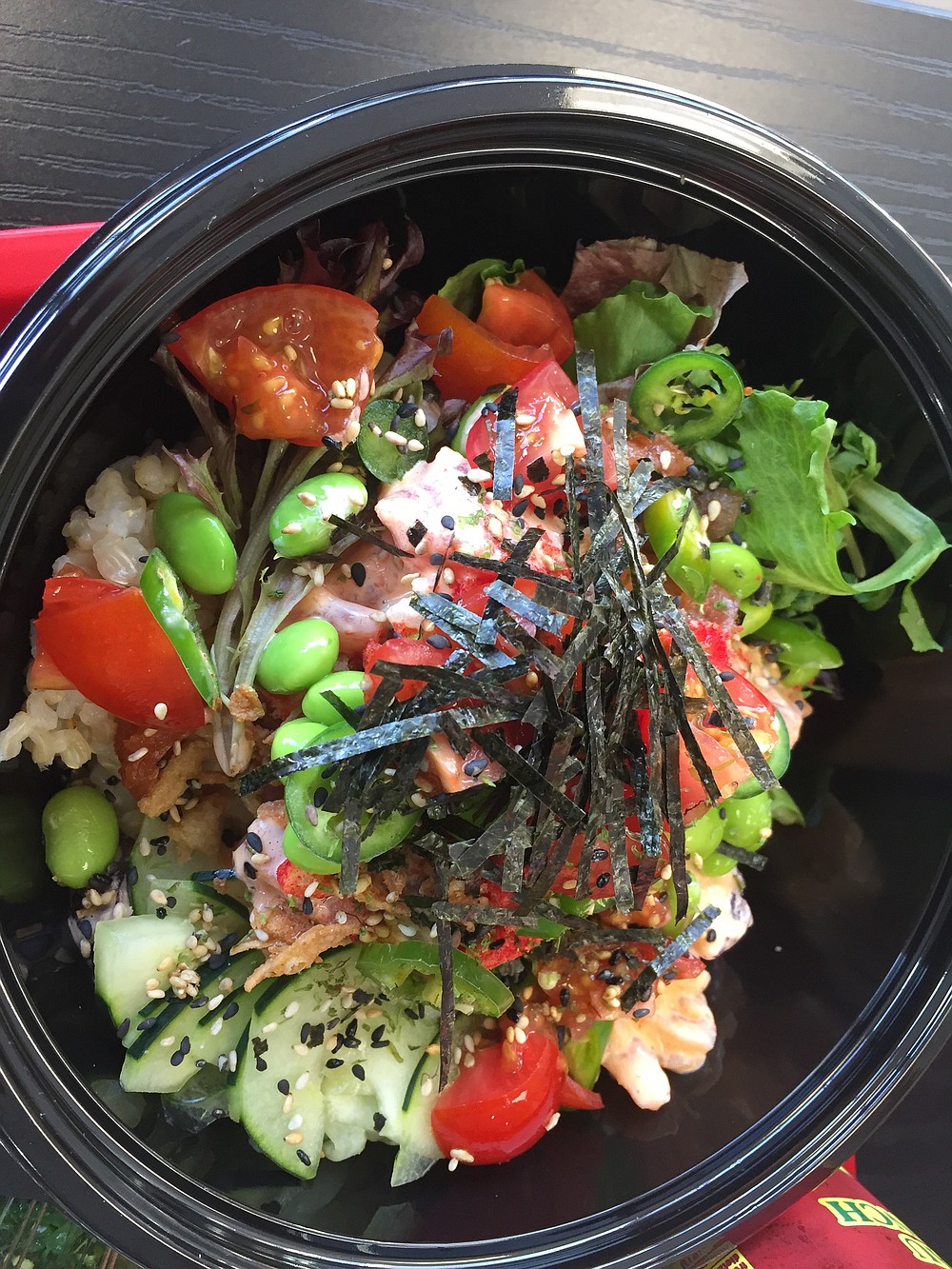 San Diego Poke Company has specialty bowls, or you can just build your own.

Umekes LLC was named winner of the Official Best of Hawaii 2016 “Best Poke Bowls” beating out numerous other competitors to take home top honors. Media World USA of 6671 W. Sunset Blvd Suite 1535 of Hollywood California, presented the award to Umekes LLC . Details about the award can be found on the Media World USA company website at www.OfficialBestof.com and on Umekes Facebook Fan Page at https://www.facebook.com/UmekesFishmarketBarAndGri… and Umekes Instagram page at https://www.instagram.com/p/BK3dCDVAEvn/ In addition, Umekes LLC two Poke restaurants, will be featured on the Discovery Channel, KGMB Hawaii and KCBS Los Angeles in December 2016.

Potential award recipients were required to be nominated by Official Best Of Researchers in order to be in contention for the Best of the Best Poke Bowls 2016, and were judged based on by merit, special 2 month research, and strong local support . Nakoa Pabre, Chef/Owner of Umekes LLC which includes the following businesses: “Umekes Poke Bowls and Lunch Plates” and “Umekes Fishmarket Bar and Grill” were pleased about the company’s performance, saying:

“We have worked hard over the past several years to provide the Best Freshest Poke to our customers and to our VIP Poke Club members, as well as educate everyone to traditional and modern fusion styles of Poke. It is exciting to see all that hard work pay off in this award and we are extremely grateful and humbled by this recognition.”

Official Best Of researchers located across the country spend at least 2 months per show compiling a collection of the very best attractions and destinations in each state. Once the research is complete and destinations have been chosen, a show is produced and aired. Each state’s show is promoted and aired within that state as well as on a national level, and also on the OfficialBestOf.com web site. One distinction that sets Official Best Of apart from many other travel sites is that it doesn’t accept advertising on either its television shows or its website. The selection of attractions is by merit, and it is with great pleasure that Umekes LLC has been selected within the State of Hawaii.