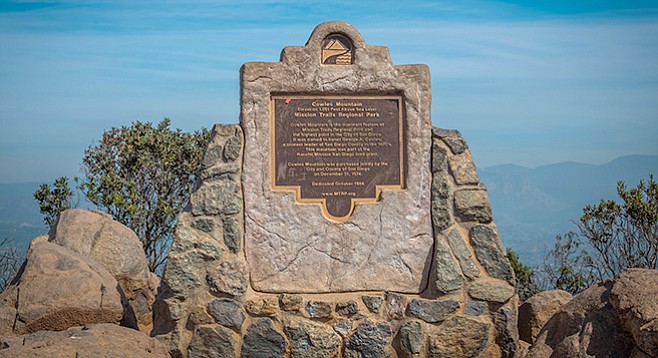 If popularity is any indication of quality, then the Cowles Mountain trail from the staging area at the intersection of Golfcrest Drive and Navajo Road is among the best in San Diego, if not the best. It offers one of the best workouts in San Diego, with a moderately steep climb of almost 1000 feet over 1.5 miles. It also offers spectacular views, interesting natural history, and a significant Kumeyaay archaeological site. 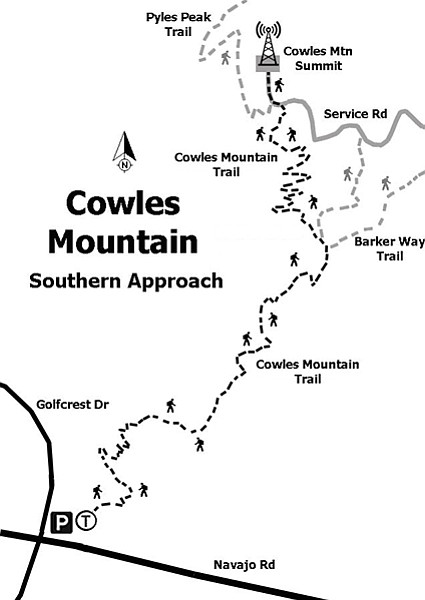 Begin the hike at the Cowles Mountain staging area, which is a great place to hang out and wait for your hiking party to assemble or to start a solo hike with the assurance of others on the trail if needed. The staging area has shade trees, which are in short supply on the trail. The staging area also has a well-maintained native plant garden, which is a great place to familiarize oneself with the plants that may be encountered on the trail. If it is spring, be sure to compare the California sunflowers (Encelia californica) with the San Diego sunflowers (Bahiopsis laciniata). The San Diego sunflowers have smaller, more wrinkled leaves, and their flower heads are somewhat different. If it is autumn or winter, check out the small flowers on the broom baccharis (Baccharis sarothroides). Broom baccharis provides nectar to insects during the time when little else is in bloom. It is dioecious, meaning that each plant is either male or female. Can you tell which plants are which? (Hint: the flowers of the male plants have pollen.)

As you start up the trail, look south for views of Lake Murray, also in Mission Trails Regional Park. The rock around Lake Murray is volcanic (tuff-breccia), unlike the rock of Cowles Mountain, which is plutonic (granitic). However, both rocks are of the same age, somewhat over 100 million years old, and of more-or-less the same chemical composition. Cowles Mountain is most likely part of the core of what was once an island arc volcano, and the rock around Lake Murray formed from the ash ejected from that volcano or other similar volcanoes nearby.

If you brought a hand lens, examine the rocks on the trail. The rocks are granitic, containing grains of black hornblende, whitish plagioclase feldspar, pinkish alkali feldspar, and gray quartz. The hornblende and feldspar weather out, staining the rock red (from the iron in the hornblende) and leaving small rectangular holes. Note the size of those holes: around 2 mm.

A little past the halfway point, the trail reaches the top of the prominent south shoulder of Cowles Mountain, near what was a Kumeyaay site for observing the winter solstice. The observatory site is on the shoulder, a little south of the trail. This area is closed off except for a few days around the solstice when a number of organizations lead early-morning hikes to observe the double-sun visual effect at sunrise that indicates the solstice.

Above the shoulder, the trail switches back and forth to the summit. This area was extensively renovated in the spring of 2013 to repair damage from hikers cutting switchbacks. Fences were added in an attempt to prevent future damage.

After reaching the summit of Cowles Mountain, look again at the grains in the rocks. The grain size (in particular, the size of the rectangular holes) is larger, now more like 3 to 4 mm. This indicates that the rock cooled more slowly, and was, therefore, closer to the heart of the volcano that is now Cowles Mountain.

The view from the top, the city of San Diego’s highest summit, is spectacular. On clear days, usually sometime in late autumn or winter, it is even possible to see two of the Channel Islands: San Clemente and Santa Catalina. The Coronado Islands, in Mexico, are often visible to the southwest.

If the summit area is overly crowded, or hot, cross the service road to the flat rocky area just north of the summit. It is usually less crowded, and there is often a cool breeze by the cliff. This is a good place to rest and have a snack before returning back down the trail. However, if not tired yet, head west a few feet down the service road (toward the antenna station) to the Pyles Peak trail for an extra 3-mile out-and-back hike, and an additional 850-foot gain/loss of elevation. 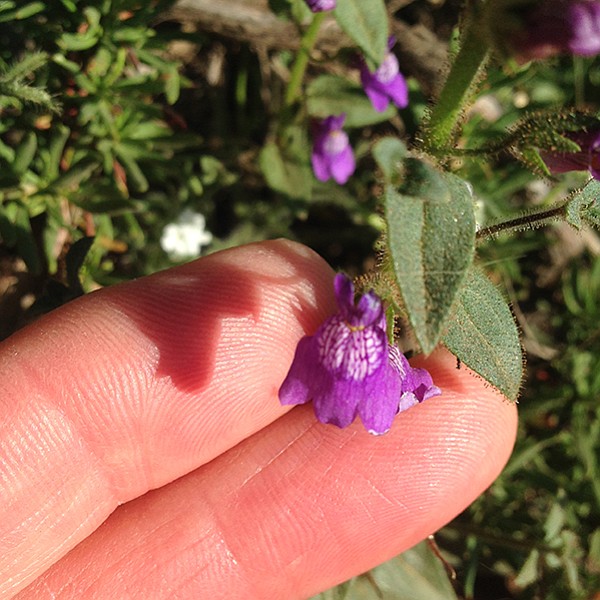 Spring flowers include the Nuttall’s snapdragon.

The best time to hike Cowles Mountain is in spring to see the diverse wildflowers and blooms on most of the shrubs. Cowles Mountain can be excessively hot in the summer, and the heat can be especially dangerous for dogs. In summer, either go early or late or even bring a headlamp to hike after dark. Late autumn and winter are good times to hike Cowles Mountain, and foggy autumn mornings can be spectacular when the summit protrudes above the clouds. The trail is good immediately after rainstorms, as its decomposed granite drains well and does not become particularly muddy.

This trip can become a low-carbon-footprint adventure by taking public transportation. The San Diego Metropolitan Transit System 115 bus stops at the corner of Golfcrest Drive and Jackson Drive, a block away from the staging area, and has hourly service on weekends. 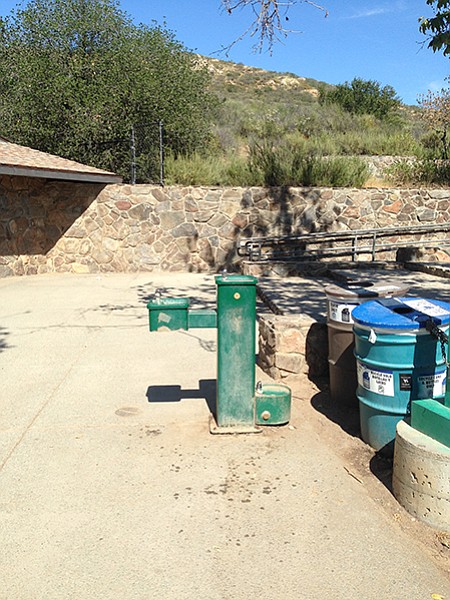 Distance from downtown San Diego: 13 miles. Allow 20 minutes driving time (San Carlos). From I-8 E, exit north on College Ave. and drive north 1 mile, turning right onto Navajo Rd. Continue 2 miles on Navajo Rd. to the Cowles Mountain trailhead on the northeast corner of Navajo Rd. and Golfcrest Dr. Park in the small lot or on the street.

Difficulty: Strenuous, with an elevation gain/loss of 950 feet. Facilities and water. No bikes, dogs (on leashes) allowed.