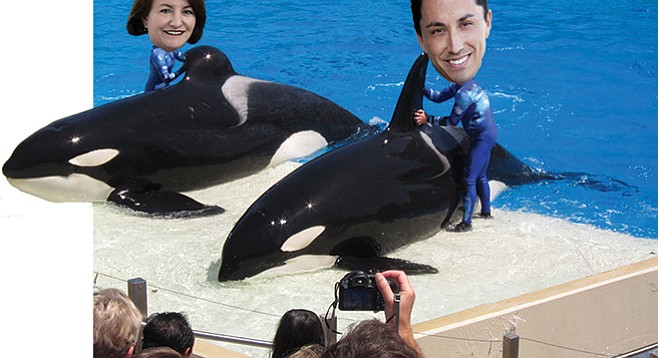 SeaWorld, besieged by animal-rights proponents who have forced a radical change in course for San Diego’s venerable whale emporium, remains popular as a free ticket destination for California lawmakers and staffers. As controversy over captive orcas swirled around the park earlier this year, Nick Hardeman, chief of staff for Democratic assemblywoman Toni Atkins, was down for a free admission worth $69 on Saturday, January 30. Katie Hardeman, a consultant to the Assembly budget committee, also picked up a $69 SeaWorld freebie, according to the firm’s May 2 lobbying disclosure report. On February 15, Republican assemblyman Brian Jones celebrated Presidents Day in San Diego with a $69 SeaWorld pass. Democratic senator Kevin De Leon hit the park up for a similarly free admission on Saturday, March 26.

Though criticized for its captivity of the giant marine mammals, SeaWorld has long been a favorite of legislators, who have received thousands of dollars in campaign contributions from the park, including Atkins, who has gotten a total of $8400 for her state senate campaign. Atkins ally, city councilman Todd Gloria, running to fill her termed-out Assembly seat, received $2500 from the company last year, along with $2000 from park president John T. Reilly. Other local beneficiaries of SeaWorld largesse, according to state filings, include the Greater San Diego Chamber of Commerce’s political action committee, getting $12,500; Ben Hueso’s 2018 state senate bid, with $2500; and De Leon’s 2018 campaign committee for lieutenant governor, also receiving $2500.

During Atkins’s tenure as Assembly speaker, a bill by Santa Monica assemblyman Richard Bloom to ban SeaWorld’s whale shows languished in committee before dying without further debate. Pronounced Gloria: “SeaWorld San Diego is a key city partner and a great contributor to our region, and I support its ongoing operation.” Said GOP assemblyman Jones: “Oh, I’m opposed to the bill; this is a direct attack on SeaWorld. It’s politically motivated. There’s no science, no biology behind this.” Finally, after years of pressure and falling attendance, SeaWorld park president Reilly announced this March 17 that the company was voluntarily halting all whale performances, and pledged not to breed any more orcas. Beside him at the news conference stood Atkins.