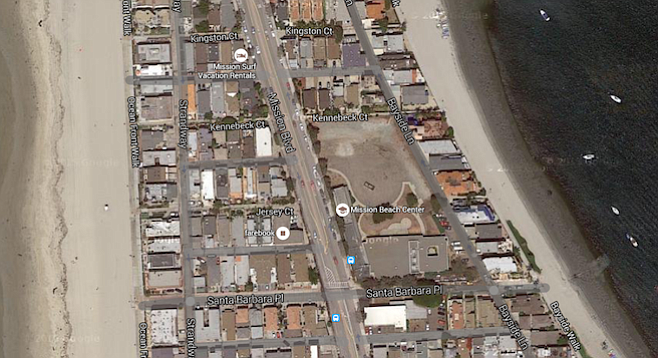 As promised, a group of Mission Beach residents has filed a lawsuit against the city and developer Christopher McKellar over a proposed residential development to be built on the site of the former Mission Beach Elementary School.

The disputed area lies east of Mission Boulevard, between Kennebeck Court to the north and Santa Barbara Place to the south.

In recent months, as reported by the Reader, residents have warned the city council that a lawsuit would be filed if the city granted the developer permission to build the project as proposed; city councilmembers did just that on April 11.

The battle began shortly after La Jolla–based developer McKellar McGowan purchased the 2.23-acre parcel from the San Diego Unified School District for $18.5 million in 2013. San Diego Unified built the elementary school along Mission Beach Boulevard in 1925. In 1950, it expanded with the addition of a six-lot parcel on Santa Barbara Place to establish a kindergarten. Two years later, in 1952, the district joined the two parcels to make one.

Months after McKellar McGowan purchased the property, residents learned that the developer was trying to separate the two parcels. McKellar McGowan allegedly did so, say residents, by creating a separate LLC to build the smaller of the two projects. Doing so exempted the smaller six-parcel development from any city-mandated park requirements. Instead of a .35-acre park, one that preserved a large ficus tree as a centerpiece, the developer proposed a .19-acre pocket-park.

During the April 11 council hearing, residents warned councilmembers that they were prepared to take the city to court if they approved the project. On May 10, their attorney Cory Briggs filed a writ of mandate on their behalf.

According to the lawsuit, the project violates the California Environmental Quality Act by failing to "provide adequate identification and analysis of significant adverse environmental impacts,” including traffic, parking, transportation, air quality, community character, and noise.

The complaint also says the council erred by allowing the developer to separate the project. Doing so prevented the council and city from considering any impacts caused by the entire development.

The group is asking that a judge prevent construction from beginning until all environmental violations are addressed. A hearing is scheduled for October 21.

Wish I could be in the room when the attorney deposition city staff. There was a formula the city lower staff used to determine the park size. Developmental staff management decided to use a different formula that created a 25% smaller park. Then at the hearing management did not even state his formula figures correctly.

The worst figure is the whole mess is Council member Laurie Zapf. There have been controversial issue the past years in Mission Beach. Redevelopment of Belmont Park, widening the boardwalk and alcohol on the beach. The community was always split on these issues one third one way, two third the other way. But in this issue 99% of the community opposed the size and location of the park, the private alleys, the size of the condos. Zapf gave the developers everything and screwed the community. She gave the community the big middle finger.

Zapf in a interview before the vote said how important parks were when she was growing up. The park she wants to give the community is worthless. 270 feet long averaging 40 feet wide between a three story building and parked cars along Missin Blvd. I would bet she never used a worthless park like that growing up. We all all not rich. Some poorer family rent a studio in the summer for a week in a staycation in Mission Beach. Not all little kids like the beach. It would have been nice to have a 80 foot by 150 park. Screw the kids and the community. Take care of the developers Zapf.