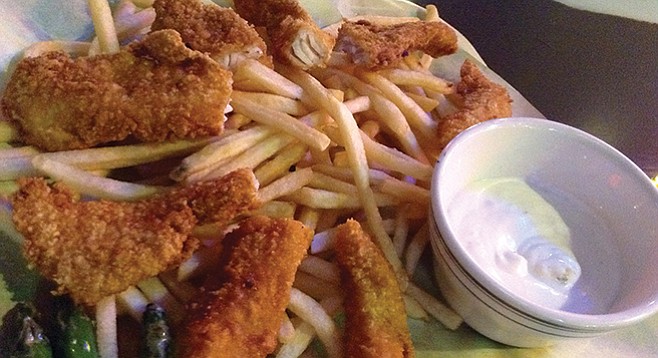 With all the taco talk this week, how come I missed this place?

I should have seen the taco deal on the signs outside. But I was busy trying to figure the name, “Cabo Wabo.” It’s on the bar’s storefront, here on 8th and Highland, in the oldest part of National City. Huh. I thought Cabo Wabo was a glitzy franchise up in Hollywood, Vegas, Tahoe. And that it was started down in Cabo San Lucas by Sammy Hagar from Van Halen, right?

This place, well, you’d think neighborhood bar, place that gets a little wild around 11 of an evening. Not your average celeb rocker’s hangout.

So, natch, I come in. And, inside — yes! Dive bar. “This Bud’s For You,” in neon on the wall, “Modelo,” and “Negra Modelo” on the mirrors. “Cerveza Indio” signs behind the bar. Pool room on the left, fusball table at the back.

Even now, around seven, bar’s crowded with guys who’ve been at it awhile. But I notice the gal they all call Angel is handling them like a football coach. She keeps it cheery, but she’s so in charge.

And music’s loud till you get used to it. Gloria Estefan. First big hit. “Conga”: “Come on shake your body, baby, do the conga/ I know you can’t control yourself any longer.”

Angel’s moving to the music as she shimmies up and down behind the bar with four or five Modelo bottles between her fingers.

“Something to drink?” she asks when she makes it back to me. They have a bunch of drafts, including Bud and Sculpin. So, here I make my first mistake. I go for the Sculpin. Bud’s $2.50, Sculpin $6. Oh, sure, I like it, the hop kick and all, but once you get past the first sip, you don’t notice. And you’re $3.50 lighter than you need to be.

Now Angel brings me a big plastic menu. Prices start small, grow big. Fish tostada is $3, shrimp’s $4, a dozen mussels’re $9, fish soup’s $10, and two soups I’m tempted by, siete mares (“seven seas”) is $13, and vuelve a la vida (“return to life,” for when you’re feeling really crudo). It has shrimp, octopus, and oysters swimming around in the broth. Costs $14.

Actually, they have tons of really good deals, like $4 quesadillas, $3 bean-and-cheese burritos, or two hot dogs with fries for $5, or bacon-wrapped for $6. But I decide to go for the “Super Cabo Wabo,” which is a burger with bacon, cheese, and guac for $7.95.

Two minutes later, I see my total taco mistake. Angel brings the guy next to me a plate with a tortilla laid out flat under a big log of battered fish and a ton of slaw, onions, and tomato. And some kind of sauce. Could almost be a meal.

Two of these and you’ve lined your stomach for as many chelas (brewskis) as you can take. And this cheapo taco isn’t a happy-hour special. You can get it anytime, all day.

Okay, I know. My eight-buck burger’s coming. But I say it anyway.

“Gimme one of those.”

And, really, one buck! When it comes, it’s that healthy Mexican combo of fresh salad with the fish, delish with a nice thick, dark bottle of gunk I shake out called Búfalo salsa. (It’s basically guajillo peppers, sweet and not too hot, plus lime juice. You’d think this’d be for carne asada, but it works super well with the fish, too.) 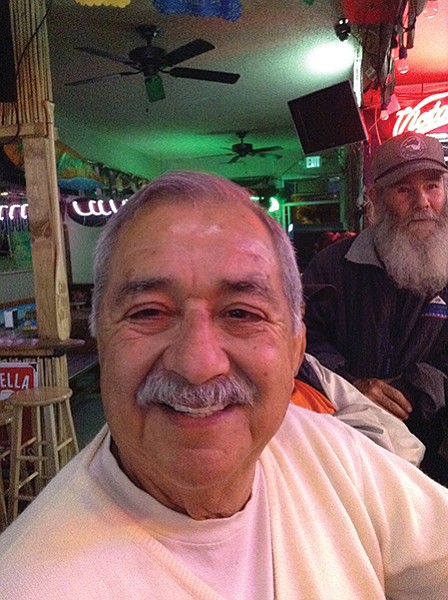 So, I’m kicking myself for not getting two of these tacos. But then my burger turns up with an avalanche of fries. And Angel’s also laid a plate in front of the guy to my left, Sal. Fish and chips, $6. Wow. Another deal: eight pieces of breaded fish with fries and some bulging green roasted chili peppers and a bowl of ranch sauce. That is a lot of fish for six bucks.

But I have plenty to eat. I order another beer to wash it down. Bud this time. 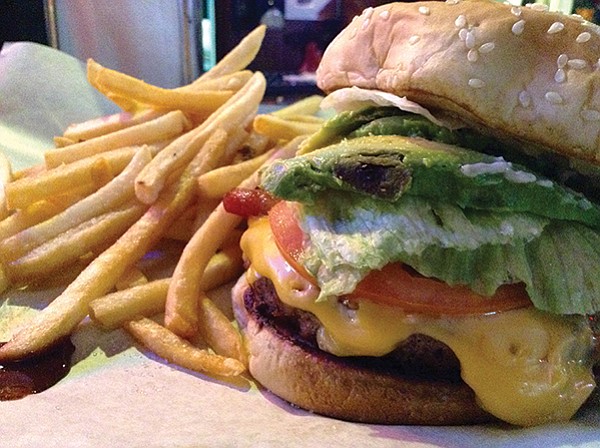 Bacon’s nice and thick, so’s the beef patty, and plenty of guacamole. I shake that Búfalo salsa on the fries, too. Get talking to Sal. He’s a painter. House painter. Also diplomat. “You’ve got to be diplomatic when a husband and wife are deciding what color they want their house to be,” he says. “But you know how it always pans out? The guy writes the check, lady decides the colors. Every time.”

Sal’s been coming in for the past couple of years. That’s how long this place has been here. “It’s good, it’s cheap, it’s friendly, it’s neighborhood.”

But, wait, what about the glam Cabo Wabo? And those franchises? I check this address’s website. No mention of the Sammy Hagar–Hollywood connection, whatever. 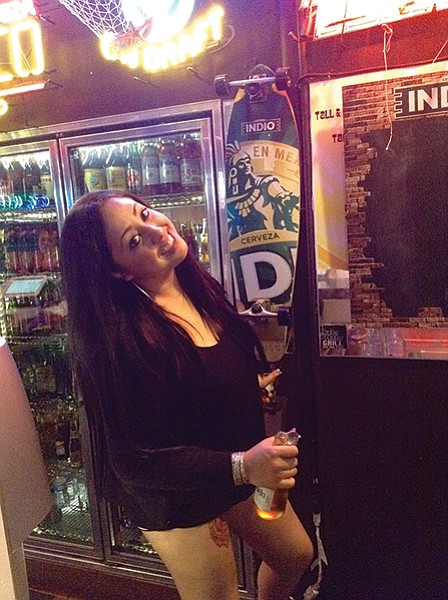 “There is another Cabo Wabo on Main Street,” says Angel. “Separate business. The husband-and-wife owners split up. She got one, he got one. Same name, though.”

By the time I leave, the place is really starting to rock. Lots of Spanish, lots of campechanas (octopus and shrimp cocktails), siete mares caldos, micheladas getting ordered.

Dang. Love to get Carla over here. But, probably next time I pass I won’t be able to resist a li’l $3.50 party: buck for the fish taco, two and a half for the Bud.