Obscure and fractious ideas in Dinner With Marlene 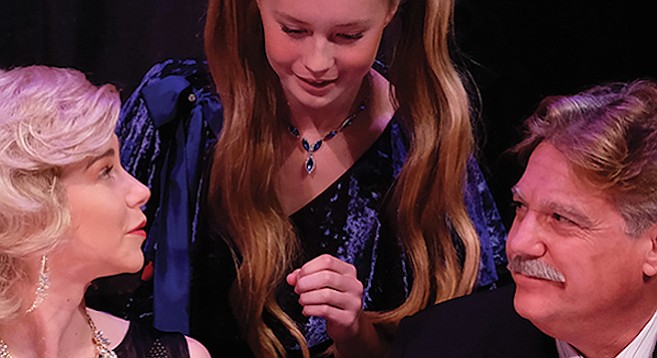 The conflict between Old World aristocrats and American New Money was once a real concern. The peerage dreaded the inevitable wresting from their hands of social privilege by plucky upstarts with Gilded Age fortunes. In a more abstract way, artists and other big thinkers pondered what this meant in the lives of those outside the old social order. This is much less a question a century down the road, but the tensions of the early twentieth century still crop up from time to time.

In Lamb’s Players Theatre’s world premiere of local playwright Anne-Charlotte Hanes Harvey’s Dinner With Marlene, historical Woolworth heiress and socialite, Barbara Hutton, suffers aristocratic, stage-whispered snickers. Actress Rachael VanWormer hams up mispronounced French, and “Babs,” as the snidely Europeans call her, comes off as an accurate portrait of the poor little rich girl: a well meaning lady ill-fated to a life of abuse at the hands of the social elite. Yet Babs — with her guffaws and reliance on champagne as a de facto marker of elegance — exemplifies a quintessential virtue of her stereotype. Her generosity, however naive, is real, and her express concern with social justice has no echo in the consciousness of the European elite.

The framers of the U.S, Constitution expressed real concern about the role of leaders (whether elected or by dint of fortune) in the 18th century. They did not want kings and aristocrats. Herman Melville’s Poor Man’s Pudding and Rich Man’s Crumbs serves as a biting, 19th-century indictment of the aristocratic disregard for the lives of the poor. Gatsby questioned the wisdom of wealth in and of itself in the 20th century.

An interesting idea on today’s political fringe holds that the United States has lost its fear of the aristocracy. Some say the idea of, for example, Clinton and Bush political dynasties is distinctly anti-American because it reeks of a rising plutocracy. One blogger makes a compelling case that, in the long term, we quietly lost the Civil War, and that a new and “brutal” American aristocracy would make us all slaves if they had their way.

Obscure and fractious as these ideas may be, they’re within the scope of Dinner With Marlene. There are a lot of ways to respond to the play’s easy, obligatory Trump joke (don’t worry, no spoilers here); but the correct one must acknowledge a cultural battle 250 years in the making.