At issue with the issues 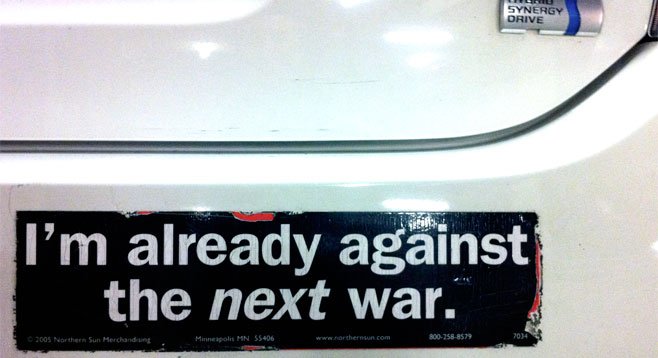 Recently you published a cartoon alluding to the Chargers having never cared about Junior Seau (Obermeyer, May 5). And now they build support for their new stadium using his memory. As if that’s in any way accurate. 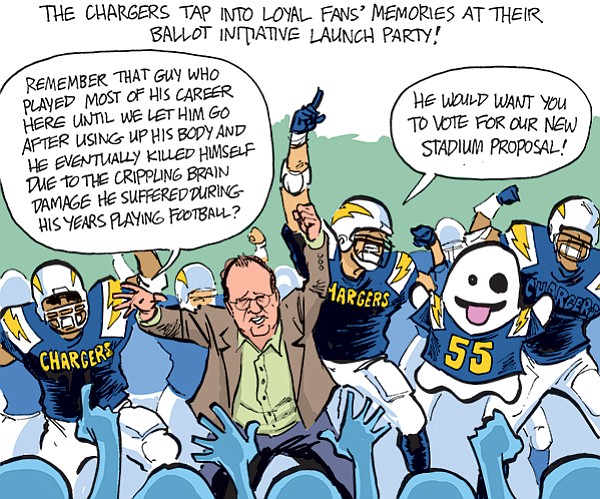 I don’t find this funny at all and could not be more infuriated with how disrespectful this is to Seau’s memory. He loved this city and would be doing everything in his power to keep the Chargers here. Whoever created that heartless, uninspired cartoon knows nothing about Seau and cares nothing about this city.

Your paper does such a disservice to this city every time you publish nonsense like this trying to undermine what the Chargers are doing. I don’t understand why the Reader has an anti-Chargers agenda. Perhaps you think there are more transplants that read your paper, or that people are still upset about Spanos trying to leave. Now that they are trying to make amends and do something that would be truly incredible for this city, your staff does nothing but obstruct their efforts.

If you actually had anyone creative or inspired working there, you could try being positive and optimistic about all the opportunities a new stadium brings to San Diego. Or you can just keep swiping at that low-hanging fruit like you’ve been doing.

Every 911 phone call is important and should not be ignored or put on hold. We need to find a better solution to this than putting a person on hold when calling 911, as was done on March 20 in O.B. when resident “Michelle” was denied a phone call while her life was in jeopardy.

We need to trust our law enforcement agencies and rescue agencies because accidents and incidents happen every day! An e-mail does not cut the chase in today’s society, and too many calls on hold is not an excuse to hang up the phone. We need a better solution on this topic in San Diego County and surrounding areas or somebody is going to be in great danger or even worse. Your input counts, San Diego!

When San Diego Had Two Coffeehouses

Daniel Beeman’s comments on a changing San Diego were spot on. In 1968, my young husband and I rented a beautiful, freshly painted studio apartment in an old building on Madison and Park Boulevard in University Heights for $70 a month. Later we rented a very comfortable duplex in North Park that was $150. As Mr. Beeman indicated, these neighborhoods served the working poor.

North Park had a Penneys; some simple, cheap cafés and Mexican restaurants; and a day-old bread store. You could get a $4 haircut at the beauty school on 30th.

In that era, there were exactly two coffeehouses in the city: Quel Fromage in Hillcrest, and a second one downtown on Ninth and G Street. Visiting a coffeehouse was a rare treat, akin to the ones on Columbus Street in San Francisco. Now, coffeehouses seem to be an absolute bore. How many hundreds are there, anyway?

Wages have risen slightly over the years, and housing astronomically. San Diego in 1968 was a lovely, quiet, sunny, relaxing town with pretty beaches and those inspiring mountains to the east. Now it’s a mob scene, traffic everywhere. And don’t forget the ever-present breweries.

P.S. Barbarella, you really need to find a better book club (Diary of a Diva, May 5, “I Like Raccoons”). How could anyone enjoy that snob ambience? You’re better than any of them!

County Residents Should Pony Up

Why is it so difficult in keeping with Anaheim at 17% or San Francisco at 16.25%? Therefore, the “tourist” who stays in El Cajon or La Mesa, etc. can rest assured that they will not be paying the extra transient tax.

I do loathe, however, the fact that the county does not pony up currently at Qualcomm or Petco Park. Can’t believe these geniuses haven’t figured this out. County or outside residents should pay extra for these tickets.

Built on the Backs of the Homeless

I’m calling to comment on the letter by Jeremy titled, “How Am I a Tourist?”

Jeremy, you’re so right. It’s really true that many of the people who live in hotels all over San Diego are one step from homeless, and many of them are residents — since you become a resident after 90 days of residing here. So, they are going to build this stadium on the backs of the homeless.

Every president on this has been a failure, from Roosevelt on. Obama included. Thank you, Jeremy, for your insight.

Those people who live here for over 90 days are residents, yet they are paying that incredible tax every week, every day.

Patron Saint of the Republican Party

The Treaty of Versailles was signed with almost no German participation on June 28, 1919. The Great War had ended, bringing embarrassment and hard financial times to a once proud nation. German leaders were looking for scapegoats and they were easy to find. Jews, homosexuals, Poles and even the disabled were targeted for extinction during the ensuing 25 years. Sound familiar?

The candidacy of presidential contender Donald Trump is not one of assimilation but rather one of annihilation. It is a furtive movement to maintain America’s white identity. His followers disavow political ideology in favor of a dream of what not America could be, but rather what America was several generations ago.

The truth remains that the real and current sleeping giant and danger to our democracy is the so-called silent majority. The same was true of Germany from 1919 through 1945.

In reality, most common citizens don’t believe a national catastrophe is possible. When American cities such as Los Angeles, Detroit, Chicago, and Milwaukee were torched in 1965 and 1968, African-Americans and left-leaning radicals were deemed culpable in a culture that obsesses with the rule of law. But what Americans can’t seem to understand is that when you cage and taunt a rat, the rat will respond in kind.

The human condition in our nation is a sideshow, and most self-righteous citizens cannot digest the truth. The myth of control is seldom, if ever, taught in our schools. So, from cradle to grave, we cling to the fallacy of the rule of law.

When French banks and American corporate interests tightened the financial noose around a German nation in the 1920s, its leaders found scapegoats as an escape from their misery. Sound familiar?

The proposal of Donald Trump to build a wall separating the United States from Mexico is not only immoral, it is hypocritical. On June 12, 1987, President Reagan, patron saint of the Republican Party, implored then Soviet Leader Gorbachev to “Tear down this wall.” Why would the leading country in the free world build a wall?

Maybe we ought to disassemble Lady Liberty and send her back to France.

Ashes of hate will rain on America upon a presidential administration of Donald Trump, and the rule of law will not suffice. Make no mistake that the governor of California has not put out notice to hire the National Guard for sake of Fourth of July festivities, and likewise for the Cleveland Police Department to buy more body armor.

It’s going to be a long hot summer. Don’t get burned.