A little taste of Loreto in San Diego. 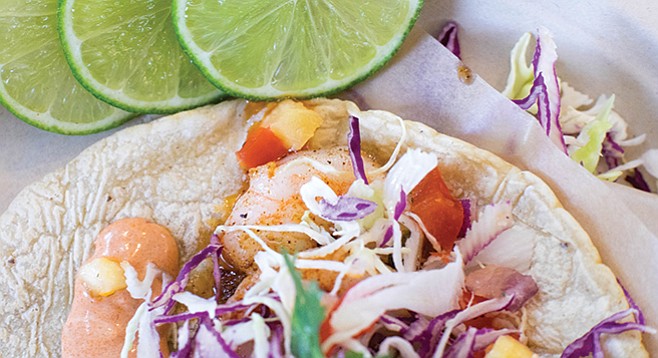 I spent February and March in Loreto, Baja California Sur, a charming town on the Sea of Cortez that dates from 1697. Small and friendly, the place made it easy to settle into a routine no more strenuous than deciding which taco shop to visit that day.

Most were pop-up stands, some had a small room with plastic tables and chairs, and the owners were as friendly and unpretentious as the food. The best tacos I ate were the simplest — grilled meats or fish, slow-cooked stews, garnished with fresh herbs and a squeeze of citrus. It was hard to leave.

Fortunately, I live in San Diego, so I can (almost) relive my taco adventures much closer to home. 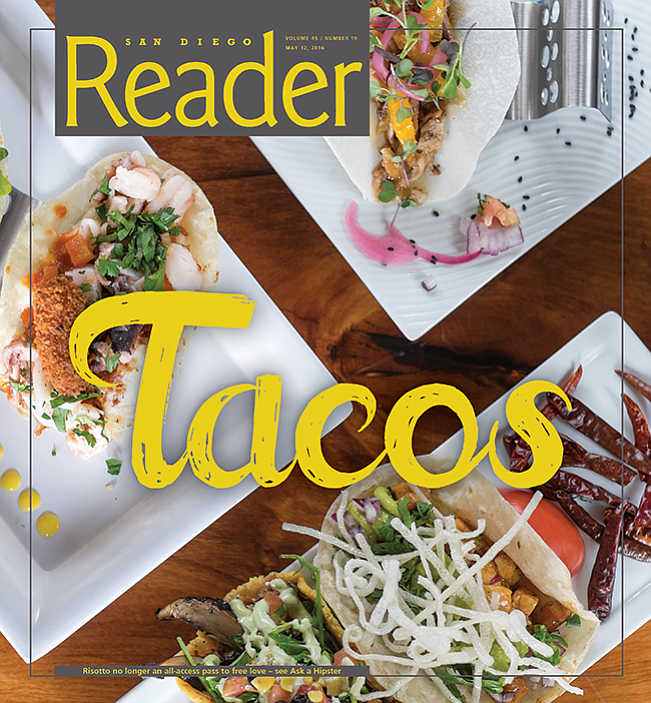 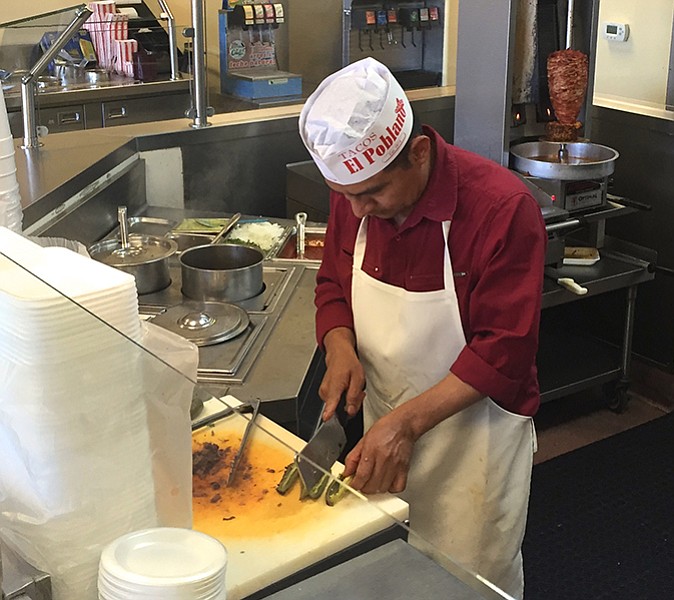 The owner of Tacos El Poblano opened his first restaurant in Tijuana in 1974, and the menu here in Chula Vista is as spare as its namesake’s — mesquite-grilled carne asada, adobada, or birria, no fancy sides, no garnishes. Adobada, spit-grilled pork marinated in pineapple, chilies, achiote, and spices cooks slowly on its trompo, tangy sweet and piquant, ready to be thinly sliced into warm tortillas. Carne asada is well caramelized and nicely smoky under chopped onions, cilantro, tomato salsa, and creamy guacamole. Birria is mildly spiced but no less delicious, and the pickled onions and carrots (escabeche) are refreshingly zesty. 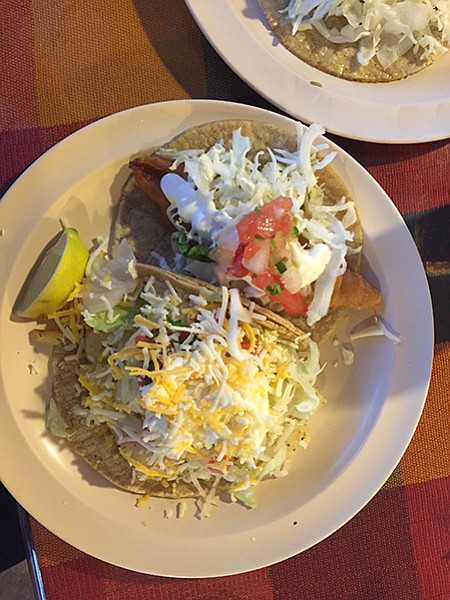 I can’t discuss tacos in San Diego without paying homage to our beloved surf-shack shops and our citywide obsession with Baja fish tacos. Bird Rock favorite Don Bravo never fails to satisfy my craving for shatteringly crisp beer batter cradling tender, moist fish, heaped with cabbage, tomatoes, cilantro and just the right amount of crema. Smoked tuna is a nice change of pace but then there’s also the grilled mahi, the octopus, or the shrimp. Fortunately, Don Bravo’s tacos come in both street and regular size, so you can order lots of different stuffings without breaking the bank. 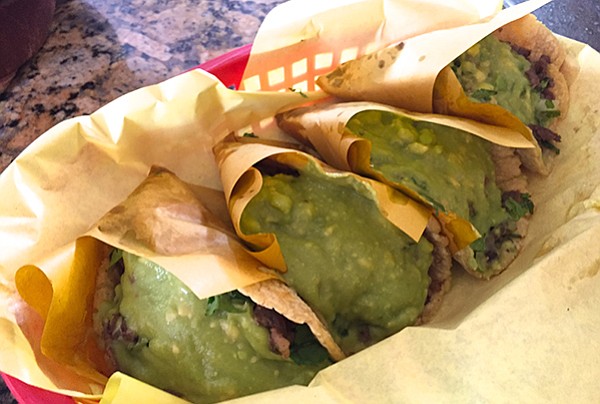 Despite eating tacos almost daily in Loreto, and the two-hour border wait, all I could think of was stopping at Taqueria Revolucion for carne asada street tacos, grilled crunchy, swathed in onion/cilantro relish and guacamole. The beef is well seasoned, chopped chunky, and has a pleasant chew, as does the sturdy house-made tortilla. The Birria Quesatacos pair mildly spiced stew with soft, milky melted cheese — it’s worth it to get a cup of flavorful consommé on the side for drizzling or dipping. A squeeze of lime rounds out all the flavors. 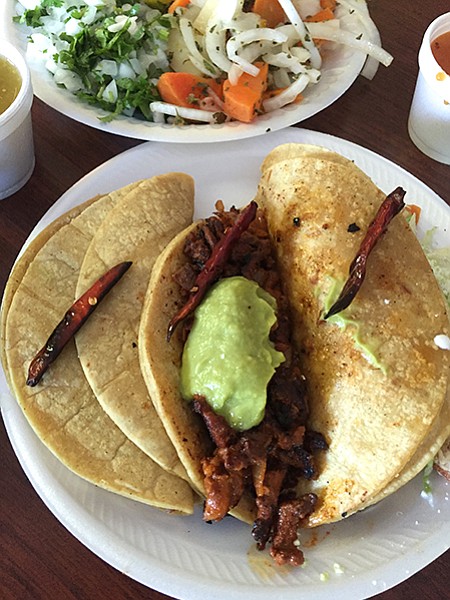 The name says carnitas, but don’t let that stop you from ordering one of everything. Carnitas Las Michoacanas seems to do all their meats really well. The al pastor has a lovely sweetness, the juicy carnitas puts its double tortilla wrapping to the test, and both the carne and pollo asados have plenty of spicy and savory grilled flavor. My favorite is the Taco de Chicharron, belly meat seared and glistening with luscious porky goodness. Generous portions of meat come simply adorned, fresh garnishes and salsas are served family style — the escabeche is house-made and particularly tasty. Cash only, ATM inside. 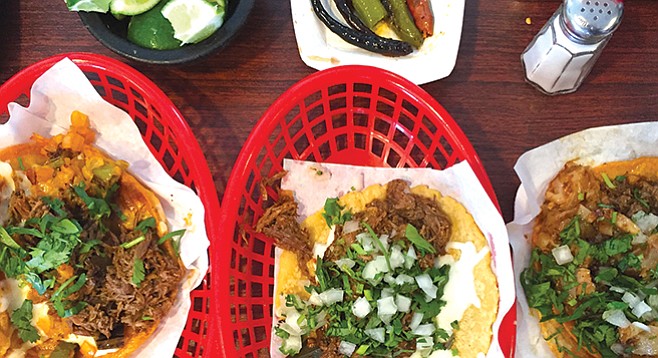 Birria is the big thing here, with good reason — it’s probably the best I’ve ever eaten north or south of the border. Slow-cooked to melting tenderness, liberally piled on a house-made tortilla, it’s wonderfully aromatic and comforting, especially when given a good dip in the excellent consommé. Go over the top just a bit by adding succulent nervio (tendon) or lengua (tongue), or heat it up with a chupacabra: lightly fried tortillas, onions, serrano chiles, and melted queso under a bed of birria. Extra points for outstanding service. Go early. They are open Wednesday through Sunday, 8:00 a.m.–2:00 p.m.