But — shocking! — we come up empty in IPA categories 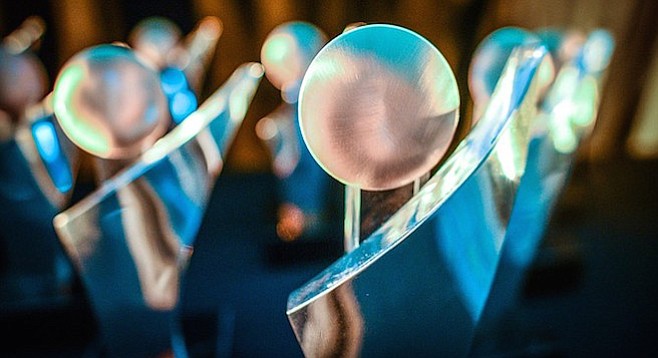 Brewing's most prestigious global contest takes place every two years and has only become more competitive since it began 20 years ago with 250 breweries. This year, 1907 vied for medals, representing 55 countries and fielding 6596 beers — a roughly 40 percent increase over the 2014 contest when San Diego won 11 medals and 4 golds.

"It's so competitive these days," said San Diego Brewers Guild president Mike Sardina, who attended the awards ceremony in Philadelphia Friday night (May 6) along with a large contingent of local brewers. “Fourteen medals is impressive."

Mike Hess Brewing actually took one of those German categories, winning gold for its Claritas koslch — adding to the gold it won in 2014. Oceanside's Breakwater Brewing also won its second gold, following a 2010 medal with rye beer winner Rye Dawn.

Yet, San Diego's awards haul did not include the beer style its best known for: it was shut out of Imperial and American IPA categories, the most competitive with 181 and 275 entries apiece. However, Anaheim's Noble Ale Works medaled in both on its way to winning three medals and being named champion small brewing company.

Orange County enjoyed a bit of a coming-out party, winning 10 medals overall. Anaheim's Bottle Logic and Brea's TAPS won two medals apiece. As competition manager Chris Swersey pointed out, "It was extraordinarily difficult to win more than one award this year. Only a small handful of brewers did it."

The only San Diego brewery to do so was Ballast Point, winning silver for Piper Down Irish red ale, and bronze for Pumpkin Down, a pumpkin beer version of the same.

Another success for Southern California was Beachwood BBQ & Brewing out of Long Beach, which earned 3 medals and the distinction champion large brewpub. Perhaps the event's most compelling story was the success of Japan, which tripled its 2014 haul by booking 9 medals, 5 of them gold.

"World-beer cup is certainly an international competition," Sardina said. "I think that we showed very strong and I'm looking forward to see San Diego brewers crush it at GABF this year."

Video of the ceremony here.