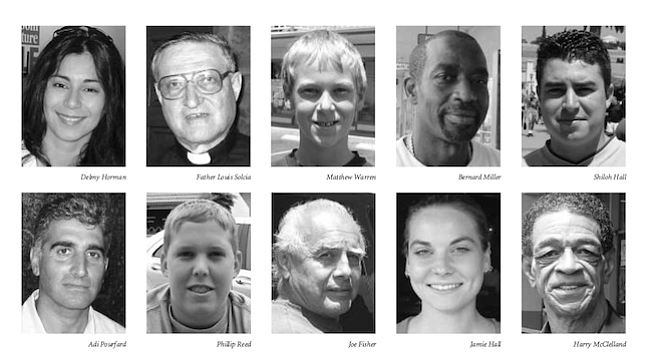 Nawaf Alhamzi, Khalid al-Midhar, and Hani Hanjour tried to get more from exotic dancers. "We may not be nuns, but Kerry and I aren't alley-cat sluts."

The Sunday People, a London tabloid, is out with what it says is a true account of the local strip-club revels of Khalid al-Midhar, Nawaf Alhamzi, and Hani Hanjour, the three terrorist hijackers with San Diego connections. According to the paper, the trio "blew at least $15,000 of terrorist funds in dozens of strip bars in San Diego on America's West Coast. A Sunday People investigation has discovered how the terrorists made a mockery of their strict Islamic beliefs by...SHAMELESSLY stuffing banknotes down the bras and knickers of the dancers." 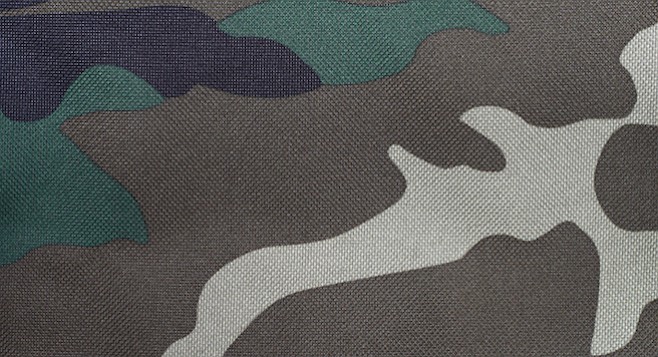 War: what is it good for?

Who Will and Won't Fight and Why

Many San Diego stores display the American flag and patriotic slogans, such as "United We Stand." Many draft-age men wandering in and out of those stores, however, don't seem ready to join the fight.

Loc Dinh, 21, works at the Fifth Avenue Card shop near Fifth and University. He has reservations about who is to blame for the terrorist attacks. "It's easy to say we're fighting a war if we know who the enemy is. I think in this case, that question is very ambiguous. I wouldn't necessarily want to jump off to war, not knowing who I'm fighting, and not wanting to accuse someone unjustly without knowing all the facts." 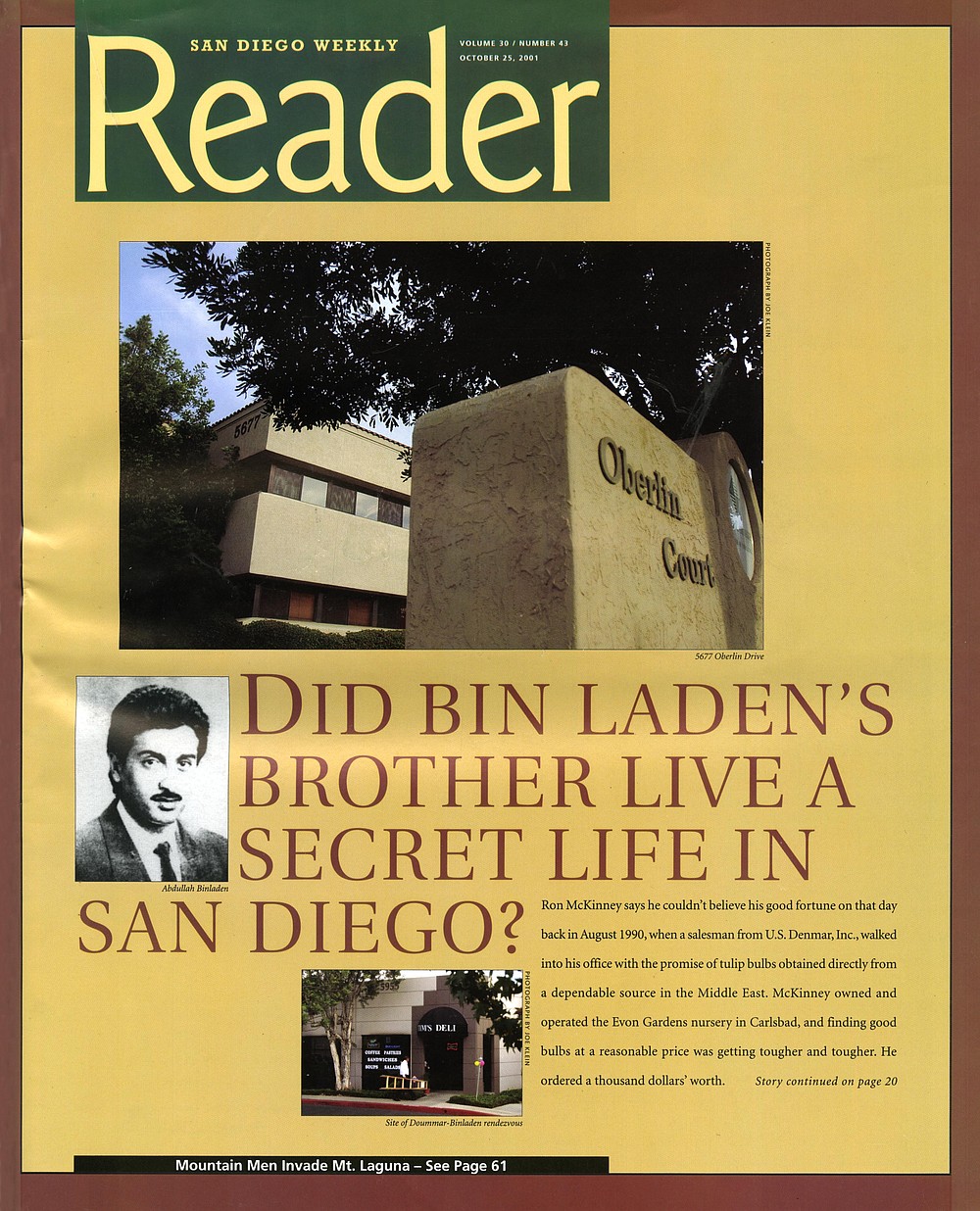 Before Binladen went to Harvard, says a man who identifies himself as Binladen's one-time partner in U.S. Denmar, the young Binladen was a man about town in San Diego, dabbling not only in tulips but dealing in Rolls Royces and Porsches as well. According to this man — a native of Syria who says he linked up with Binladen through connections he made at a small delicatessen on Mira Mesa Boulevard — the wealthy Saudi was attending a local university, studying either international law or business. 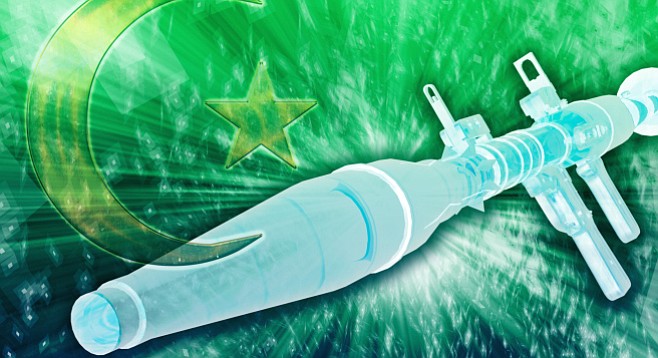 Le Travel Store sells luggage, travel equipment, and books from its Gaslamp Quarter store on Fourth Avenue. Owner Joan Keller believes the 9/11 attack nearly destroyed the travel industry. "It was immediately devastating. When you hear that travel has come back, it really hasn't come back in any sort of adequate way. It's still way down. What I read in industry media is that there are 25 percent fewer airline seats sold, and our business is down 25 percent. 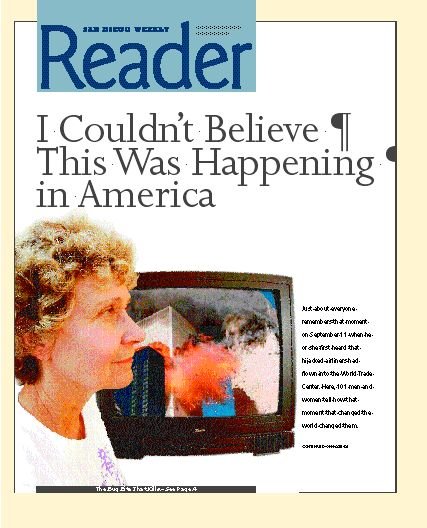 I Couldn't Believe This Was Happening in America

Sheila Sample, 44, is a licensed nurse who lives in Shelter Valley, between Julian and Ranchita. “I was standing in my living room. My husband had the TV news on. It was total horror. All my family’s back there. I have a nephew who is a firefighter, a niece who is a police officer, a sister and a niece who both worked in a restaurant at the top of the World Trade Center. I cried and just watched. I was zoned out all day, glued to the news, trying to get through back East to find out if everybody was okay. 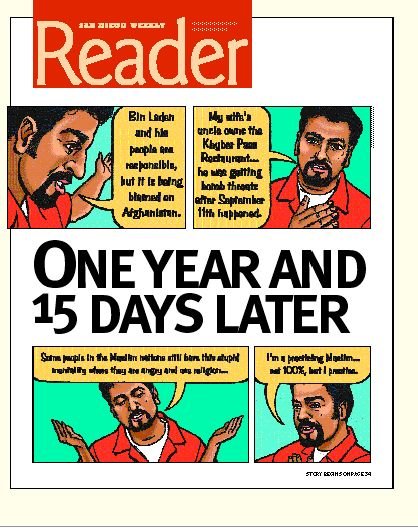 One Year and Fifteen Days Later

Maheed Mosazeli won’t disclose her age. “I’m old enough!” She lives in Normal Heights, near the restaurant she owns and operates in University Heights. The daughter of an Iranian diplomat, Mosazeli spent several years in Afghanistan and moved to the United States 14 years ago.

“I don’t know who I blame for the attack and crisis. I think the United States is to blame for the attack more than anyone, because I think they have the ability to know what is going on in the whole world, so they should have known it was coming. I usually think that the United States can do anything. I was thinking that of course they are taking care of the crisis to the best of their ability."