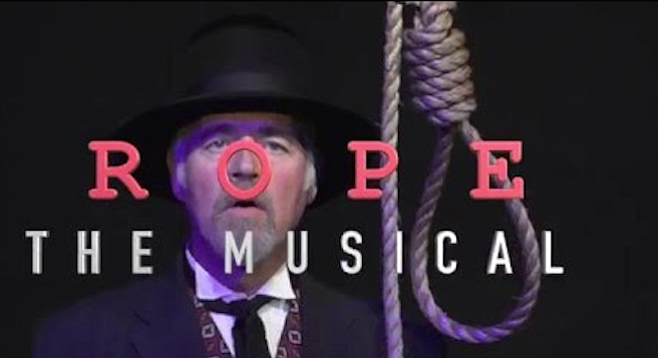 “There are two types of stories: one where the protagonist leaves town; the other, when she arrives,” playwright/librettist Mark Sickman preps the audience. “An example of ‘leaving’ is Huckleberry Finn, while Streetcar Named Desire and Six Degrees of Separation are examples of ‘coming and staying.’” Rope, Sickman tells us, is the latter.

We’re in a Presbyterian church in Summit City, Arizona, 1895. In the first number, the sprightly “Wondrous Cross,” the minister (versatile Paul Morgavo) and the choir sing a paean to love, forgiveness, and redemption.

As the same time, the town can’t wait for the hanging of a convicted murderer. Noah McMartin (full-of-verve Edgar Diaz-Gutierrez), the young reporter and publisher of the Summit City Adviser, wants to document all the details of the “civic event.”

From the beginning, the piece has a vague quality. The tone, which jumps around, is neither serious nor laugh-out-loud funny: Is this an accurate representation of the American Southwest in the 19th Century? Or a spoof?

Deputy marshal William Maledon (solemn and dignified Dennis Holland), based on a real hangman, dispenses “justice with dignity." But he questions killing people for a living. A telegraph from Washington may solve his problem. His wife Mildred (Natalie Nucci) loves the fanfare hangings bring out in the townsfolk. When the conductor on a train sings “Soft-Steppin’ Bill,” and paints a glowing portrait of her death-dispensing husband, Mildred thrives.

Here as elsewhere, the tone wavers. If the musical intends to be serious, it falls short. Themes like love and forgiveness receive superficial handling. Neither the writing nor the acting fleshes out authentic feelings. William Maledon’s soliloquy, for instance, lacks psychological depth.

In “The Scaffold Song,” William and Mildred question his line of work while doing a full-out dance number. The result is downright morbid.

Which begs the question: is Rope a comedy, a spoof, or a drama? It sounds and looks like a spoof. But tries not to be?

As Mildred, belle of Summit City, Natalie Nucci is dressed to the nines (kudos to costumers Janet Pitcher and Beth Connelly). But while she portrays urbanity, and her acting’s superb, Nucci’s verbal delivery — the accent has an air of ‘30s Hollywood — doesn’t fit the humble, Old West aura of the production.

Talented Paul Morgavo plays several distinct characters. As Mordecai, the telegraph operator, he delivers a red-hot piece of mail that alters the arc of the story. Mordecai wears an obviously villainous handlebar mustache — for comic relief? But from what? If the drama that precedes and follows his appearance were more deeply felt, the contrast would have been effective. But here, not so.