With credit to the fight choreographer 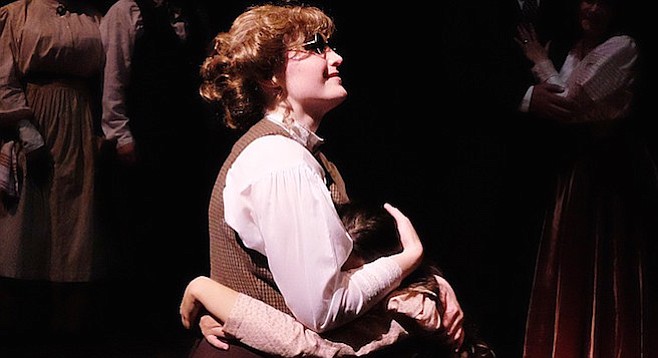 When the house lights go down at the start of Lamb’s Players’ current revival of The Miracle Worker, the audience gets an uncomfortably long moment of pitch-black silence, providing some appreciation for Helen Keller’s blind and deaf world. Then, as garbled and distant sounds slowly fade in, we see a small pool of light and, finally, Helen’s hands grasping symbolically at meaning. It’s an affective and affecting opening sequence. As it turns out, the most compelling scenes tend to be the wordless, or nearly wordless, ones. It seems fitting that a play about silent communication should be at its best when immersed in that silence.

The story, based on Helen Keller’s autobiography, is probably familiar. Her parents realize they can no longer help or control their child and hire young Anne Sullivan as an alternative to placing Helen in an asylum. When Anne first meets her charge, Helen is unruly and prone to tantrums. Anne begins teaching the child manners and obedience. However, out of pity and guilt, Helen’s family indulges her every whim, creating conflict between Anne and the Kellers.

As Anne teaches Helen to finger-spell, she realizes her student doesn’t understand the meanings behind the gestures and sees this merely as a memorization game. All Anne needs is one word to crack the safe of Helen’s mind.

William Gibson’s Miracle Worker was a Broadway hit in 1959 and became a film in 1962, which garnered Oscars for both Anne Bancroft and Patty Duke. While it hasn’t lost its ability to move the audience, the well-worn play is a bit clunky.

Director Robert Smyth has smartly tightened up this production, telescoping much of the early exposition and scenes concerning Anne’s personal history. Instead of three acts, we get a 90-minute intermissionless play that focuses on Helen’s first few turbulent weeks with Anne.

Cynthia Gerber, as a warm and gently persuasive Mrs. Keller, serves as a suitable foil to her husband’s tough on the outside/soft on the inside character. And Yolanda Franklin gives a nice turn in the largely thankless role of the house servant.

But the play belongs to Kelsy Venter and Lucia Vecchio as teacher and student, respectively. Venter balances Anne’s self-doubt, compassion, and need for redemption with brashness and unwavering persistence. Vecchio gives a committed performance, creating stylized movements and physical tics as Helen’s only means of expression. And even in her kicking, slapping, moaning tantrums, Vecchio gives us glimpses of the keen intelligence waiting to be set free.

In one of the play’s highlights, Venter and Vecchio vie toe-to-toe in a battle of wills. Once the airborne spoons, spewing of eggs, and manhandling ends, the actors look about as ravaged as the dining-room set. Credit to fight choreographer Jordan Miller for the manic brawl.

Lamb’s may not work a miracle on Gibson’s creaky play, it’s worth revisiting based on the strength of its leads.

Saw this last night, and I agree, Vecchio's performance was very strong. While the play is not cutting edge, it does illuminate a great moment in education--which came close to never happening. The breakthroughs (that Annie Sullivan and Helen Keller made) led to many more people getting a chance at education once methods were adapted.

It would almost be worth it to add an epilogue, especially if the performance is for school children who might not get the significance.