When Bill Clinton claimed the couch

Bubba napped with the sharks at Birch Aquarium 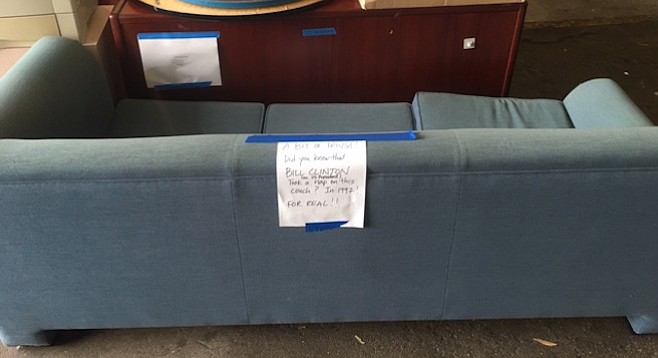 A piece of old furniture is getting jettisoned in the Birch Aquarium’s office remodel: the couch Bill Clinton took a nap on in 1997. 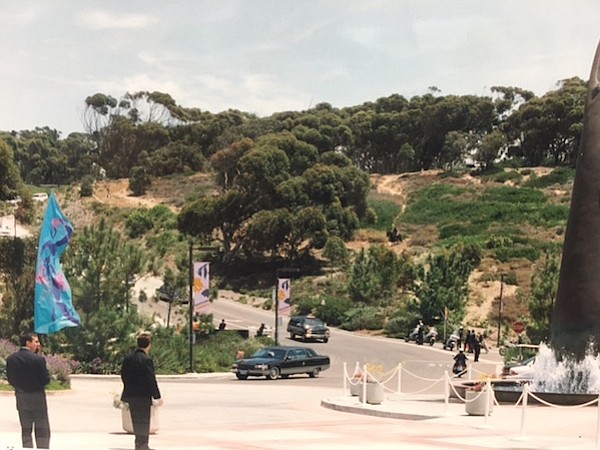 Clinton gave the UC San Diego commencement address that year, then went to the aquarium for a luncheon and press conference to speak about affirmative action. He was on site for six hours, got sleepy, and asked if there was somewhere he could take a snooze. Aquarium staff there at the time said, “The couch was the best we could offer!”

“I remember taking one of the Secret Service guys — a really big guy wearing a bulletproof vest and holding a really big gun — up the catwalk to feed the nurse shark. He was actually really scared to feed him. I remember laughing at him and telling him, ‘You walk around with big guns protecting the president from potential danger and you are scared of feeding the nurse shark?!’"

Mick Curzon, head of the facilities department, was also there that day.

“There were Coast Guard boats out there patrolling by the pier and snipers on the roof and in the bushes.” In charge of maintenance, Curzon was allowed to roam the premises. Other staff could only access certain areas.

“The Secret Service gave me a badge to show I wasn’t a threat. They came the day before to check out the whole place.”

Secret Service also vetted the workers: some were allowed to stay but most were asked to go home for the day of the presidential visit.

Though I’ve worked at Birch for five years, this is the first I’ve heard about the Clinton couch. The teal plush couch has been part of the office decor since circa 1992, when the current Birch Aquarium facility opened. I, too, took a nap on it once, during my lunch hour on a Saturday, unwittingly dozing where Bubba had laid his drowsy head. Now it’s been relegated to the service yard to be carted off by the UC San Diego surplus sales and disposal unit.

UCSD should have auctioned off the couch. The proceeds could then be used for research on sex addiction.

Java - you set this up. The couch would have to be thoroughly checked for stains first.

ShirleyB You naughty girl. The article said others slept on the couch since, so God only knows what an exam might turn up. Perhaps the best thing to do is to have it shrink-wrapped in plastic.