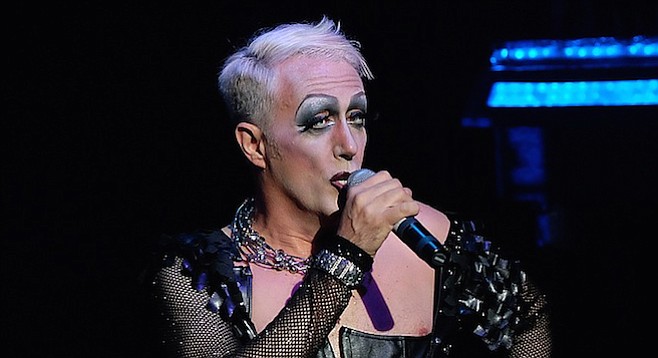 Talk about gumption: Sean Murray, artistic director of a major local theater company, cavorts on stage in layers of splotchy make-up, a black leather bustier, fishnet stockings, with holes, and, for the final “floor show,” pink high-heeled shoes. As Frank N. Furter, the “sweet transvestite from Transsexual Transylvania,” he encourages audiences not to dream their fantasies, but be them.

Oscar Wilde said, “I have no objection to anyone’s sex life as long as they don’t practice it in the street and frighten the horses.”

Well and good. But, Sean: what about frightening the Cygnet Theatre board? Hey, given the show’s infectious, mad-dash spirit, they’ll probably do the post-curtain “Time Warp” as well.

“With a bit of a mind flip, you’re into the time slip, and nothing can ever be the same.”

One can’t “time slip” back to O.B.’s Strand Theatre to see The Rocky Horror Picture Show Saturdays at midnight. The audience, dressed and cross-dressed as the characters, was the star. As Tim Curry’s Frank N Furter might say, it was a classic example of audience partici — “say it!” — pation.

The story’s a patchwork of B-movie horror plots: innocent couple (okay, really innocent, teeth-gnashing innocent), dark and stormy night, lightning-splattered castle. But the castle is also a spaceship where, after a night of unfettered dalliance and murder, Riff Raff and Magenta enact a coup d’etat.

For those who went to the Strand, or are fans of the cult movie, a production of Rocky must pass some serious tests: is it trashy enough? Daring enough? Will it move you when the time comes?

Yes on all counts at Cygnet. Plus, many voices are stronger than the original. Bets Malone leads off with a sultry “Science Fiction/Double Feature.” Brad (Jacob Caltrider) and Janet (Amy Perkins) follow with “Damn It, Janet.” They, Murray, and the rest of the cast don’t just sing the songs, they add licks and high-wire grace notes. As does Patrick Marion’s seven-piece band. Along with a sassy feel, the nuances suggest ownership of the material.

Murray, who also directed, is the star. He does full justice to Frank N Furter’s commanding presence, fluid gender flexibility, and, especially, to Frank’s trio of concluding numbers: “Don’t Dream It,” “Wild and Untamed Thing,” and “I’m Going Home.”

But this is truly an ensemble show with no weak links. David Brannen’s first-rate choreography builds on, even fills out, the original. Jennifer Brawn Gittings’s 1950s costumes hearken back to the era of Tail-Gunner Joe (aka Rocky Horror’s alter-ego). Chris Rynne’s lighting shifts from strings of Mardi Gras beads to bolts of lightning in a heartbeat. And Chris Luessmann’s sounds and soundscape add polished clarity to the madness.

Jim Chovick plays a gruff — and quite funny — criminologist. One of his duties: lay down some rules. Which is odd, since Rocky Horror is about banging out the sides of traditional boxes. As at the Strand, the audience can participate. But, Chovick adds, within reason’s ballpark.

So the audience can stand, shout, and even swear, but can’t “be an ahole like Brad by blocking anyone’s view with a huge hat.”

To encourage participation, Cygnet sells kits for the show, but cautions buyers: “Please see a doctor if your props last longer than four hours.”