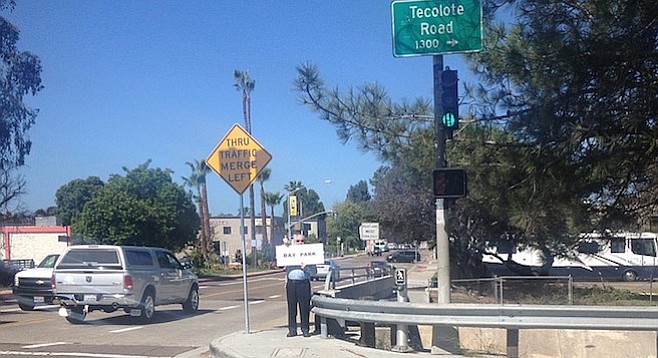 "In October 2014, I started to talk to some select groups to see if there was any interest,” said Potter of his quest for signage. “In June 2015, I circulated a petition that got a lot of signatures. At this point, I felt comfortable presenting the idea to the Clairemont planning group."

The planning group voted unanimously in favor of the signs in July 2015. The city was equally unified in their opposition. In October 2015, a letter to the planning group from the city stated that Bay Park was not considered a community, but rather only a neighborhood.

But to Potter, this wasn't just about the signs.

"The signs are just part of the story to acknowledge and celebrate Bay Park and its long history. Bay Park was around long before there was any movement in Clairemont. Bay Park has history going back to 1877. Clairemont wasn't developed until the 1950s. Ocean Beach lives next door to the much larger Point Loma community yet retains its own community status; Bay Park just wants that same recognition."

Potter, an urban planner for more than 40 years — and about half of that time spent in government — said he wasn't too surprised at how slow things were moving.

Potter says the signs won't be custom like the one in Ocean Beach.

Anthony Santacroce, from the city, commented on the glitches in getting the signs approved. Santacroce said on March 17, "The request was handled by the traffic engineering division. Their concern was that the type of sign requested was thought to be non-standard. Bay Park is a neighborhood and was thought to be initially asking for community signs. When it was communicated that standard neighborhood signs were requested, then they were approved." Santacroce confirmed that the signs are on schedule to be installed by June.

Bay Park resident Peg Lieb said on March 16, "I'm happy that our community will finally get recognition for being one of the oldest communities in San Diego. I'm slightly disappointed that the signs will be so bland. The distinctive part of Bay Park is that it looks over the bay and it's a hilly community so that on most of the streets you can see the bay and its sunsets."

Potter has more signs he wants to install in Bay Park. Two more neighborhood signs (Clairemont Drive, Balboa Avenue) and historic Highway 101 signs in the center of Bay Park and the Morena area.