Your guide to movie theater parking 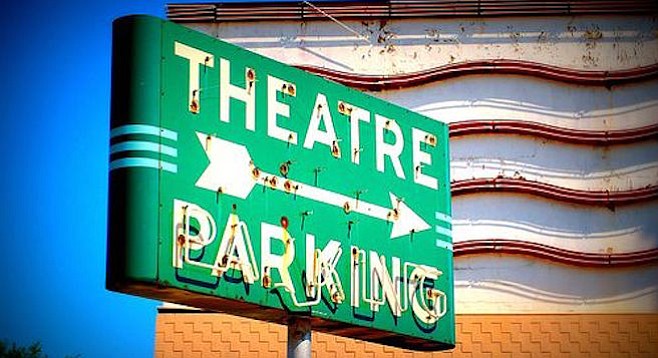 The impetus for this public service announcement began two weeks ago when I was trying to attend a 10:30 a.m. screening at Arclight La Jolla. A mall without a multiplex is as useless as a restaurant that shows movies. Until UTC decided to add a cinema to their already overbuilt shopping facility, there was no pressing need to familiarize myself with the lay of this plot of Westfield earth.

Being the only one in the county not hip to the fact that their parking lot had recently been reduced to rubble to make way for a new outdoor structure, I arrived at 10:10, thinking there’d be ample time to grab a Starbucks en route to the screening. At 10:35 — after parking close to Sears and huffing and puffing my way toward the theater — I found myself standing before a locked gate with a sign in place that read, “This Gate Must Remain Unlocked at All Times.”

Securing a spot at UTC has always been a bear, but until the time comes when the cyclone fences are down and the gravel is smoothly tarred over, when visiting Arclight it’s best that you park at AMC La Jolla and walk.

What follows is a list of prime parking real estate at the dozen cinemas that I frequent most. Know of any sneak spots at other theaters? Your cartographic comments are welcome.

Try Parking Structure B just south of the theater. If it’s not too sunny, park on the roof. In the event of a scorcher, try one floor below and hop the stairs.

Follow the Nobel Drive exit and take your first left (between Islands and California Pizza Kitchen) into the La Jolla Village Square. Do not waste your time looking for an outdoor space, particularly anywhere near the Ralph’s. Turn right into the underground facility and park near the Best Buy.

Enter the parking lot from Camino Del Rio North and veer to the left. If no one’s looking, ignore the sign, hang a U-turn just before entering the underground structure, and turn right. If you’re not the thrill-seeking type, enter the garage legally and turn left. All roads lead to Aisle Y. Look for the metal stairway at the end of the row and park as close to it as possible. When the movie lets out, use the exit door closest to theater 19. If everything goes as planned, your car awaits at the foot of the stairs.

Take the Carmel Mountain road exit off the 15. Hang a left at the second stoplight (Rancho Carmel Drive). Proceed to the second entrance on your right. Once inside Carmel Mountain Plaza, turn left and park next to the theater. When the movie’s over, exit through the side door.

Avoid the Mira Mesa exit off the 15 at all costs; one can finish Moby Dick in the time it takes to make a left turn into the mall. Use Carroll Canyon as a substitute. Follow it to Black Mountain Road and turn right. Proceed to Hillery Drive and turn right. You’ll pass the Home Depot and turn left onto Westview Parkway. Just past the Legacy Apartment Homes and before the Old Navy, you’ll find an entrance on your right. Follow it and park in back on the side of the theater.

Enter the parking facility on the Fifth Avenue side. After the machine spits out a ticket, you’ll come to a dead end. Unlike the rest of the lost lambs, you’ll want to make a left to find parking.

Street parking. You’re on your own.

You’re going to have to work a little harder to gain access to the county’s largest screens, but it’s worth it.

Take Clairemont Mesa Boulevard to Clairemont Drive and head north. Turn right on Lakehurst Avenue followed by another quick right and look for a space. The entrance to the mall is located at the south end of the lot.

Access the Garage of Fruits and Vegetables on the Fourth Street side and veer to the left. Follow the coiling path to Red Onion, Level 6, and pull up a stall.

Take the Friar’s Road East exit off the 163 to Frazee and turn right. Turn right just past B.J.’s and park by the Starbucks. In the event of a Chargers game, stay home and watch it on the radio.

I cannot speak to the accessability of many of these venues, but your UTC Arclight experience rang a bell of sympathy. There's a ton of construction going on up there and it's a miracle anyone goes to this theater at all right now. I am told the next phase includes the demolition and rebuilding of Nordstrom on the east side of the complex.

At present, I turn south on Genesee from La Jolla Village Drive, make a left at the light at Nobel and left again into the boulevarded entry to the south side of UTC where Macy's and Red Robin Restaurant are located. Head north to where Macy's adjoins the massive dig and park at the edge of nomansland. Enter Macy's doorway, go through menswear and look for daylight of an inner mall door, past the Mac cosmetics counter to the outdoor playground, past the pool with fish statues. Hang a left at the first intersection where directional signs point to the Arclight. Its escalator is on the right, just past an Italian caffe and gelato shop.

Stop the music! Wasn't it a minor parking inconvenience that caused you to eschew the Gaslamp? Were I to follow your directions, a trail of breadcrumbs would be needed to find my way back to the car. ;)

Scott, I've had much better luck at the Landmark in Hillcrest by entering off of the University Ave. exit from 163 South. If one's travels takes them that way, this entrance puts you right in the middle of the garage and usually close to a few empty slots. Also, don't forget that nice little parking lot two doors west of the Ken. If you get there 15 or 20 minutes early there are always plenty of empty spots. Lastly, don't forget there's lots of parking in the underground garage at the Ultrastar Hazard Center. You access that by taking Frazee to the end and taking a right on Hazard Center Dr.. Several entrances to the garage are on the right. Thanks for all the info. There's nothing worse than being late to the movie because you couldn't find a damn place to park!

You'll find me using the lower garage entrance across from the trolley stop at Hazard tonight and any other night I venture that way...