Located on two-thirds of an acre off Avenida de Portugal 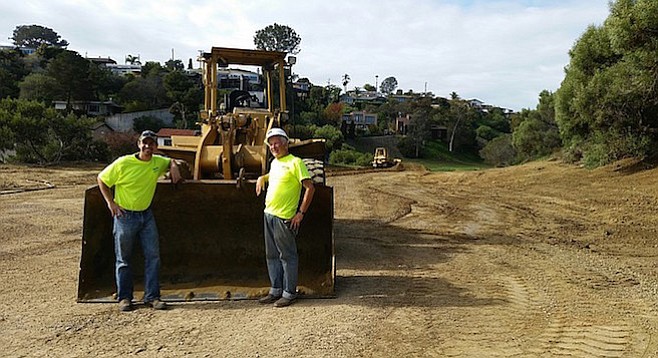 The new pocket park will be located on a two-thirds of an acre lot on Avenida de Portugal above Cañon Street. It will be the first park for Roseville, the oldest neighborhood in Point Loma. Funds from the 2012 sale of the Barnard Elementary school lot in the Midway District brought the $840,000 needed to develop the park. The annual maintenance of $11,000 is earmarked as well.

Jon Linney and Don Sevrens met in 2014 when they both ran for the Peninsula Community Planning Board. It wasn't long after they joined the board that they were knocking on doors to garner community support for a new neighborhood park.

Sevrens is a veteran local journalist and Linney is a college student with political aspirations. They both talked to me on March 9 about their 20-month journey to the March 8 council vote.

"The biggest struggle was getting support from the community as well as funding," said Linney. "The original budget was $300,000. We went to five different civic groups. They were all behind the park but wanted it to happen first before donating."

Sevrens said that the first “yes” they got was from Carl Silva of the United Portuguese SES; Silva grew up next door to the land and remembers playing there as a child.

The ball got rolling in July 2014. Burtech Pipeline Company did a pro bono $30,000 cleanup, taking away 12 dump trucks filled with debris.

Sevrens and Linney remember people honking and giving the thumbs up as they drove by the cleanup.

Sevrens reminisced about a lady and her three-year-old son who wanted to be part of the cleanup. It wasn't safe with all the machinery moving about so a separate area was found where the boy could safely pick up trash.

Linney and Sevrens say they had a long meeting with the Park and Recreation Department in August 2015. The duo left thinking they would have to fully fund the park through private donations. They finally found what they were looking for in the 1987 community plan that had the site listed as eligible for public funding through development-impact fees. It was at this point that city councilwoman Lorie Zapf got city department heads together to find the money while Linney and Sevrens led the community effort.

One of the most unique features of the park will be the proposed demonstration garden with colorful drought-resistant plants instead of grass. Sevrens says he’ll be in contact with the San Diego County Water Authority for help.

"We want to give ideas to residents of what can go into their yards instead of grass,” says Sevrens. “Expertise is what we need more than money. We envision online support where someone can see a species marker and then go to a [water authority’s] web page or a participating local nursery's website to learn more."

Even though "Canon Street Park" is the given name in city documents, the community would like a name that tells of the neighborhood’s Portuguese history. Sevrens mentioned the efforts of Portuguese fishermen during World War II.

"Tuna boats were used as an early warning system during the war. Fishermen pretended to be fishing while actually serving as a lookout for the enemy."

Community workshops are expected later in the year, with a bid expected to go out before the end of 2016. The project has a completion date of 2018/2019. An additional $100,000 still needs to be raised for extra elements that will reflect the cultural history of the neighborhood, such as statues of women and children waiting for the fleet and historical placards.