San Diego, I Love You (I Love You Not) as a Choose Your Own Adventure agency 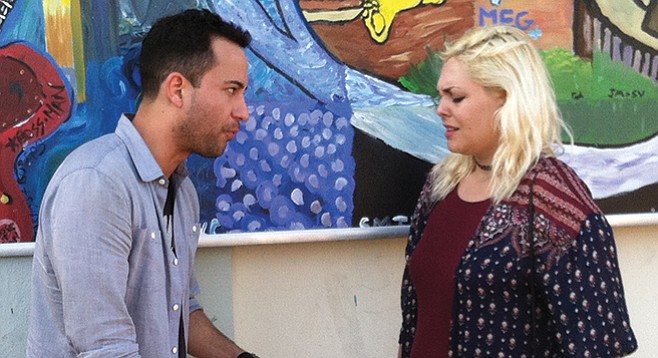 I loved Choose Your Own Adventure books as a preteen, probably because every classroom in school had a near-complete set on the shelves. That, and we didn’t have iPhones to stare at. The best part of any Choose Your Own Adventure was the endless array of inventive means by which the hero “you” could get “yourself” killed on the page. Whether shredded and devoured by prehistoric sawfish, disintegrated by alien technology, or trapped forever in the body of a pig destined for slaughter, more often than not, you ended up dead.

We can’t induce fatal storylines onto the actors from Circle Circle Dot Dot’s San Diego, I Love You (I Love You Not) — which incorporates a limited form of Choose Your Own Adventure agency, in that we can elect which of two characters we follow on a real-life narrative tour through Ocean Beach, and we have a say in their ultimate destiny as a couple — but it is possible to bring the show to a dead stop during the scene at Jungle Java by queueing up to order elaborate frozen coffee drinks while the actors wait patiently at the back of the cafe.

Perhaps we, as audience members, are too quick to snatch at the chance for narrative freedom. Give us an inch, we’ll take a mile.

Or maybe the idea of being anywhere on time is a great cosmic joke. Woody Allen supposedly said that you could make God laugh by telling him your plans. In that light, gumming up the works and getting lost along the way would be the ultimate in keeping with The Order of Things. After all, “This is real life. Sometimes things happen....like planes flying overhead,” declared SDILY(ILYN) playwright Katherine Harroff, as a timely jet skorched the OB skies in an attempt to drown out her introduction to one performance. The only guarantee is that it would be a unique performance, in at least some small way, as real life intrudes and is intruded upon.