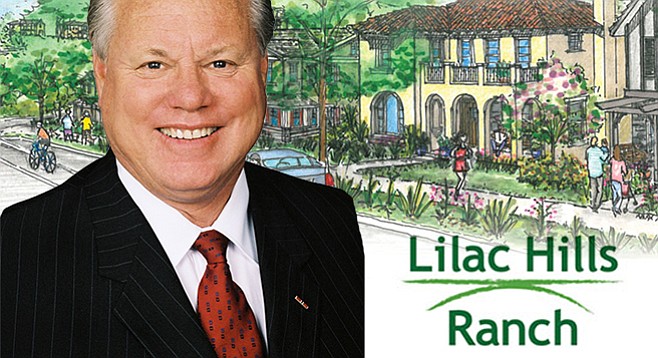 Fallbrook real estate broker Paul Schumann has taken the helm of a new political committee established to run an initiative campaign on behalf of Lilac Hills Ranch. The controversial North County housing and commercial development is struggling to overcome a gauntlet of regulatory setbacks, including the forced recusal of Republican county supervisor Bill Horn, who owns land nearby.

Called “San Diegans for Housing and Jobs, a coalition of local businesses, community leaders, and sustainable energy and housing advocates,” the group, registered February 24, is funded by the Lilac Hills Ranch Investment Co., LLC, according to a disclosure filing. Says a résumé on Schumann’s LinkedIn page, “One of the things I do best is ELIMINATE problems. I am a licensed real estate broker and insurance agent in California. Through EquityKey, I also provide cash now for qualified homeowners, without a new loan or payments.”

Meanwhile, ex–city councilman and onetime community-newspaper owner Jim Madaffer is running a new political committee called Citizens for a Better San Diego, with treasurer April Boling, according to a February 25 disclosure. In April 2010, Boling drew a warning from the state’s Fair Political Practices commission regarding a committee that failed to accurately identify spending on behalf of Tony Krvaric’s bid for a spot on the Republican Central Committee. The name of that group was Citizens for a Better San Diego County.

LMAO. “San Diegans for Housing and Jobs, a coalition of local businesses, community leaders, and sustainable energy and housing advocates,” Sounds like it would be a good thing but it is nothing but a bunch of developers who want to build houses that will be anything but affordable. The jobs are construction jobs temporary so there will be little permanent job growth. The jobs that will increase are low wage retail jobs and none of them will be buying any houses.

It's "income-based" housing. But that income must be high!