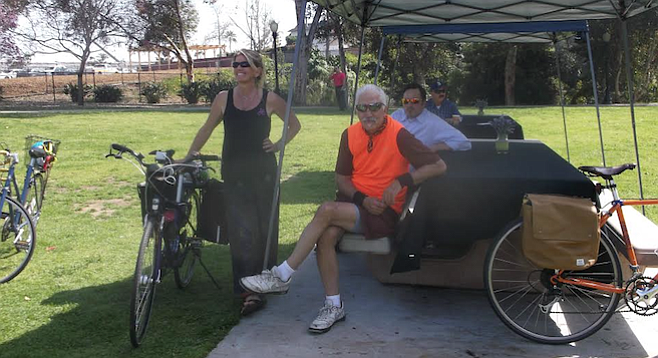 Construction began Tuesday (March 1) on a bikeway to run from Adams Avenue to Camino del Rio South next to the I-15, and a phalanx of wonks, elected and agency officials, planners, supporters, and neighborhood residents assembled to acknowledge the occasion at Ward Canyon Park. 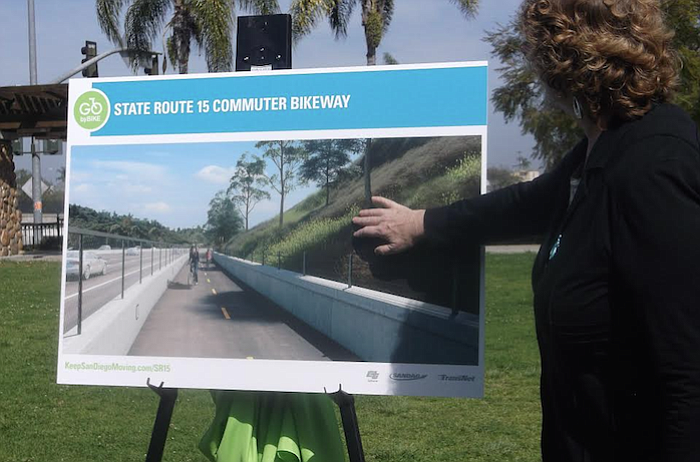 The paved one-mile bikeway will be 12 feet wide with a concrete barrier on the east side to wall off freeway traffic. It will be striped down the middle for two-way traffic. Final cost is expected to run to $14 million, according to San Diego Association of Governments officials.

"Anyone who's ever ridden Bachman [Drive, behind UCSD hospital] or Texas Street is going to appreciate having a safe and convenient way to connect to the shops, restaurants, and amenities of Mission Valley," said city councilman Todd Gloria. (Note: The bikeway project won't cross I-8.)

The remaining option, Fairmount Avenue, isn't any safer, said Leo, a 19-year-old skateboarder who came to see what the crowd was about and stayed for the fruit and cookies served after the speeches. Leo said he sometimes walks a primitive path along the I-15 to Mission Valley ("I didn't hear that," a Caltrans official said), but mostly he waits for rides from friends to get up and down the hill.

"I don't have a bike," he said, tapping his well-worn skateboard. "This is how I get around.”

Though it was a wonk party, the project itself is important to Maria Cortez, who lives in City Heights and said she has been pushing for better transportation connections since 1985.

"It gives us many more opportunities for work, for shopping, and for fun," Cortez said. "Because we can now travel into Mission Valley without dealing with traffic. It makes it easier for residents, it's healthier and cheaper, and, once the Centerline [express bus service] starts running, it will be reliable."

The mile-long bikeway has been planned for nearly five years, with cooperation from the city, the California Department of Transportation, and the San Diego Association of Governments.

The second phase, a 1.2-mile bikeway from Adams Avenue south to Landis, along Terrace and Central avenues, will connect Mid-City and City Heights. It's in the design phase, with construction targeted for later next year. The project runs alongside the I-15 where Caltrans and the Metropolitan Transit System are building the Centerline bus route, which may help people when it comes to riding back up that big hill.

Planners promised City Heights the connection from Mission Valley to downtown in 1985, when they gouged the neighborhood to build the I-15. The bikeway planners couldn't do anything about the steep grade from Adams to Mission Valley, according to city councilwoman Marti Emerald.

"You'll be able to bicycle down and ride the bus back up," Emerald said. "That's what I would do."

Too bad they couldn't make it a zig-zag pathway so one could ride up the hill without getting a heart attack. With a straight path, there definitely needs to be a bus going up (a tram would be even better). As for going down, you best have some really good brakes on that bike.

$14 for one mile? Are they paving it with marble?

Hindsight can often be expensive...

I lived for a time, about forty years ago, in Mission Valley, and tried to get around by bike. Some routes worked well, but many did not, and the idea of trying to climb out of the valley either to the south or north was daunting. Not the least reason was the lack of bike lanes on streets that were too busy with cars and trucks, even back then.

This is, I suppose, better than nothing. But I would not care for a bike lane that is right next to the freeway lanes. Scary, noisy, and breathing exhaust, all describe the experience. If I were still a bike user, my reaction to this would be "No Thanks."

Traveling around San Diego on a difficult at best and impossible at worst. San Diego is a maze of streets intersected by canyons making traveling in a car problematic. San Diego was built around the automobile and not around mass transit. The trolley is great for a few but does not serve the masses. The bus system is a joke. Few places of employment are convenient to transit systems.

You’re invited to a community open house for the Landis Bikeway project,

hosted by the San Diego Association of Governments (SANDAG). Stop by any time tomorrow evening during the two hour time frame to learn about project details, ask questions, and provide input on this important regional bikeway connection.

The Landis Bikeway is one of six segments planned as part of the North Park | Mid-City Bikeways project, which will add approximately 13 miles of bike boulevards and protected bikeways and connect the North Park and Mid-City neighborhoods. Proposed project features in this segment may include new and raised crosswalks, mini-roundabouts, buffered bike lanes, neighborhood traffic circles and reverse angle parking to maximize benefits and safety for everyone using the streets.