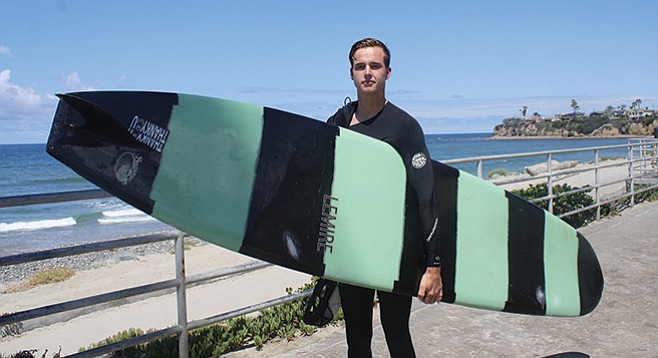 Josh Turner’s introduction to surfing came by way of a Surfari Surf School class in Mission Beach when he was 13 years old.

“I was hooked,” Josh explains. The only issue was that he lived in Temecula Valley. “I live in PB now. I surf about 4 to 5 times a week.

“I experience the same amount of jerks out there now than I did when I wasn’t as good, but I stayed away from the territorial spots.

“My first experience at Hospitals was crazy. It’s a reef break. It breaks really aggressively and it’s not forgiving. The learning curve is a little more painful. Some of the biggest waves I have surfed have been at Hospitals. I have come close to drowning, got almost a two-wave hold down on a large day, probably almost 12 feet....

“I probably have about 13 boards. My favorite board right now is my 9´11˝ single-fin log, Greg Lamar shape. I got this one on Craigslist for only $350.”

Craziest surf experience: “I saw this huge seal and he caught a fish at least a foot and a half long. He was just tearing it apart. There were birds dive-bombing him.”