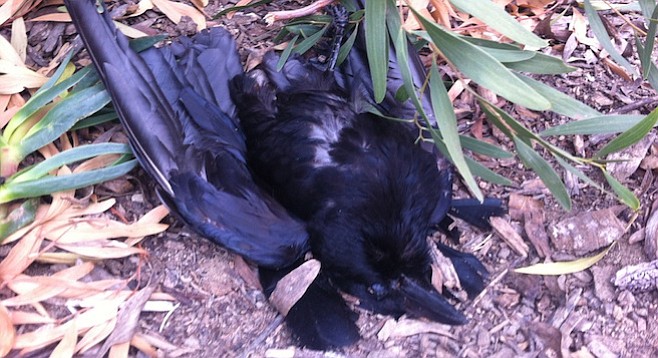 Dead crows are being found in Cardiff by the Sea and Encinitas. Over the past two weeks, neighbors and friends in the Poinsettia Heights and Park Place neighborhoods have found at least seven dead and dying crows.

“Crows don’t just die on people’s front lawns or the sidewalk,” said my wife Cheryl, who found a dying crow in our dog park. A visitor from the Phoenix area, Kayla Craig, said she saw a dead crow on June 23 on a sidewalk in downtown Encinitas at the corner of Third and G Streets.

“Summer of 2015 was a bad year for West Nile,” said Conlan, indicating the department wasn’t sure about the virus this year,until active samples started showing up between Del Mar and La Jolla around the Los Peñasquitos Lagoon. Vector Control truck-sprayed the area about a month ago.

“Those crows are now obviously part of a larger zone that’s extended up from the lagoon,” said Conlan. Due to the disease being contracted through mosquito bites, he suggested people wear plenty of repellant in these affected areas where the crows are being found.

Vector Control needs to monitor the West Nile situation and requests that anyone finding a recently dead bird contact Conlan’s office for a pick up of the bird, preferably by email.

“The bird has to be fresh, within 24 hours, not stiff, and not smashed road-kill,” said Conlan. “And only the species most affected by West Nile: crows, ravens, jays, and birds of prey, like hawks, owls, or falcons.”

Sorry to hear that. However, what is San Diego County and City doing to control the Crow populations?! In some neighborhoods, aggressive crow populations have taken over and are pushing out many other species of birds. They are multiplying, very aggressive, very noisy and basically out of control in some county neighborhoods.

What do we do to control the Crow populations to give other species of birds and animals a chance to grow and thrive?!

I have contacted the City and County and I have never been given any kind of response and/or plan to control the excessive crow populations...

If anyone has ideas or information, then please share with me and others..