DJ musical chairs or is FM 94/9 not "about the music" anymore? 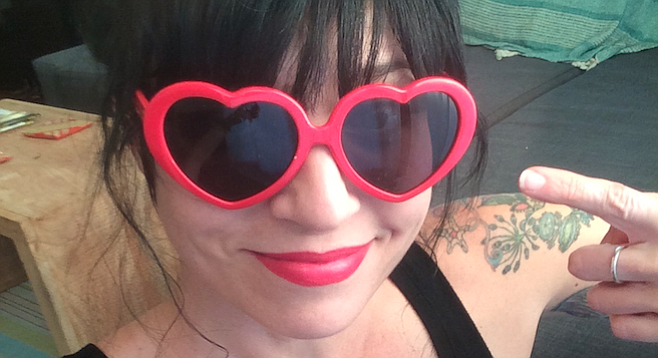 Is it a case of DJ musical chairs or a key player jumping off of a sinking ship?

Hilary Chambers, who just uses her first name on the air, started as a local alt-rock DJ on 91X but spent the past eight years at FM 94/9. She has decided to walk away and return to 91X, a station she first joined 20 years ago.

Insiders say her contract was up and the renewal offered to her by Entercom Communications, the owner of FM 94/9, was both shorter in time and lighter in pay.

“To me it shows they don’t intend to stay in music that much longer,” said one insider with knowledge of the contract. “They simply aren’t prepared to make commitments to key players. That speaks volumes.”

Hilary would not comment on whether she thought that FM 94/9 would be switching to an all-sports format once it becomes the flagship station for the Padres in March.

The Padres announced three months ago that they were moving their play-by-play broadcasts from AM station Mighty 1090 to FM 94/9 after the end of this season.

Radio insiders say the slow-moving pace of live baseball broadcasts simply does not fit with alternative rock, and that a Padres/modern-rock mix on FM 94/9 would drive many local modern-rock fans over to 91X for good.

Some FM 94/9 employees have pointed out, however, that Entercom, which also owns FM 94/9, KSON, and Sunny 98.1, is actively trying to buy another local FM station (say, Energy 103.7 FM, for instance, which is currently owned by CBS Radio). Should that happen, they say that station would likely take on the Padres and an all-sports format, leaving FM 94/9 to stay in modern rock.

Should that not happen and the Padres end up at FM 94/9, as has been announced, it is expected that FM 94/9 would drop music and go all-sports.

Unlike most other cities, San Diego has never had an all-sports FM station.

Hilary’s 20 years in radio in the same market is unusual in an industry known for high turnover. Remarkably, she replaces Robin Roth, who has been on the local airwaves even longer — 30 years. Roth and Mike Halloran both started on 91X on the same day in 1986. Halloran arrived from Detroit where he spun punk and new wave records, and Roth had been a DJ at local clubs and at UCSD’s FM college station KSDT.

Likewise, Hilary started her radio career at a UC station, KUCI in Irvine. After part-time work at the long-shuttered all-metal KNAC in Long Beach, she worked in Denver before arriving at 91X in 1996.

FM 94/9 has not named an on-air replacement for Hilary. Currently the station’s website simply lists “FM 94/9 Middays” where Hilary’s name and face used to be.

Radio has become too corporate, too much of the same stuff on every station etc. KRPI tried to do some decent stuff, local music and bands, up and coming bands that had not totally sold out etc concerts, local DJ's, live music etc. Too bad that KPRI could not make it in this market anymore.

Find me a Station that is doing what KPRI tried to do and I will definitely save you a button and give you a regular listen!!! (There are probably many other former KPRI listeners looking for a new station)..