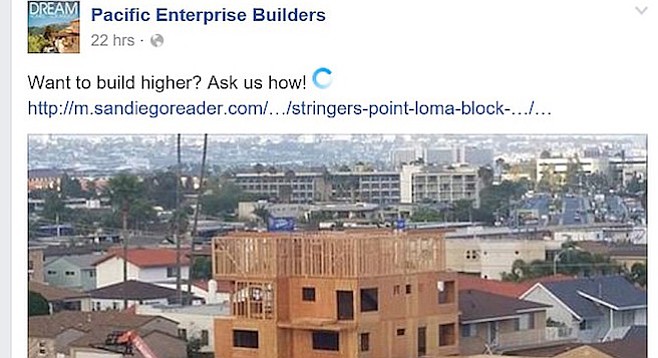 Madison Bartz lives on Emerson Street next to where two extremely tall duplexes are being constructed in the Roseville neighborhood of Point Loma. On June 21, she recorded video of construction workers as she talked about the noise, the mess, a plank that barely missed hitting her window, and pointed out that they had started work before 7:00 a.m., a violation of municipal code.

“All of the sun is completely blocked from our house now,“ said Bartz. One ray of sunshine in this bleak situation is the army of locals willing to step up. While Bartz and others prepared for a protest on June 25, the construction continued: floor two (of four) was added to the second duplex on June 22. 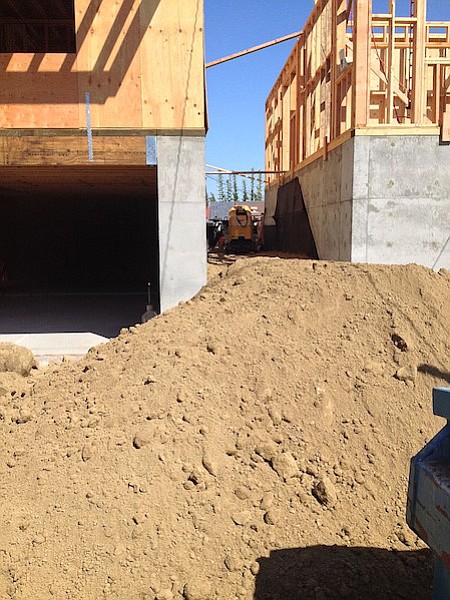 It appears dirt was brought in order to fill to a level that the buildings' heights can be measured.

Pacific Enterprise Builders also seemingly began importing dirt to create a higher ground zero, ostensibly in order to be in compliance with the coastal zone's 30-foot height limit (some estimate the first duplex's height at 40 feet).

Jon Linney, chair of the Peninsula Community Planning Board, met with San Diego City Council member Lorie Zapf to talk about the situation on June 22.

“Enough meeting behind closed doors — developers need to include the planning board and the community in the decision-making process,” said Linney. “At the end of the day, the developer knows they're at fault. There’s a loophole and the contractor took advantage of it.”

Don Sevrens of the planning board produced a letter sent to Mayor Faulconer and (cc'ed to) Zapf in 2014. The letter protests the reinterpretation of building heights under the Coastal Height Limit Overlay Zone (Prop D). It also points to municipal code violations when not measuring from the lower of existing or proposed grades. The letter also asked the mayor to explain when changes had been made and why they were made without going through the board. The letter went unanswered, said Sevrens. 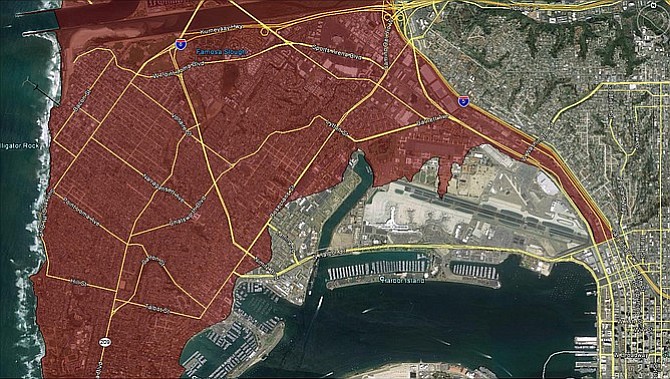 To get some clarification on what this all means in relation to the duplexes, I talked to David Dick, a Point Loma land-use attorney.

“The Prop D height restriction trumps all other zoning and it couldn’t be any clearer that this project violates it,” said Dick. “It’s not just a violation of intent and integrity. It’s simply a violation of the law and shouldn’t be allowed to stand.

"The city appears to be totally asleep at the switch. This historic community is being bulldozed and replaced with the very sort of development the citizens of San Diego voted over 45 years ago to prohibit. Someone needs to shake the city bureaucrats from their slumber and make them enforce the law.”

On June 23, Pacific Enterprise Builders posted the previous Reader article about the duplexes on their Facebook page — touting their ability to build higher. When I called the company, an employee said, “I’ve been barraged by you guys, just leave us alone and let us do our job!” Shortly after our conversation, the post was deleted...but not before Zapf and others in the city got wind of it.

Babita Souza said of Zapf’s press conference on June 24, “She said she’s ready to fight and that the post on the contractor’s home page has everyone furious at the city.”

Souza asked me to check out three nearby construction sites in case they also had in mind skirting the 30-foor limit. Two of the sites have applied to build three-story duplexes (Garrison/Evergreen streets) and three-story apartments (Jarvis Street, between Rosecrans and Locust). The lot on Garrison and Locust, however, has a permit application to build two four-story condos.

I talked to the architect for this latter project. Michael Morton said that the permit application is wrong and that the plan is to build three-story townhouses with a subterranean garage.

When asked if he had any plans to bring the project to the community or local planning board, he said, “No. It’s not in the coastal zone.” However, the project is the next block over from Emerson/Evergreen and appears to be within the coastal overlay map.

I again contacted the city to ask them how projects like this are allowed to bypass community involvement and why the developer is seemingly getting a pass. Like that 2014 letter, all questions went unanswered.

I asked Peninsula Community Planning Board chair JonLinney what he thinks is the incentive to approve projects like this. He said, “I think $50,000 checks that grease political palms is the real issue.”

Linney is right about campaign contributions buying blind eyes at City Hall. But with $50K checks? Hell, San Diego pols will sell you out for a tenth to a third of that! Look over the political contributions from developers, http://nf4.netfile.com/pub2/Default.aspx?aid=CSD. Deals worth millions that deprive the public of land and land rights often go for only a few $1-5K donations.

If all you have is Lorie Zapf, you are doomed. Past performance predicts future performance. She's clearly on developers side.

Speaking of performance, observe Ms. Zaph at work during a City Council meeting. It's somewhere between disgusting and infuriating. She clearly doesn't give a rats azz or care about the average citizen needs or concerns.

David Dick: Thank you for the clarification. It's always been from the highest existing grade on the sidewalk serving the parcel.

I built a house on Alexandrai St. In Point Loma in 1993. A neighbor complained about the height. The city required I hire a licensed City approved Suveyor, which showed I was 5' below the approved height requirement measured from the highest point on the adjacent city sidewalk.

I just finished a remodel on my family home (purchased 1951) in the Overlook neighborhood above Bay Park. This project also had a height requirement exactly the same as my 1993 project. However this time the point of reference was from the highest EXISTING grade next to the building pad.

Everyone clear on this? I'm not.

I am clear on one thing, Lorie Zaph is completely influenced by her developer crony campaign contributors. Shameful.

Money talks and citizens walk. San Diego politicians have always been bought and paid for by the developers.