Behind the Border Fire fire wall

"We know that quite a lot of animals were left behind." 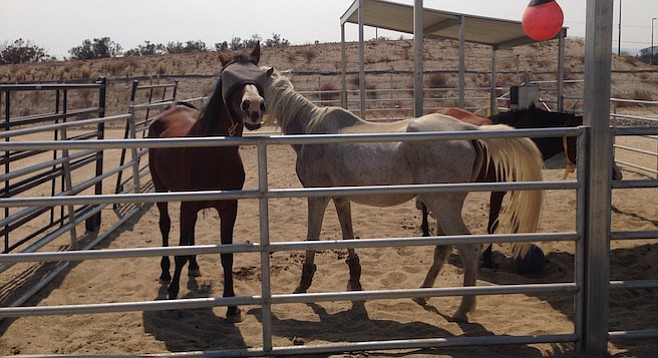 Behind the lines at the Border Fire, neighbors, volunteers, county animal-control crews, and Border Patrol agents are caring for the animals left behind during the fire's sudden spread. (Border Fire updates.)

While many people evacuated the rural areas overtaken by the fire, which grew from 20 acres to 6500 acres on June 20 in a matter of hours, some people and many more animals were left behind the lines.

"We have our people out at the fire, and we have dozens of Border Patrol agents out there picking up animals and providing food and water for the animals left behind," said Lt. Dan DeSousa of San Diego County Animal Control. "We need people to let us know where their animals are so we can find them and do our best to take care of them." 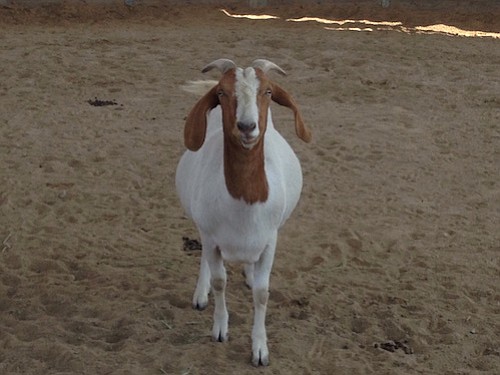 With the Circle T Ranch in Descanso filled to capacity with evacuated animals Tuesday night (June 21), the Boulevard Border Patrol Station set up to shelter large animals, he said.

"We hauled a truckload of temporary corral panels out to them, and so far they've got ten horses, a couple of goats, and a donkey," DeSousa said. "They've been picking up animals and bringing them in or leaving them in place with food and water."

Border Patrol agent Wendi Lee confirmed that "a small army" of agents (including volunteers from stations not in the fire zone as well as the sector's search and rescue team) is helping residents and animals behind the lines.

"We have access to roads the public doesn't and have ATVs and trucks that can go in. Our agents know the back roads and the area better than anyone," Lee said. "It's our community and we are happy to help out."

Agents are doing welfare checks on people and on animals, she said. Because some of the agents are also certified paramedics, they can hand out medication to people who've stayed behind, something that regular volunteers wouldn't be allowed to do. The Border Patrol also sent its two in-house equine experts out to offer the same assistance and assessments to horses that have been left behind, she said.

"We are feeding and providing water for animals, transporting animals to safe locations when it can be done, tending to the medical needs of animals and people who didn't evacuate," Lee said.

Volunteers, including Dennea Freeman and sisters Stacy Russell and Shontel Grivna, are frantically gathering food and supplies for both people and animals and taking them out to the Jamul Feed Store, where Border Patrol agents pick up the supplies and take them behind the fire wall.

Many of the volunteers are ranchers with their own horses and pets and live in other parts of the county that burn periodically.

"We're working with people who stayed behind, like Iris [Gardner] in Potrero," Freeman said. "We know that quite a lot of animals were left behind from the people we've been in touch with."

Iris Gardner, who runs Primeval Gardens, has been posting updates a few times a day. Around 9 a.m. Wednesday, she posted that "Everything is fine, I'm spending most of my time hauling water and food to neighborhood animals whose owners evacuated. Still finding animals with no food and water. I put out the word last night that I needed more animal feed and some wonderful people rallied together and managed to get a load in. We have feed now for pigs, chickens, cats, dogs, poultry, rabbits etc. I'm getting ready to start taking more out this morning to hungry animals. There's a residence down the road from us that burned, left eight large dogs, one died. They are being fed and watered until we can locate the owner."

DeSousa said that the 2007 wildfires taught animal control to begin to search for and take care of animals behind fire lines as soon as possible.

"Before that, fires ended quickly and people could get in," he said. "Now, if the property is secure, we leave them in place. We learned that in the 2007 fires — we never encountered that before."