Are you theater people? 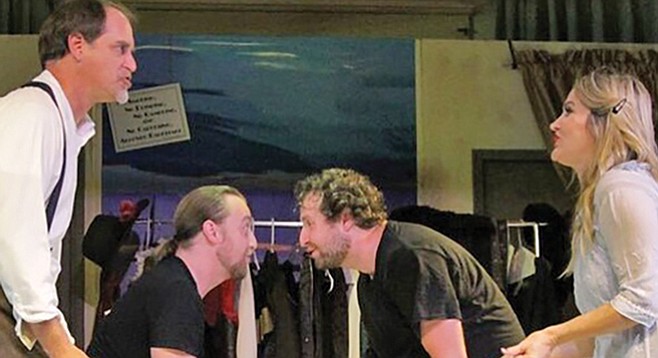 A rich and tricky question. Ask it of yourselves before and after attending Matt Thompson’s The Complete History of Theatre (Abridged) at the Point Loma Playhouse. As the play’s second act finally delivers the titular rundown, it’s borderline impossible not to find yourself somewhere between the occasional laugh and absolute hysterics. Based on how many of the lightning-quick theater parodies appeal to your personal brand of humor, it’s easy to tell where you fall along the “theater people” spectrum.

Zero to four percent chuckles. Your involvement with the contemporary stage begins and ends with saying you “heard Hamilton was really good.” You don’t hate theater because a certain degree of familiarity — just enough to lend verisimilitude to otherwise sweeping inference and generalization — is necessary to sustain true hatred. Rather, you are indifferent to the theater. Broadway is a street in San Diego with too many homeless, and in high school you probably teased the theater kids, but only halfheartedly.

Five to sixty percent laughs. As a child, you and your cousins staged home renditions of Cats every weekend so that your parents didn’t make you play outside. You cried yourself to sleep for weeks when the lead in your high school’s production of Titus Andronicus went to somebody else. You invariably speak the words “the theater” with a heavy Thurston Howell accent, and not a trace of irony. Star Trek is a thing to which Patrick Stewart condescended, and you can sit through Kenneth Branagh’s Hamlet without a pee break.

More than 60 percent sidesplitting hysteria. In college, you only minored in drama for the sake of practicality, and because your overbearing father would have been disappointed if you’d chased that particular dream too fiercely. Now, you hold season tickets to every major theater in San Diego, and you at least subscribe to the email lists of the more underground companies. You like musicals alright, but your Modernist heart will always know that the theater is the beginning and end of art. (You might even capitalize the a if you get too carried away.) Clever Gertrude Stein references score points with your friends.

If none of these apply to you, you are possibly a humorless android, and you have bigger problems.

The History of Theatre (Abridged)

The Complete History of Theatre (Abridged) runs through June 26.