Relax in this small preserve with great wooded areas and wetlands 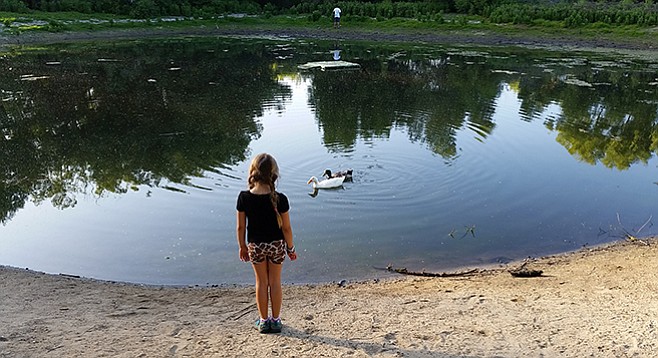 This 46-acre nature preserve was an orchard and farmland before it was acquired by the Fallbrook Land Conservancy (FLC) as their first acquisition. There is still some farm equipment and waterworks visible. For its small size, it has a lot of diversity — from wetlands to open fields, mature forest groves, and a pond. The FLC has been planting native San Diego County plants, including oaks, sycamores, and cottonwoods, and fixing up trails and birdhouses, giving this small retreat in the midst of suburban Fallbrook a pleasant garden-like quality. The primary trails are very accessible and popular with joggers and birdwatchers.

The preserve is home to hundreds of mammal, bird, and reptile species that are regularly monitored. By far the greatest number of species recorded are birds, with over 122 species observed in the preserve. Perhaps this is why the preserve is named Los Jilgueros — Spanish for “the finches.” 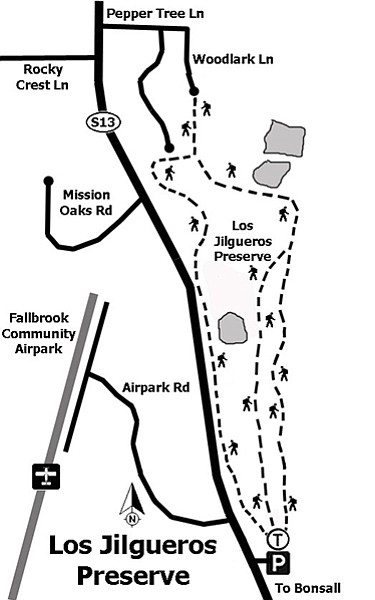 From the south parking area, the trail heads west in the direction of the highway following a boardwalk into a pleasant wetland area. The nature trail parallels the highway through a wooded glen before crossing back over the creek where there is an old weir. There is some noise from the adjacent highway that fades when on one of the other two trails that parallel the road. 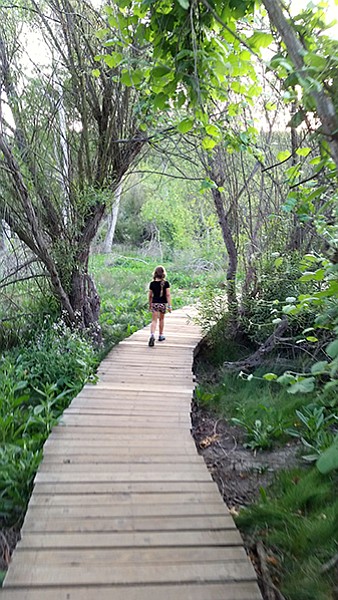 Look for mule-fat or seep-willow (Baccharis salicifolia) near water. It is a common indicator of riparian habitat because it forms thickets at seeps, drainages, and wet places. In the past, when people were out on a journey and saw mule-fat in the distance, they knew they were nearing a reliable water source. It is one of the widespread shrubs in San Diego County and is a highly valued wildlife habitat. Livestock love it, too — it was used to fatten up mules! Native Americans used it at the first sign of hair loss, making a solution from the leaves to prevent further loss and baldness. The leaves are willow-like (salicifolia means “willow leaved”) and sticky when crushed.

Another plant seen by water is arroyo 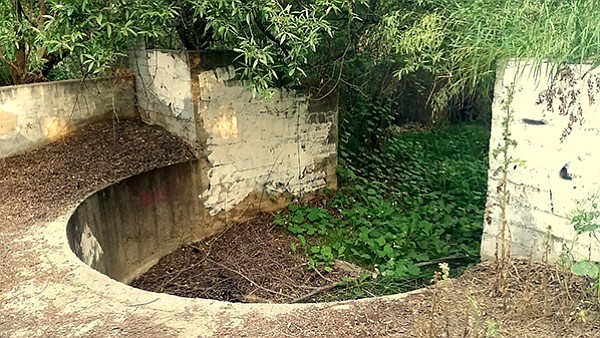 willow (Salix lasiolepis), a true willow found along riverbanks and seepages that is either a large shrub or small tree. Look at the flowers and leaves to tell the difference between mule-fat and a willow. Mule-fat flowers are nearly always in bloom or have persistent dried flowers at a terminal cluster while willow flowers are catkins (a cylindrical male flower cluster with no leaves and pollen). Hummingbirds use lint from the willow’s catkins to line their nests.

Look at the undersides of the leaves. Willows have a single vein running down the length of the leaf while mule-fat will have two additional veins. Look for galls from the sawfly wasp that are common on leaves of willows. The family name for the willow genus is Salicaceae. Before salicylic acid was synthesized in chemical form to make aspirin in about 1899, Native Americans and settlers would chew on willow bark or willow leaves as a pain reliever (especially for toothaches). They would also use the leaves to make baskets.

The north end of the preserve features a native plant garden with some signage, which will have a splash of color in spring. The trail continues to a small pond before looping back along a dirt road abutting a housing development on one side and an open field on the other.

Distance from downtown San Diego: 52 miles. Allow 1 hour driving time (Fallbrook). Take I-15 N, exit at Gopher Canyon, drive east to Old Highway 395, and turn left (north). Drive north on Old Highway 395 to Camino del Rey and turn left (west), toward Bonsall. Turn right (north) on SR-76 and then left (west) on S-13. The preserve will be on the right. The main parking lot on the south end of the preserve is accessed through a poorly signed right turn immediately after the entrance to the Sterling Bridge housing development.

Difficulty: Easy with little or no change in elevation. Paths are graded and there is a boardwalk. Dogs (on leashes) allowed. Facilities.