Cori Schumacher and Mara Elliott in the news 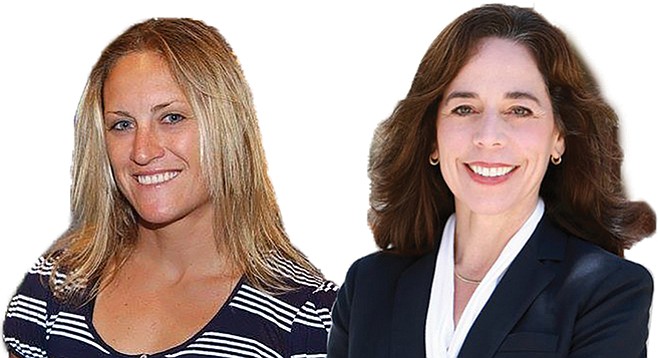 “In 2013, I spearheaded a successful international campaign against Roxy [beachware company] that made visible the growing concern and pushback against the hyper-sexualization of elite female professional surfers, a problematic issue that continues to require attention and activism,” Schumacher says on her website.

She also worked to shut down the San Onofre nuclear power plant and is backing a “solidarity and awareness-raising campaign aimed at exposing Indonesia’s brutal oppression and on-going occupation of West Papua.”

Mara Elliott was an upset winner in June’s San Diego city attorney race, when she edged out two better-financed opponents, Rafael Castellanos and Gil Cabrera — backed by Chargers honcho Mark Fabiani — for the opportunity to face off against Republican Robert Hickey in November.

Establishment Democrats tried to ignore Elliott in the primary, endorsing one or the other of the two perceived party frontrunners, and the city’s well-heeled Republicans spent big money against her, fearing she would ultimately be the strongest candidate against Hickey in the fall.

On June 1, about a week before the primary, the GOP Lincoln Club, famous for its take-no-prisoners hit pieces, weighed in with an anti-Elliott mailer costing $7800. To fund the attack, the club recruited cash from giant Herzog Contracting of St. Joseph, Missouri, which kicked in $2500 on May 23, and real estate maven Steve Avoyer with $2500.

Since when does rude and self-important ex-Congressman Barney Frank weigh in on Carlsbad political contests? Does he live out here now?