Mexico is off limits

Not your Zumwalt’s Navy 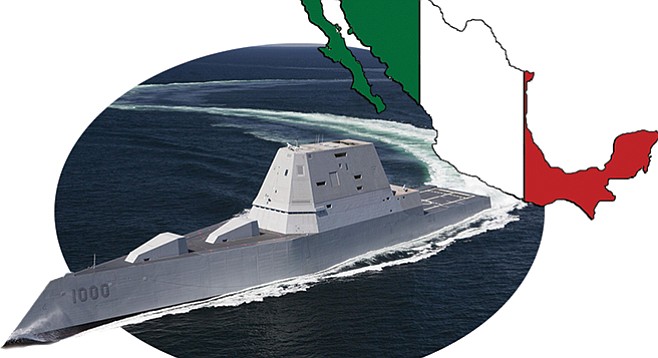 It’s almost summer, time for “Career Orientation and Training for Midshipmen West, 2016,” hosted by the Navy in San Diego for the latest crop of Annapolis midshipmen, who are being advised to avoid trouble during their stay. “During your month onboard, you will experience operational Navy and Marine Corps units and missions, meet other midshipmen from around the nation, and enjoy infrastructure and facilities found on typical naval bases,” says a letter of welcome. “Ask to see as many aircraft as possible, sit down with junior officers and talk about their individual experiences, thoroughly tour and ask to conn the ship or submarine if underway, and participate in as much training as possible such as man-overboard evolutions or drills.”

There are a few caveats. “While San Diego is an exciting and beautiful city with many great attractions, it’s not perfect, so ensure you read this information packet closely and pay attention during the Welcome Aboard/Orientation brief to familiarize yourself with areas that are off limits, establishments to avoid, and local crime.” Certain rules of dress are also enforced. “Males may not wear earrings on any military installation at any time. The wearing of collared shirts (including ‘Polo’ style shirts) is always considered appropriate, unless they have offensive/ derogatory signs/words. Civilian casual clothes and appropriate beach attire may also be worn to the picnic on Saturday, 21 May.”

But midshipmen looking for a quick trip to Tijuana as part of the summer’s training are warned to stay clear. “MEXICO IS STRICTLY OFF-LIMITS. This measure is not meant to be punitive, but continuing incidents south of the border involving military personnel have necessitated this restriction for your own safety.” In addition, “In order to preserve good order and discipline…and to prevent any perception of impropriety, Midshipmen are not allowed to visit or host members of the opposite sex in quarters.”

"Midshipmen are not allowed to visit or host members of the opposite sex in quarters.”

... and gay Midshipmen are not allowed to host members of the same sex? This isn't Zumwalt's navy and it's time they understand that 'order and discipline' can be disrupted in new ways now.

The military, like most bureaucracies is quite good at having a rule for every situation. However, a population of adults needs no rules of behavior. Common sense and the 'golden rule' will guide them. Such people are insulted by nit picking rules imposed by idiots.

Really, "a population of adults needs no rules of behavior?" And here I am, praying that common sense and the Golden Rule will guide the American electorate in selecting a President in November.

The guidance sounds sensible; besides, Midshipmen are only adults-in-training.