The restless mind of Sonny Smith 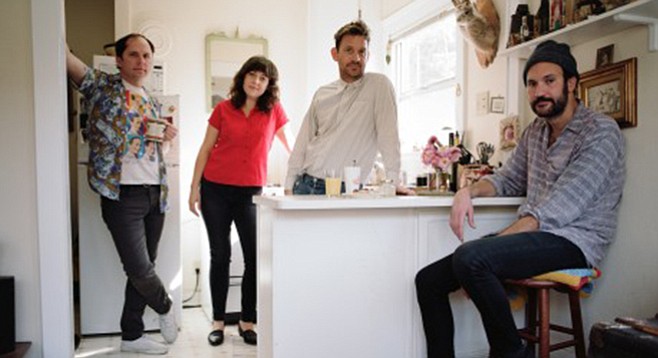 ...off of Moods Baby Moods by Sonny & the Sunsets

Sonny Smith seems like one of those individuals who has no trouble whatsoever bending people to their various whims. One example: half a dozen years ago, the Bay Area author/songwriter/filmmaker invented 100 bands, none of which actually existed anywhere except in his abundant imagination. Next, he encouraged 100 artists to create original cover art for said fabricated bands, while he himself dreamt up the bands’ backstories and wrote all of the music, enough for 100 singles, both front and back sides. With the aid of a number of musicians, Smith recorded the songs, plugged them into a jukebox, and exhibited all of this at Gallery 16 in San Francisco.

Smith is 42 now, and he fronts a very real band called Sonny and the Sunsets. Real, in the sense that the unit actually performs live and records and travels from town to town; the Sunsets, an otherwise revolving cast of musicians, are now touring in support of the latest full-length to come from the apparent bottomless pit of Smith’s creative mind, Moods Baby Moods.

A flashback of what indie rock once was, the Sunsets can sound like everything from ancient surf rock to doo-wop song forms that somehow got damaged. Each melody abounds with so many ideas as to be disjointed, but is likewise corralled by the drummer, who holds it together with machine-like precision. This is the most imaginative music I’ve heard in years. It’s mostly about the stuff of novels and short stories — in other words, the human condition: “Now there is someone talkin’ to my wife,” Smith groans, “And you know the feelin’ cuts just like a knife/ Will I ever feel alright, dear?” Lest you get the wrong idea, the Sunsets are not here to vanquish social chaos or bad politics; not all musicians care that deeply. Some of them are content to just make things up.