Letters and notes to the editor 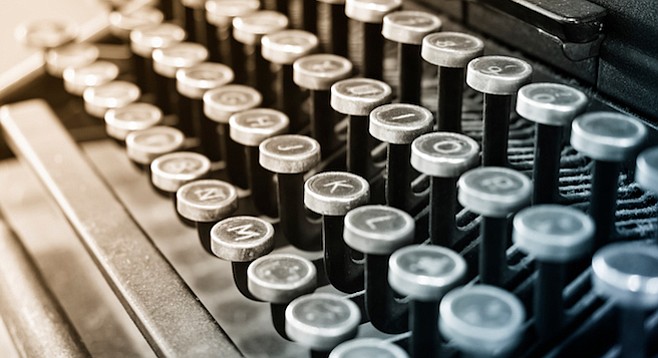 To the [Dog] Rescue

My husband and I have been involved in rescuing Baja dogs for years. We noticed your section, “Play with Baja Rescue Pets,” in the “Fun Things to Do” issue of the June 16 Reader. We feel that the information provided to the Reader should be updated.

It mentions that 5000 dogs are electrocuted every three to four months in Tijuana. Actually, there have been several hardworking groups working together to eliminate electrocution and replace it with humane euthanasia. One of these groups is the Humane Society of Tijuana. Their contact info is friendsofhstj.org. They have been working for years to eliminate electrocution in Tijuanan pounds, and works to make new animal-rights law in the city of Tijuana. They have been active in the community for over ten years.

The article also mentions that there’s only one no-kill shelter in the northern Baja area. Actually, there is another no-kill shelter close by, near the town of Rosarito: the Baja Dog Rescue, a nonprofit organization open since 2010. They’ve rescued over 6500 dogs. They accept volunteers and adopt dogs in the San Diego area. Their website is bajadogrescue.org.

We hope your readers will enjoy knowing there is a lot of effort for the dog-rescue situation in Baja, and if they want more information they can contact either one of these organizations. 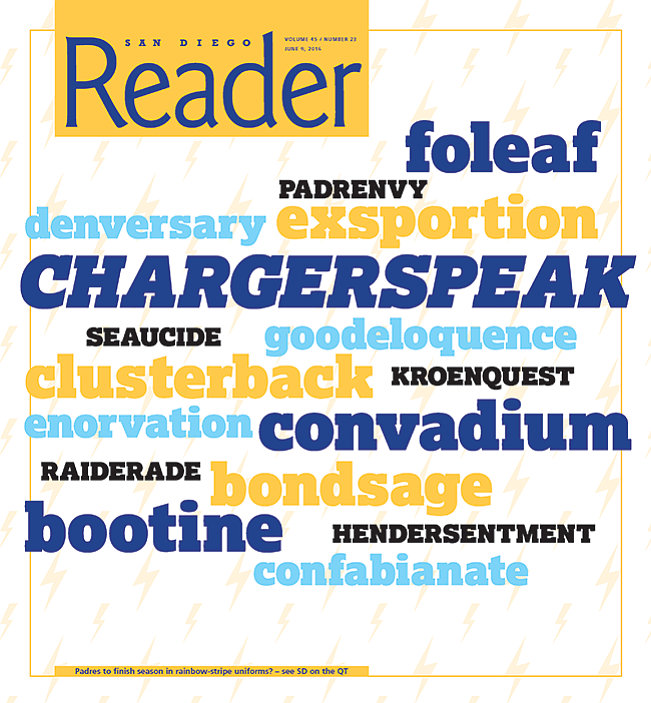 Regarding your cover, “Chargerspeak”... “Seaucide?” Really? How do you think that makes his family feel? Not to mention his fans.

This is in response to your cover where you had “Seaucide on it” (. I think that’s pretty insensitive. I have a pretty crass sense of humor and I don’t get offended by much of anything, but I think that was a little over the top and a little classless to put that on there.

I don’t think he deserves that kind of recognition. He was a good guy. He had problems, and he had concussion issues. To make fun of suicide is completely insensitive and unacceptable. 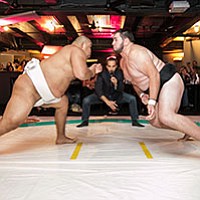 On page 36 of your June 9 issue you have an ad of two superbig sumo wrestlers for the Sumi Sushi Show (Your Week), and I would simply like to comment that there is another sport in the United States of which I have coined the phrase, “American Brute Sumo,” and that sport is American football. Need I dwell on the fact that these people particularly along the lines are well over 300 pounds and actually have a sumo match every play.

I guess it’s not easy being green. A few years back, the powers that be decided to remove some “invasive species” from Tecolote Canyon. I watched from my back yard as mature palm trees and other plants were cut and taken out by a helicopter that staged at a nearby elementary school playground. I guess a million bucks (literally) doesn’t go very far, as I still gladly see many nonindigenous plants still standing.

Three Generations of Refugees on Welfare

In the 35 years I’ve worked in the Easy County Social Services office, I’ve seen an influx of Chaldeans and Haitians coming in and applying for services. I had a mother come in with the forms filled out, and she’s getting complete services for her and a couple kids. A few years later the daughter comes in, because she’s expecting a baby.

I’ve processed over 1000 refugees. Over and over again, it’s a generation — grandma, mother, and daughter. Three generations are always on welfare. They never go out and look for jobs. They just come here and go on social services. They’re just taking all of our resources from the hardworking people who do come here for jobs.

They should close the border and not allow anyone to come in unless they have a sponsor who can give them a job place to live, and not take them directly to social services.

"To make fun of suicide is completely insensitive and unacceptable." Nonsense. Comedians, a famously downhearted group, not infrequently joke about suicide. Just one example: https://www.youtube.com/watch?v=aHBVVA8dKlQ But more to the point: if you actually read the definition provided for that particular portmanteau, you find: "Any method of suicide in which the brain is left intact so that it may be studied by medical researchers interested in the effects of regularly repeated blows to the head over the course of a career in professional football. More generally, a death that is somehow both tragic and noble." Not sure how that could be construed as "making fun of suicide" or Mr. Seau.