Horse with no permit 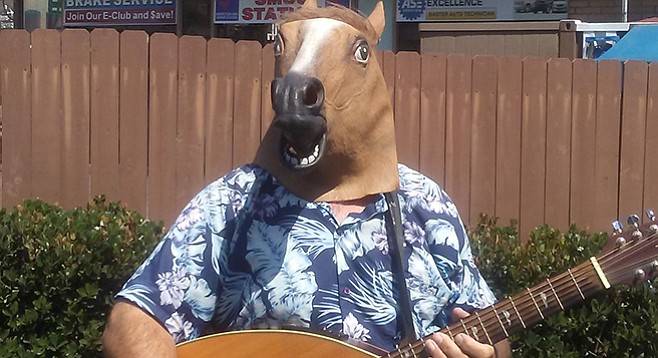 “Federal law says we can busk, ’cause we’re entertaining for tips, not panhandling, or begging,” says Brian Demers, who used to play guitar in GG Allin’s hard-rock band Malpractice but now can be found busking around town wearing a plastic horse head. “I can sing and play wearing the mask, but it’s like wearing a blindfold. I can only see out of the nose and mouth.

“I started busking about two years ago, after I lost my job. I used to write political music for talk radio. Roger Hedgecock used to play me, Rick Roberts took a Stones song off and played mine...Stacy Taylor opened up his show with my Saddam song ‘Bye Bye Saddam.’” 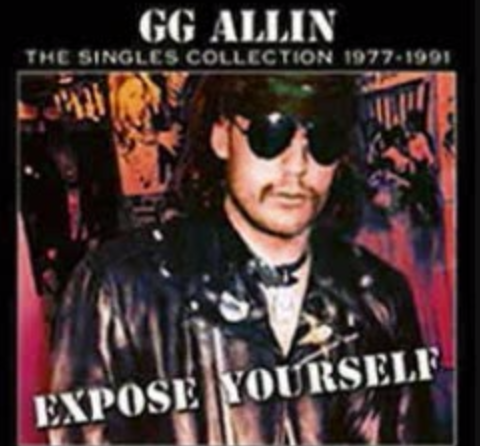 ...by Malpractice, with Brian Demers on guitar and GG Allin in drums and included on this GG Allin singles collection.

He says his horse-head act goes over best at shopping centers where shoppers have spare change from fresh purchases, especially weekends between noon and four. Some stores welcome his presence to draw attention and crowds to their storefronts, but other retailers are less accommodating.

“I was in front of this one store just about to pull my guitar out of the case, and the manager standing there says to me, ‘Don’t even think about it,’ as if my guitar was a gun or some kind of weapon. Unbelievable.”

He tends to avoid big busking hubs like the Embarcadero and the Prado near the Zoo. “Balboa Park sucks for busking. Cops kick you out if you’re using an amp, even a little five-watt. Cops walk around checking us to see if we have a permit.... They have an illegal lottery for permits to play at the park, and only 20 win the stupid-ass lottery out of...could be a hundred people. So they’re restricting our First Amendment freedom of speech and artistic expression.”

Of course, “A Horse with No Name” is a popular number for him. “Wearing my horse mask, I’ve had only very few kids freak out over it. I’ve had more women telling me it’s scary and not getting it.”

What ever happened to Malpractice, which featured GG Allin on drums? “We did the 45, I paid for out of my own pocket, and Columbia Records liked it. We were just about to get signed...then GG and his sister Merle went punk. They asked me to stay with them, but I didn’t want to punk out...

“I thought we were too good for punk.”