A 15 percent levy on Pineapple Express? 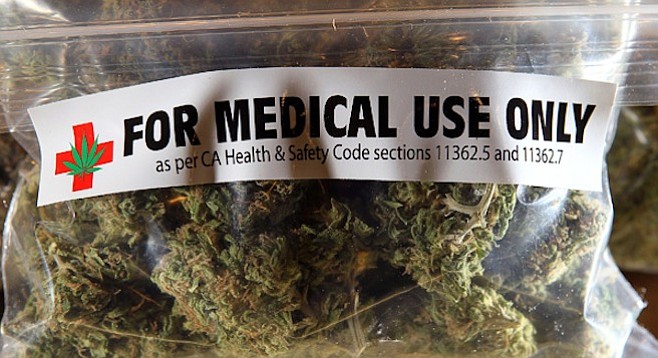 The city council's Rules Committee on Monday (June 20) voted to move a proposal floated by councilmember Mark Kersey to impose a 10 percent tax on the sale of marijuana at approved dispensaries within city limits. Despite Kersey's assurances to the contrary, medical marijuana patients are worried about a potential spike in the cost of their medication.

"I personally disagree with the Adult Use of Marijuana Act, and will be voting against it...but we have a responsibility to plan ahead for the changing legal environment regarding recreational marijuana," Kersey told a crowd of marijuana supporters and opponents before they were given an opportunity to provide testimony.

"The measure in front of us today would be contingent upon the state initiative passing, and as such would only apply to recreational marijuana if legalized," Kersey continued, stating that revenue would be necessary to offset increased law enforcement and other costs to the city if legalization takes place. "I believe this is a timely venture, as there's already talk at the state level to ban the future imposition of local gross receipts taxes."

Referring to the text of November's legalization proposal more than once, Kersey assured that "the state law makes it very clear that cities do not have the ability to tax marijuana for medicinal purposes."

In a handout prepared by Kersey's office, however, it's noted that several cities upon which the local law is modeled specifically target medical cannabis for taxation, often at lower rates than recreational cannabis would be taxed at if it were to become legal. Others were more ambiguous.

In the actual language of Kersey's proposal, both "cannabis businesses" and "medical marijuana businesses" are defined as "any business activity which entails the distribution, delivery, dispensing, exchanging, bartering or sale of either medical or non-medical cannabis."

While one section does allow the city council to set different rates for different business types (with a cap of 15 percent, which would be in addition to another 15 percent state tax imposed on non-medical cannabis by the statewide measure), as the language was written in a handout provided to meeting attendees appears to call for a tax of 8 percent on all city dispensaries, whether medicinal in nature or not.

Meanwhile, the state ballot measure seems to explicitly sanction, not ban, local taxes, stating in part that "the taxes imposed shall be in addition to any other tax imposed by a city, county, or city and county."

"This measure is a double-edged sword," warned Phil Rath of the United Medical Marijuana Coalition, which represents most of the city's existing legal dispensaries. "Without a realistic plan to end illegal storefronts, this tax will only increase our risk of going out of business. The oldest legal operations in the city have only been operational a few months and have not reached economic stability. The addition of a large tax on patients in the midst of a transition from a black market to a regulated industry could have serious consequences."

Other opponents, ignoring Kersey's assurances both before and after testimony, attacked the tax primarily as a burden on medical patients. Proponents of the tax largely used their speaking time to voice opposition to the presence of marijuana in general, in either medical or non-medical uses. One repeatedly referred to "the 25 pages of pot ads in the Reader" as a particular societal ill.

After discussion, the committee voted 4-1 to refer the measure to the full council for consideration, with the goal of placing an amended version on the November ballot.

20 to 25% would be better. I don't understand why we need so many of them in the first place.Most people that buy it are not paying taxes now. They just suck the system dry so they should pay a higher tax to stay stoned.

No. There should be no more tax applied than alcohol, tobacco, firearms and soda. Can you understand less hate makes things better and less sick and fearful? = less drug use!

Depression of desperate is not a joke. 65 families owning 98-99% of worldwealth is unacceptable because it makes everybody else sick and poor.

Shirley, the real problem is the middle class is being sucked dried by paying the way for all the freeloaders in the world. Ca, has the most homeless people in the nation because we give them the most aid. I am tired of paying for all the welfare for people who don't try to help themselves. We don't need a pot shop on every street in the city because the people on welfare don't have cars. Giving my money to lazy people doesn't fix the problem either! Tax the hell out them.