"We estimate it will take six to ten months to do the work." 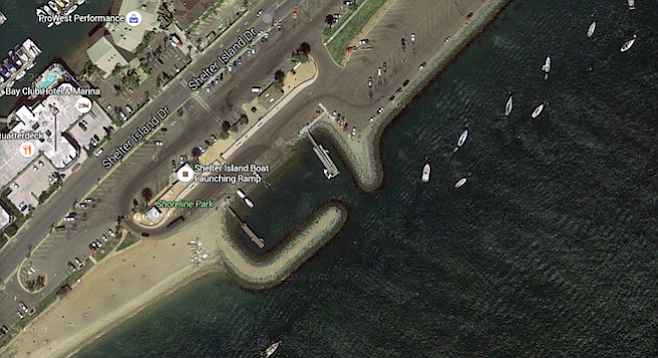 The crumbling Shelter Island boat launch facility, with the most heavily used boat ramps in San Diego, is getting a revamp in the next year. The Port of San Diego's plan to replace the 60-year-old facility and add amenities including Americans with Disabilities Act improvements won California Coastal Commission approval on June 9. 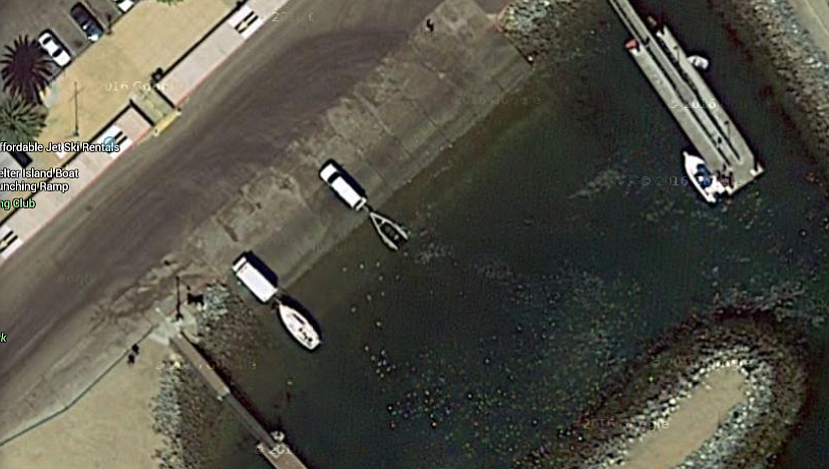 The ramp's poor condition is apparent even in satellite imagery

The ramp was built in 1956 and last updated in the 1970s. It is the closest public ramp to the open seas, according to local boaters. A state use study concluded that there are 50,000 boat launches there each year.

"They said it's the busiest boat launch in California," says William Melton, the project manager. "It has a nice Hollywood-style roundabout that makes maneuvering easy."

The port did extensive outreach and found the users want more maneuvering room in the water and more docking space, Melton said. That will be accomplished by removing the entire north jetty and replacing it with a concrete wall at the outside edge.

"It adds about 80 percent more space to the basin," Melton said.

The $9.5 million project is funded with grants from the California Department of Boating & Waterways, the Wildlife Conservation Board, and funding from the port. The port plans to replace the existing ten-lane concrete facility with 10 new lanes. They're demolishing the entire area and replacing the docks, gangways, vehicle- and trailer-maneuvering area and much of the existing rock jetties in a layout that will increase the basin from about 23,00 square feet to 41,000 square feet. The new walls remain in the jetty footprint.

The plan also adds five-foot wide walkways with bigger overlook areas along the top of the bulkhead walls — all of which are designed to meet ADA standards. The floating docks are also being replaced, as are the gangways, including an 80-foot, ADA-accessible gangway. There will be a better-marked kayak drop-off area and minor improvement to the beach.

"We'd like to start work in January or February 2017," Melton said. "We estimate it will take six to ten months to do the work."

The port is also going to create 600 square feet of eelgrass to make up for the 323 square feet that will be lost with the removal of jetty riprap. A tough underwater grass, the beds of eelgrass provide for fish egg-laying, a safe place for juvenile fish and for waterfowl foraging, according to the coastal commission.

Cofferdams will be used to wall off the freshly poured concrete while it cures.

During construction, Melton said boaters will be able to launch from the Chula Vista marina on J Street, from Pepper Park in National City, and the Glorietta Bay ramp in Coronado, as well as the Mission Bay ramps. People in the military can also use the Naval Training Center ramp.

"We're going to put a map up on the port website," Melton said.