Fat flatties on the flats 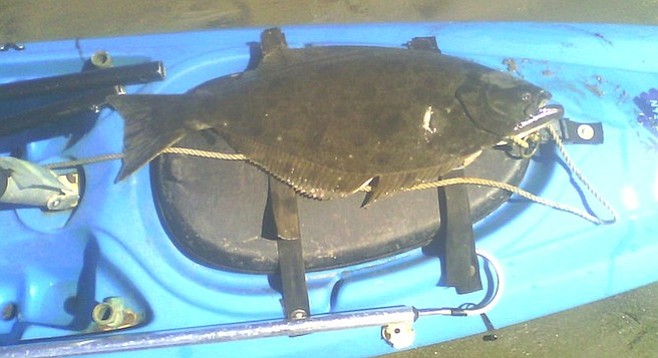 Inshore: The pelagic “tuna” crabs that have been painting many beaches red and sometimes requiring dozers to clean them up are also causing the inshore fishing to be a little iffy. Most fish caught, whether calico bass, rockfish, or sheephead are plugged full of the little red "langostinos." At times, when the bite is slow, it is shut-down slow as the fish are fat and full, but when it’s on they are still hitting even with their mouths packed with crabs. I’ve seen water wolf videos that show crabs so thick on the bottom in places, that’s all you see other than the water. So, if it’s slow, hang in there, fish aren’t worried about their waistline and will continue to fatten themselves as long as the pelagic crabs are here.

Outside: Offshore ¾ day, overnight and longer trips are either hunting outside or down the line from the upper Nine Mile Bank down past the Coronados to the Colonet area for both the big bluefin tuna and foraging schools of yellowtail that have moved up in the water column as the water warms. The big tuna can be boat shy and with all the traffic on the water looking for them the individual boat counts can be low to nil one day and limits of two fish each the next. Smaller six-packs and private boaters have been doing well as they can move faster and run quieter. The yellows are a bit less shy but are still in the run-and-gun mode that is typical for this time of year.

Notable: Halibut have also been loading up on the red crabs and are getting fatter than usual. For instance, a barely-legal 22” halibut usually weighs between 4 and 4.5 pounds. This year, I have caught a couple over five pounds at 22” in length. My friend Angel in San Quintin won the MakoBob Halibut Tournament on June 11 with a smallish 25” fish that went 6.5 pounds and had a deep dimple along the spine due to the thick loins on its topside. Locally, both San Diego and Mission bays have some honey-holes that hold good sized halibut to 40” that are biting well on plastics and bait at the bottom half of the dropping tides. Outside, try the flats and the sandy slots between reefs in 20 to 80 feet of water and keep your offering “low and slow.”