City departments claim they're not responsible, so citizens remove tags 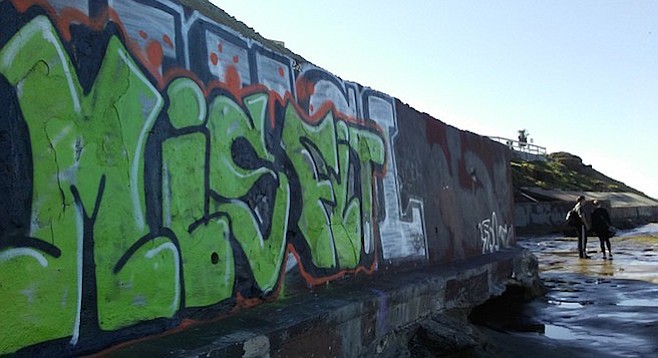 Ocean Beach residents have been asked to report graffiti and tagging that occurs along the Sunset Cliffs seawall, from south of the Ocean Beach Pier to Orchard Street via the city’s Street Division online reporting system.

Despite multiple reports filed by people in the neighborhood, the graffiti and tags have gone untouched, and residents are fed up.

“When I tried it [reporting via online] the email response was the graffiti was outside city limits and they couldn't help,” commented one resident on Facebook. “Never could get them [the city] to explain that reasoning.”

There are at least a half a dozen reports that were made via the online reporting link, however, since the city implemented it’s new “Get It Done” app earlier this month, records from 2015 are not traceable online and had to be requested via the public records act.

After contacting the City of San Diego’s Street Division in April about their lack of response, Rodney Williams (who supervises graffiti abatement) assured me responsibility falls on the Park & Recreation Department

“We only do street lights, lamp posts, buildings, things like that, and contract with Urban Corps, who do residential abatement only,” said Williams. “I’ve emailed Parks & Rec your request and it should be painted out soon, give them a few days.” (Three months later, the graffiti remains.)

According to Williams, online requests to paint out tags along the seawall in Ocean Beach were ignored by Street Division because they were going to the wrong department. “Yep, it’s not us,” Williams confirmed. “Parks and Rec is responsible.”

Another Street Division employee (who asked not to be named) said the graffiti removal along the seawall is 100 percent the responsibility of Park and Rec.

“Parks does parks — that’s part of their infrastructure, that’s their area; we are Streets, we do streets — building, street lights, things of that nature.”

Meanwhile, a Park & Rec employee (who also did not want to be named) assured me that the graffiti hot spot falls under Street’s jurisdiction.

“It’s clearly Street’s area of responsibility; it is not our responsibility but [Park] ranger staff will be meeting next week to try and get some type of volunteer group going to help address the graffiti if Streets refuses to do it.”

That conversation also took place in April; more tags have appeared since.

According to Park and Rec’s website: “San Diego Park and Recreation oversees nearly 40,000 acres of developed and undeveloped open space, more than 340 parks and 25.9 miles of oceanfront shoreline from Sunset Cliffs to La Jolla.”

It would seem Park and Rec is in charge of the coastline, right? Not even close.

The Park and Rec rep stated that since the retaining wall may be a “paper” street, it would be up to the adjacent property owner or Street Division to cover graffiti. (A paper street is one that appears on a map, but doesn’t exist.)

So I went back and spoke to another source from Park and Rec. They insisted “the brown retaining wall here (OB) is Street’s responsibility.”

The source said Park & Rec had previously provided supplies to volunteers but due to budget cuts, they can’t provide anymore; the source claimed that the help his department did provide seemed to enable Streets to keep ignoring the problem.

According to one long-term ocean-front property owner, “The finger-pointing between Parks and Streets has been going on for 20 years,” he told me.

Although the sources I spoke to at both Park & Rec and Street Division have offered to donate paint and/or help, so far, the only people taking action are residents.

Volunteers gathered along the seawall Sunday, June 5th, armed with rollers, paint, brushes, drop-cloths, and buckets. Tracey Carrino and her boyfriend Shane drove out from Santee.

“We grew up in O.B., we’re from O.B., and my best memories are walking the cliffs and enjoying tide-pools with my son on weekends,” said Carrino. “When I came here recently and saw all the graffiti, it was so disgusting.”

“We went to the cove and as we were walking down the steps I was, like, ‘What the hell?’” Shane said. “When we walked around the corner and I saw the seawall, I said, ‘We need to do something. This is not Ocean Beach.’”

The couple donated their time and money for supplies. “It’s so beautiful here and we really wanted to help,” said Carrino.

Not only did Carrino drive out from Santee to help, she spearheaded a fundraiser for supplies. The Ocean Beach Graffiti Removal Fund aims to keep our beach and community clean, safe and beautiful by promptly removing graffiti along the seawall.

‘We are a concerned and dedicated team of individuals that care about our environment and surroundings. During the past two years the graffiti has gotten out of hand at the Sunset Cliffs area of Ocean Beach…. We have many volunteers that would like to paint over the graffiti but no money to buy paint and supplies. One 5-gallon bucket of paint is $100.00. On Saturday we had about 20 volunteers to paint but we did not have enough paint to go around. 17 gallons of paint lasted only a couple of hours. Although this was an improvement, we have a long way to go. We will need approx. 300-400 gallons to do the whole sea wall. We need several different colors of paint and a lot of it. We also need rollers, trays, drop cloths. We have acquired a paint sprayer and generator to use but will need fuel to run them as well. The whole project is approx. 1/2 mile of seawall.’

The OB Graffiti Task Force group on Facebook, is also in the early stages of forming a “Seawall Committee” to assign regular paint-outs to volunteers to stay on top of the problem. If enough money is donated, the plan is to arm its volunteers with mini paint-out kits.

I have also reached out several times to Urban Corps to inquire about hiring them to abate residential walls, they have not responded to my requests for comment or help.

A message was also left with Mayor Faulconer’s office on June 1, but no reply or comment was forthcoming.

Several merchants have offered to help with donations to purchase supplies, but everyone has the same question: why are we doing the city’s job?

This is typical municipal departmental buck-passing on steroids. I don't doubt that it has been going on for twenty years, after all, it seems to be working. Drag your institutional feet for long enough and the citizenry will just give up and do it themselves. Great tactic, huh? While I cannot say for sure that such things do or do not go on in other cities in this county, why is it usually San Diego that is where we learn of it? Smaller cities can and should be more responsive to the residents and to reports of things needing correction.

Is San Diego now too large to be governed and managed? There is plenty of evidence that such is the case.

The problem with a large bureaucracy is that administrators build their little fiefdoms and only want to protect their territory. The problem always lays at the foot of management. There are far too many layers of management resulting in the "not my job" attitude. Workers do what their supervisors tell them to do. San Diego is not too large to be managed if the so called city leaders would lead and make fewer people responsible.

San Diego has just reelected a mayor who promised to get busy on infrastructural repair and upgrades. There's no evidence that in those two years since he won the seat in a special election he's done much or anything. He allowed this goofy fight with the Chargers and Deano S to distract himself and the others at city hall. So, that bureaucracy that you describe continued on its merry way of ducking its responsibilities. Over thirty years ago when I resided in the slobberin' city it was nearly impossible to get city departments to respond to any sort of complaint or request. That's one of the reasons I moved. Nothing since then has made me think that the "do nothing" city government has gotten better; in fact, just the opposite is the case. It always cries about lack of money, yet it has millions to squander on pet projects, corporate giveaways, and the always-popular subsidies for the pro sports teams.

Amen! I was born and raised in San Diego. As an adult I chose to move out of San Diego, for the very reasons you articulate, and have never looked back