Parents are like hipsters when it comes to their kids 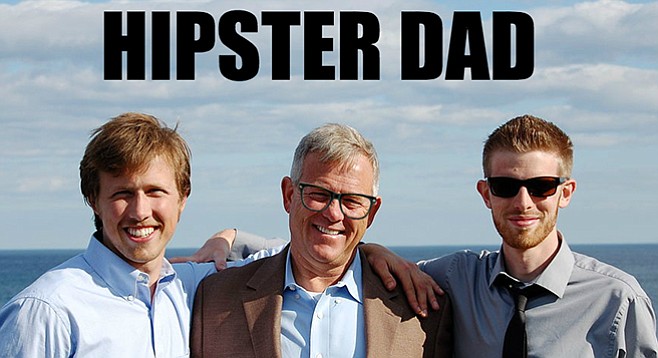 My 62-year-old dad always says he hates Father’s Day. He calls it a bogus Hallmark holiday. He also likes to point out how TV’s image of “Dad” as a stereotypical bozo does nothing good for our collective perception of fatherhood. He’s obviously a pretty salty guy, but he’s also not wrong. I support his objections, so I don’t want to just get him a new belt sander, or whatever Amazon suggests for Father’s Day; but I also know he will be super bummed if I just ignore the holiday, even though that seems like the logical course of action given his attitude, because he has a soft side. What’s a good way to show Dad I care on Father’s Day without buying into the hype?

I’m glad to hear that your dad shares the hipster aversion to mainstream, corporate-sponsored holidays in 21st-century America. I’ll hazard that he even felt that way before it was cool. We hipsters object to celebrating anything, not just father- and motherhood, with the purchase of cheap crap that nobody needs. Still, I recognize that the proliferation of stereotypically cheesy Father’s Day gifts, like monogrammed steak knives and whiskey-flavored marshmallows, is itself a response to the sheer difficulty most people face over Father’s Day shopping. You and your dad are far from alone in finding Father’s Day more of a burden than a pleasure, and in feeling that typical Father’s Day gifts are pretty insincere.

As a hipster, I feel an instinctual compulsion to repurpose things and to salvage the obsolete. What else could explain why my bookshelf used to be a stepladder, I drink from old Mason jars, own several typewriters, and my bathroom’s wallpapered with an ironic mix of 1960s Good Housekeeping and Playboy pages (saved from the dumpster by yours truly following the passing of my late paternal and maternal grandparents, respectively)? If I had my way, we’d blow the dust off this Hallmark holiday and make it into something for which even I’m not too cool.

Really, when you think about your father, what’s the quintessence of his dad-ness? It’s not golf, sports on TV, cooking on the grill, home improvement, or any of the bogus “Dad” things. It’s you. That’s right. Ignoring hypothetical siblings for the sake of argument, your very existence is the sine qua non of his fatherhood. Any Father’s Day recognition should begin and end with expressing something unique about your relationship with your dad. A simple letter will mean more to him than anything you can buy online.

If the urge to give a gift overwhelms you, do the hipster thing: resist materialistic consumer culture by crafting something. Parents are like hipsters (at least with respect to their children) in that they often care more about the how and why of a thing rather than the thing itself. Dads like to say, “My kid made me this Post-It flipbook of the time I taught him how to ice skate” even more than hipsters like to say, “I’ve started buying all my goat milk from the local urban dairy where they do goat yoga.”