The torta was truly drowned 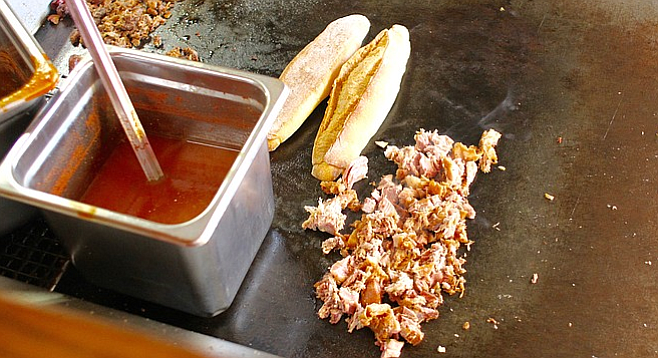 The torta ahogada (“drowned sandwich”) is one of the many signature dishes brought to you by Jalisco, the state that is home to tequila and also my paternal family’s home. From what I know, there are only two places in Tijuana that have tortas ahogadas, Tacos y Tortas Ahogadas el Tio Pepe and Carnitas el Jerezano. 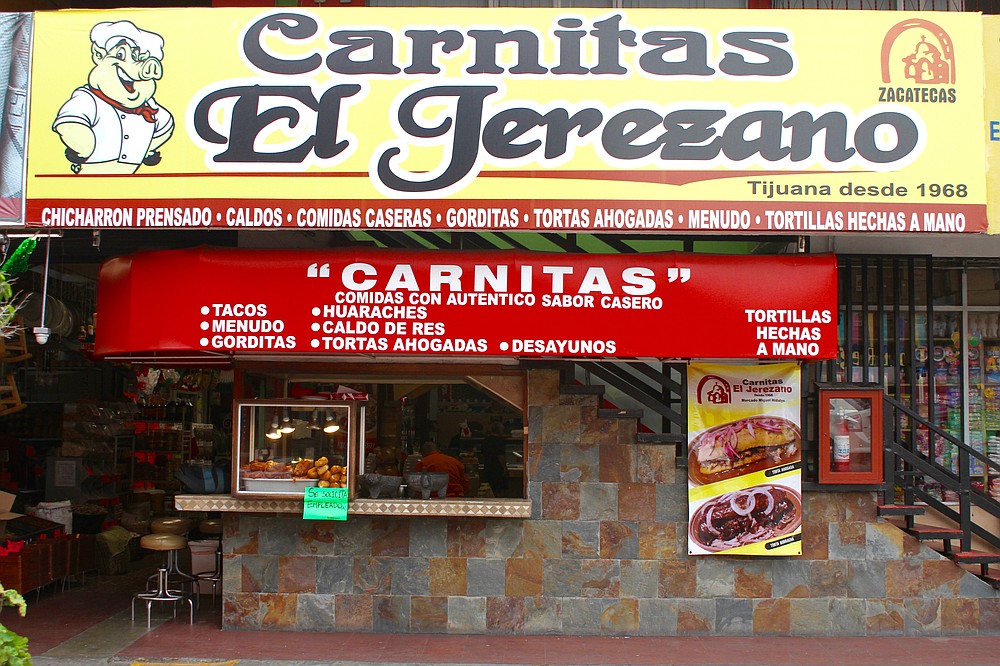 The former is located in Colonia Cacho, and it’s decorated with things from Jalisco, most predominantly the love for their soccer team, Chivas de Guadalajara (the state’s capital city). The latter hails from Zacatecas, a state neighboring Jalisco, not known for drowned sandwiches but rather its mining past. 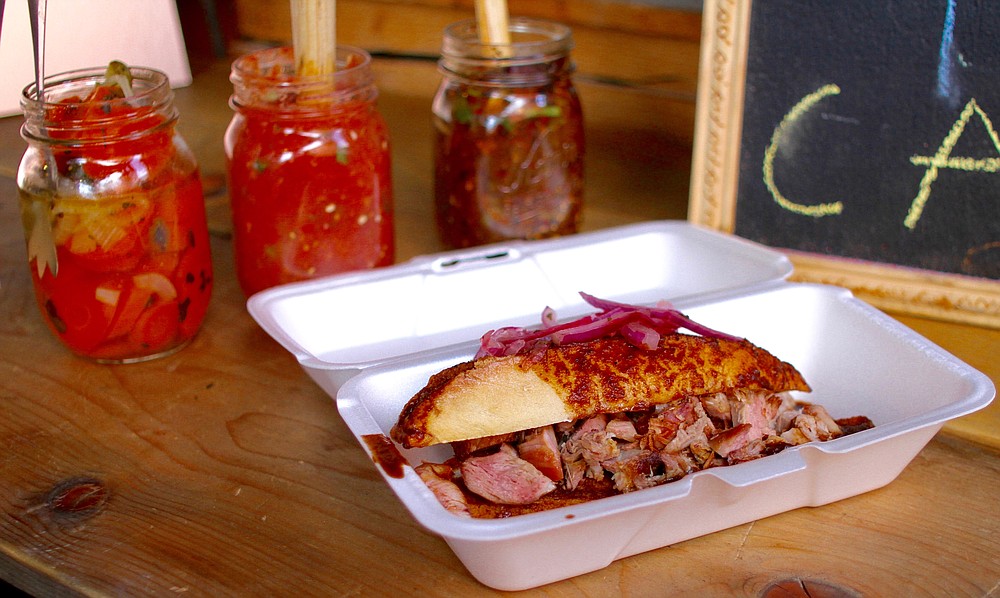 Carnitas el Jerezano has been in Tijuana since 1968. I first noticed them when they opened a new kitchen in Donkey Punch’s tap room inside Plaza Fiesta. I ordered a torta borracha (“drunk sandwich”), which is the same concept as the ahogada but is spruced up with modern hipster terminology. The torta, instead of being completely drowned, was splashed with a dark brown salsa made with chilis, stout, and mezcal. 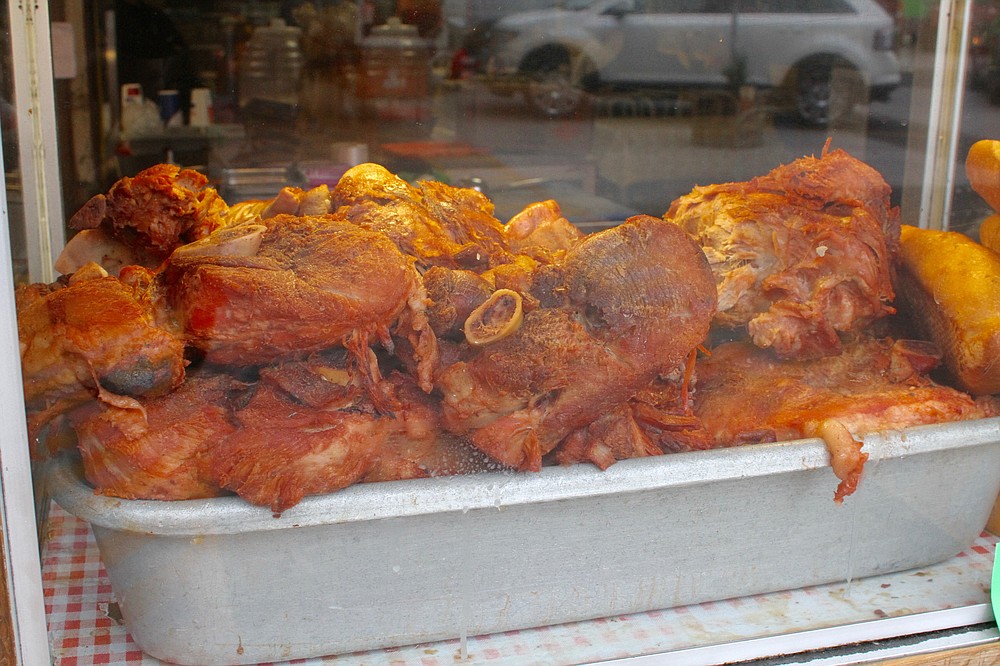 Pork meat display. You get to choose.

I got the torta to go since I refuse to drink Donkey Punch brews for a few reasons:

1) Their name is a sexual act that implies violence.

2) Their logo is an exact replica of Wild Donkey Brewing, a brewery in Redlands, California, established before Donkey Punch.

3) I had a horrible experience with one of their employees at a beer fest in Ensenada in 2014. The employee forced two beer samplers on me. Assuming they were free, I drank them and started to go on my way. The guy then demanded that I pay. 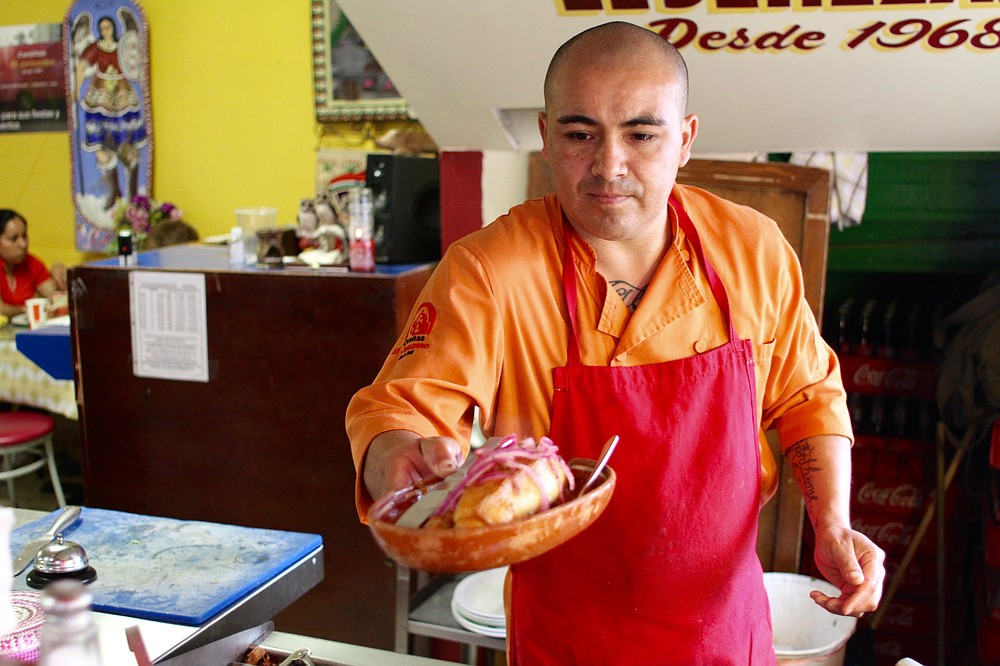 This guy is both the cook and the server

I ate the torta at a tap room nearby. For my taste, it was better than the popular Tio Pepe, despite not being fully drowned. The birote (salted crunchy narrow sandwich bread, similar to a baguette) is imported from Guadalajara, the pork was plentiful and on point, and the salsa was great but not truly an ahogada.

I visited the original location in Mercado Hidalgo weeks later, located next to the south entrance. This time I got the original ahogada. The cook asked me if I wanted mild or spicy (he didn’t give me the option of no spice, but it does exist as a tomato-based sauce). I asked for mild, and it still gave me watery eyes and a runny nose. For those brave on spice, ask for it extra spicy. I dare you. For those not so fond, get it sans spice — you can always make it spicier, but there’s no way of making it less spicy. 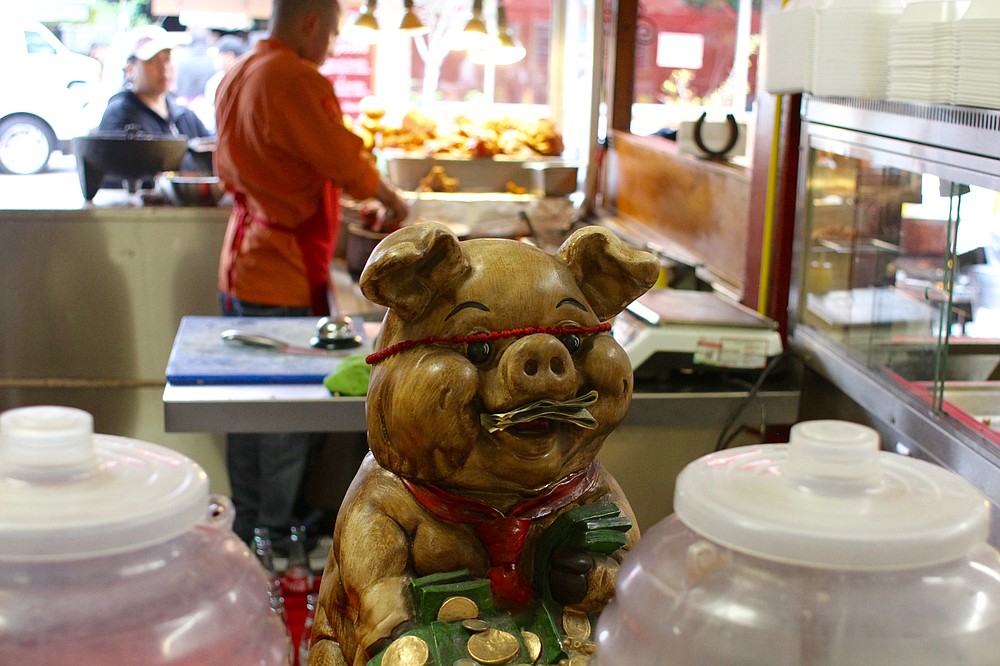 Water helps quell the fire a little bit. I got the torta with a small glass of agua fresca de guayaba. The flavored water was served on an old Burger King paper cup, and it tasted similar to the Mexican product Boing! (which is a good thing).

The torta was truly drowned. Topped with red onions and oregano, it was a very messy eat (as intended). Despite not being from Guadalajara, this also was better than Tio Pepe, mostly because of the birote and the pork.

Carnitas el Jerezano also serves all types of Mexican dishes such as tacos, gorditas, regular tortas, chiles rellenos, chilaquiles, quesadillas, etc. That feast I’ll have some other day. For now, the drowned tortas will bring me back. Tortas ahogadas cost around $3.50. None of the dishes are over $5.