Fish the direction opposite the drift 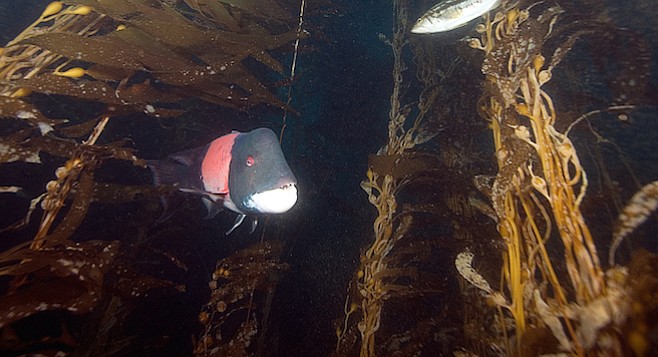 Inshore: Half-day boats are still concentrating on the great calico bass bite of the kelp in Point Loma and La Jolla. The inshore yellowtail bite slowed a bit, but the size of the fish are a bit larger than the schools of three- to six-pound "rats" that have popped up in recent weeks. Sheephead are also on the chew. They are usually found in 30’–80’ of water anywhere near reefs, kelp and crustaceans to crunch. Ghost shrimp or market shrimp, whole, on a dropper loop work the best. The sand bass are biting well in 40’–80’ of water, though not reflected in the counts as the local short-range boats are concentrating on the reefs and kelp edges and not fishing the flats much. Most of those sand bass caught, along with some good-sized halibut, were from the sandy slots between the reefs.

Outside: The yellowfin tuna numbers more than doubled again over the previous week as they load up on just about every high spot outside, though the dorado dropped off a bit. The bluefin tuna are still around and as near as the 9 Mile Bank, but they are coming in ones and twos as opposed to the foaming schools just off the coast a few weeks back. Yellowtail continue to dominate the fishery at the Coronados and south along the coast past El Rosario, as well as north past Catalina and San Clemente Islands. Private boaters are still finding an occasional striped marlin in the warmer water 15 to 20 miles offshore.

Notable: Swimbaits for tuna. Yes, those 5”-8” swimbaits in the box sometimes work better than dropping a fly-lined bait back on a school of tuna on a jig stop or when pulling up on a school of ‘foamers’. I like purple and black MC or Fish Traps on a sturdy, “tuna tough” type leadhead in the 1 to 1.5 ounce weight. A sturdy, longer inshore rod (I like the Seeker Inshore series) will get the plastic on the school and away from the boat. If on a jig strike, I’ll cast out off the back corner; say 8 o’clock or 4 o’clock, depending on the wind or drift, as you want to be fishing the direction opposite the drift, usually into the wind. If pulling up on a school, then I fire it from wherever I can to get it into the fray. This way, instead of hunting for and trying to keep a hot bait on the ready, you are able to present a bait directly on the fish within a couple seconds of hearing, “Hook Up!”