Not littering Coast Hwy 101 is the Norm 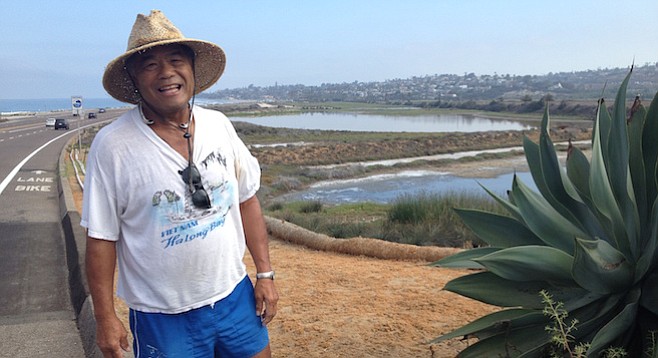 Norm Tang is a local celebrity among morning commuters, cyclists, and joggers along Coast Highway 101 in Cardiff by the Sea. But many don't know who he is, only that he is there every day, walking along the east side of the highway, next to the San Elijo Lagoon.

For the past four years, Norm has become known as the guy who picks up trash — every day.

“I tried jogging when I retired, but then orthopedic issues set in,” Tang says. “So when I started walking, I thought I might as well do something while I’m walking.”

Walking along his three-mile route from Las Olas restaurant, south to the lagoon’s Harbough Gateway Preserve, he normally fills a plastic bag full of small pieces of debris. But sometimes he’ll find large or unusual items.

Tang says he once found a camera, also an iPad. “I guess someone leaves them on top of their car and drives off?”

After finding a bike down the bank, in the lagoon, he hauled it up to the highway. “It was gone in half an hour,” Tang says. He’s also found surfboards and ladders, which he’ll also leave on the roadside for someone else to pick up.

Sometimes he finds money, mostly coins, but he did find a $50 bill once. “I think someone either got mad or pulled something else out of their pocket to throw away, and the money went with it,” he says.

Tang only walks along the east side of the highway because debris and trash on the beach side gets blown across the highway, he says.

What Tang doesn’t understand is how he can pick up every piece of trash, and on his return walk a half hour later, find new trash.

But Tang’s biggest pet peeve ("pun intended," says Tang) is when people take the time to pick up after their dog and then leave the plastic poop bag. “I find seven or eight them all the time,” he says.

Tang points out he’s not a hero or celebrity. “There are lots of others that do what I do along the beach.” But he does admit that occasionally people stop to thank him.

On July 27, after reaching the end of his route, he talked about the changes he’s seen in the lagoon, primarily the restoration of natural habitats and removal of nonnative plants. “I guess I should join the conservancy,” he said.

Footnote: The San Elijo Lagoon Conservancy is a nonprofit watchdog organization that started in 1970 to protect the lagoon from plans for developing a marina and a 700-home housing project. It has been credited with creating the public/private partnership that now protects the 979 acres of the San Elijo Lagoon Nature Preserve.