Gypsy’s one mother of a musical at Cygnet

Mama Rose could have been, as someone says, “a pioneer woman without a frontier.” 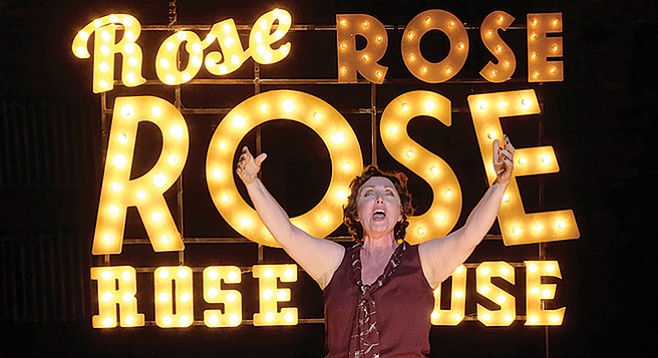 The great musical Gypsy begins with Baby June and Louise auditioning for Uncle Jocko the Clown. He obviously loathes tryouts and children. Louise is inaudible. Just when you’d expect him to scream, a vocal bomb explodes at the back of the Cygnet Theatre — “Sing out, Louise!” — that practically shakes the foundations.

Enter Mama Rose, suffocating stage mother and template for control freaks everywhere. She bullies down the aisle as if on a mission for her Maker. How, you wonder, when the storm passes and the clouds clear, could anyone be the least bit creative under her tutelage? She sucks the air from the theater. Even from a breathless Jocko.

In “real” life, Mama Rose would do anything to make her daughters, Louise and June, Vaudeville stars. She even rigged a talent contest in Seattle, where they were born. She had June on stage at two-and-a-half (“Tiniest Toe Dancer in the World”). And when Baby June eloped with Bobby Reed, Mama Rose loaded all her efforts into her other, “no-talent” daughter, Louise.

Be careful what you wish for: both daughters were big stars, in spite of their mother. Baby June became June Havoc and Louise, the famed stripper Gypsy Rose Lee. Mama Rose got her wish but not her way.

In her oversized, homemade coats and desperately upbeat, Mama Rose resembles these political times: she’s as fascinating as she is scary. Linda Libby’s masterful performance at Cygnet adds other, more human touches. Rose loves her daughters — in her own way. She’s funny, often self-aware of her Panzer-like urge to dominate. And she’s unsinkable — right up there with Molly Brown — to the point that it almost drives her mad. Libby’s portrait and belting voice layer Rose with positives and negatives. She could have been, as someone says, “a pioneer woman without a frontier.”

The person playing Louise/Gypsy Rose Lee has one of the most difficult arcs in musical theater. She must go from her mother’s mute, Ugly Duckling to dazzling vocal and physical assertion: from the basement to the penthouse. As Louise, Allison Spratt Pearce does an amazing thing: she makes the changes almost imperceptible. She begins as the fifth banana in a four banana cluster. Then she gradually awakens to her talent and herself. In the end, Pearce not only commands the stage — thanks to Jeanne Reith’s elegantly spangled costumes and Peter Herman’s spot-on wig — she even looks like Gypsy Rose Lee.

Gypsy is the largest show Cygnet has staged in its 13 seasons: a cast of 24, 6 musicians (ably directed by Terry O’Donnell), all kinds of set changes (even “roll drops” flying in) and lighting cues. On opening night, if artistic director Sean Murray hadn’t mentioned it in his pre-show remarks, you would never have known. The evening flowed; the scenes had depth and often subtle moods. Everyone contributed, especially Katie Whalley Banville as June and Manny Fernandes as passive-until-crunch-time Herbie.

Cygnet has done full justice to “the mother of all musicals.”

Playing through September 4; Wednesday and Thursday at 7:30 p.m. Friday and Saturday at 8 p.m. Sunday at 7 p.m. Matinee Sunday at 2 p.m. cygnettheatre.org