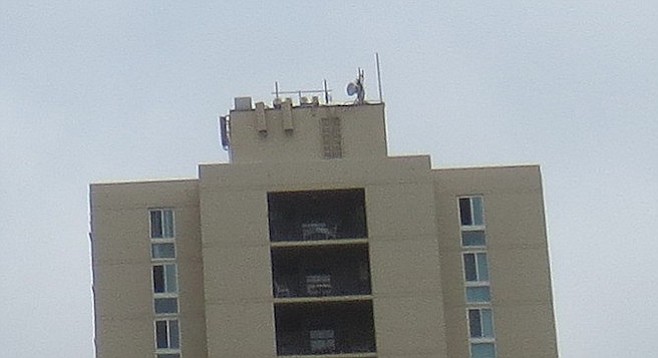 A little before 7:30 a.m. on July 23, a crane as well as eight commercial and flatbed trucks were parked in the middle of the street in front of Sorrento Tower, a 14-story low-income senior apartment building at 2875 Cowley Way. 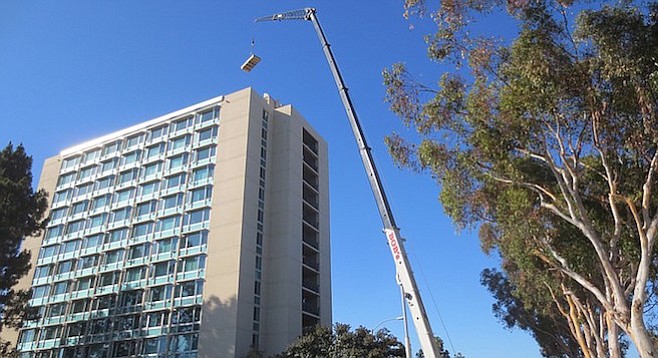 They sort of look like solar panels from a distance

I overheard a resident telling the traffic-control guy that the crane was lifting solar panels up to the roof. He then said to me, “They’re putting solar panels up on the building, to keep it cool. That’s where I live.” Nine other residents believed the same thing.

When I asked several workers about the solar panels, one of them replied, “No, we’re actually putting antennas up for Verizon so they can have better service around here.” After he confirmed that it was for a cell tower, he then said, “We’ve already had a couple of people ask us, 'Doesn’t that give you cancer?' I said, 'No, it doesn’t. You’re not getting cancer from your cell phone are you?'”

After my conversations with Sorrento Tower residents and workers, I asked the building's manager, Diane Shull, whether solar panels or antennas were being installed.

“I'm not sure how Verizon got involved in this conversation but they have nothing to do with the project,” she said. I again asked her to clarify if it was cell-tower-related or not and she said, “It’s cell-related but no solar panels are involved; it’s to cosmetically cover the cell tower [on Sorrento Tower's roof].”

I asked Shull if she had any idea why some of her tenants were so certain that solar panels were being lifted to the roof. She said, “We always notify them when work is being done.”

A document search turned up a city-issued permit in June for a construction change to a prior project permit issued to Near-Cal Corp in March 2015 for an AT&T cell tower. The scope of work for the latest permit includes a new antenna screen and a new electrical service panel; the prior permit was for installation of new equipment cabinets, panel and GPS antennas, and two new 200-amp electrical services for a cell site.

I also found other Sorrento Tower cell-tower applications and permits going as far back as 2003 from Sprint, T-mobile, Clearwire (before the Sprint merger), Modeo, Cricket, WesTower Communications, and American Tower Corporation.

Cell towers and other wireless infrastructure may accelerate in San Diego due to new California legislation (Assembly Bill 57). As of January 2016, wireless infrastructure is given automatic approval by the state if local municipalities don’t move fast enough. It also appears to give applicants a free pass on environmental concerns as only they can extend the deadline.

Within AB 57, it states, “The Legislature finds and declares that a wireless telecommunications facility has a significant economic impact in California and is not a municipal affair as that term is used in Section 5 of Article XI of the California Constitution, but is a matter of statewide concern.”

In other words, statewide interests trump local concerns when it comes to cell towers.

About the worker saying “Verizon antennas” instead of AT&T antennas, it’s not that odd when you consider that AT&T paid $2.35 billion for access to Verizon service areas in 2009.

As I watched the crane take its last load to an orange-vested worker atop the tower around 4:30 p.m., a resident asked me what they were doing. I told him they were lifting antennas for a cell tower. When I asked him if it helped make his service better, he laughed as he said, “No, no, no, it doesn’t. I mean, you know, we’re just the antenna for other people. It makes our service worse.”