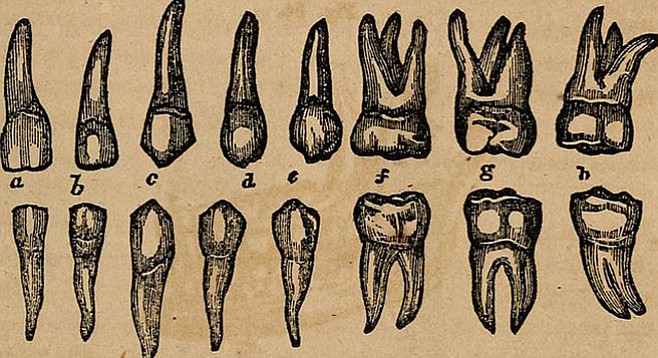 Dear Hipster:
Why do so many people have nightmares in which their teeth fall out? Is it just one of life’s little mysteries or is there a very good reason?
— Ella, Hillcrest

Though it features prominently in the first verse of Phantogram’s recent single, “You Don’t Get Me High Anymore,” the infamous “falling-out-teeth dream” is only the second-most common recurring nightmare among hipsters. In the most widespread hipster nightmare, you’re hanging out with a group of your friends at a local third-wave coffee shop, and you mention an obscure French indie synth-pop group that you just discovered on YouTube. You say, “You probably haven’t heard of them yet,” but your friends all turn to you, and one by one they repeat that they were into it last year, but they’re over it now. Then, they go on at length about a grindcore outfit from Boise that you’ve never heard of.

You finish your Guatemalan pour-over in silence.

There must be something universal about the “falling teeth” dream, since so many report having it. Nightmares about teeth make sense, since teeth are naturally terrifying. If you don’t believe me that teeth are inherently horrific, Google image search “hyperdontia.” But, really, don’t ever Google “hyperdontia,” no matter how curious you are. It’s a bad idea. Like asking a dermatologist, “What’s the grossest thing you’ve ever seen?”

I like this. I’ll now be answering #lifeslittlemysteries. And, yes, you can tweet your queries to @sdreader if you’d rather.

Dear Hipster:
Should I ironically drink a cold can of warmed-over cat pee, I mean, America this summer because it’s so silly?
— Chad, Hillcrest

Go for it. While you’re at it, stick a Confederate flag on the back of your truck and get to hatin’ the gays. It’s all good. You’re doing it ironically, right?

Irony, even seemingly harmless hipster irony, should serve a purpose, otherwise you’re just a pain. What will you prove by drinking beer you don’t like? I doubt it will be the burning indictment of working-class America’s dark side that you want it to be.

Instead, produce a YouTube video featuring folksy guitar music and a Good Ole Boy character who explains the America-ness of America beer: from its European ownership, down to the rice it’s brewed from, which I wouldn’t be surprised to discover growing in China.

Dear Hipster:
Is it okay that, as a grown man, I’m wandering around my neighborhood playing Pokémon GO?
— Matt

Would you ask me if it was okay that you watch Sportscenter every day? How about asking whether or not it’s okay to spend $20 on an Uber to take you and your adult friends to a new brewery where you can spend $8 on a glass of novelty beer?

Anyone who thinks there’s a substantive difference between playing little kids’ video games and myriad other, equally asinine (at least to some) ways in which we mature citizens of the modern world spend our leisure time reveals nothing but his biases. I could hardly condemn playing Pokémon GO players and praise those who spend inordinate amounts of time composing the perfect Instagrams in the same breath. That would just be, well, frankly, hipstercritical!

Just, please don’t play while you drive. There are hipsters on fixies everywhere, and we don’t wish to be squashed.