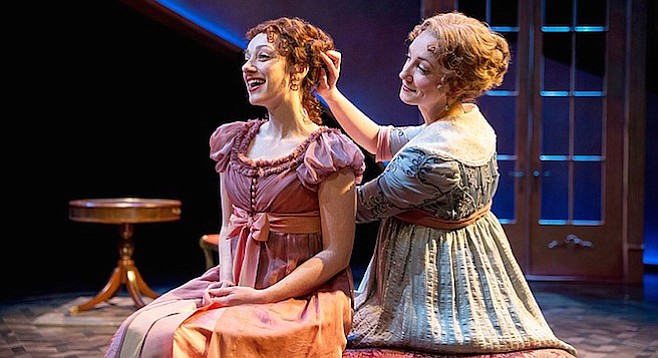 Ardent lovers of Jane Austen’s novels are in for a shock when they arrive for the Old Globe’s Sense and Sensibility. They won’t see the fog-shrouded southeastern coast of Sussex or the milder clime of Devon or the 260 miles, as the crow flies, in between.

Instead, a gigantic spiral-swoosh hovers over the stage like a falling ribbon. And the stage itself has three levels of blue circles, like stacks of mammoth poker chips, where stand small clusters of period (1792–1797) furniture.

Though off-putting at the start, the abstract design mostly works. Donald Holder’s expert lighting and flown-in drops convert the aerial sculpture into a staircase, a window, and a roaring sunset, among others. And the Globe’s co-production with Chicago Shakespeare Theater mostly works as well, though it edges toward toned-down sameness.

Nineteen-year-old Elinor Dashwood is all sense. She’s packed her feelings in coffers of restraint. Younger sister Marianne is all sensibility. Rational thought can’t invade her world.

Seen through the eyes of Austen’s largely upper-class readers, Marianne’s a fanatic (she has an ardent love of Lord Byron, for mercy’s sake!), while Elinor is pretty much the social norm. But Austen subtly critiques those who, like Elinor, cling to propriety and convenience at the expense of the heart.

The death of their father might put the Dashwood sisters in dire economic straits. Their brother John’s wife Fanny would love to snatch their inheritance and “release them from the burden of wealth and prosperity.” So they must wend their respective ways, in life and in love.

“How,” asks Marianne, “will we endure each other when we have no income?”

The Globe/Chicago Shakespeare co-production offers competent, but not spectacular, voices. As a result, many of the songs in Paul Gordon’s score sound similar in melody and approach: variations on a narrow theme. This may be deference to Austen’s brilliant intimacy (in her novels you are literally the fly on the wall, in a home you’d never enter otherwise). But the music runs together, especially in Act Two, where the composer has a number for almost every conceivable occasion.

If theater has a fourth wall, converting novels into plays should have one, too. The performances, especially Sharon Rietkerk (Elinor) and Megan McGinnis (Marianne) are competent. Some, however, break Austen’s stylistic wall and make broad choices for easy laughs: Paula Scrofano’s Mrs. Jennings, for one, and Jill Van Velzer’s Fanny Dashwood — a Wicked Witch of the Shire — for another (and when she chases a character off the stage with a pair of scissors, fans of Jane Austen might want to reach for a pair of their own).

The often entertaining production uses these timeworn comedic bits as shorthand to label the characters. But they’re too cartoony for the style and verbal subtleties of the novel. The actors perform as if aware of an audience in the house. Austen’s people would be appalled to know someone’s watching. Not to mention outsiders making it past their gates.