A look back at major league sports in San Diego 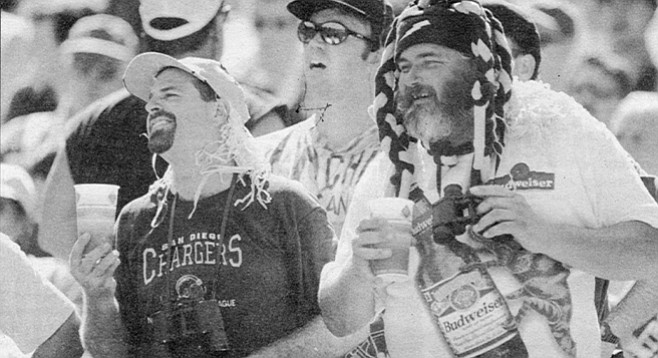 Why I Hate Football

Working bars in New York, I had to keep the nightstick ready during Giants' games. I pried sports fans apart, called cops and ambulances. In Coronado years later, tending bar, a drunken married woman about 50 became despondent over a Chargers loss. She clutched me in the office after closing time, tears streaming from her eyes, and begged me, "Make love to me now. Help me to forget." 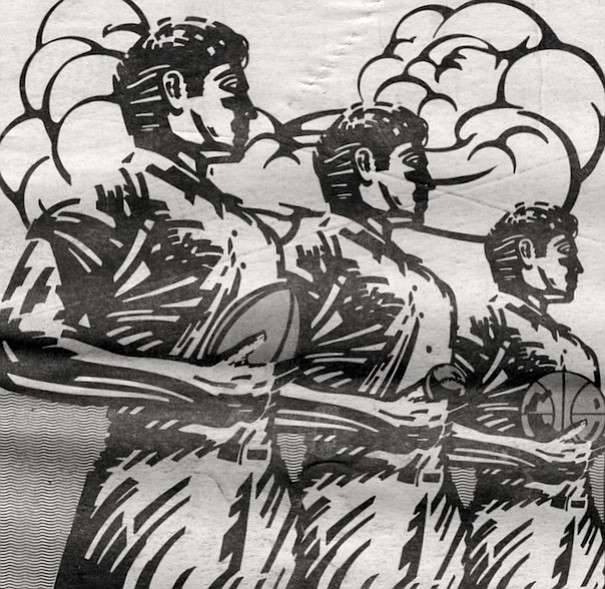 They Shall Have Sports

Leon Parma was leaving nothing to chance. When he took the concierge aside and paid her to deliver San Diego’s Super Bowl brochures to the owner’s rooms, Parma was thinking of their wives. “I figured that if the book was sitting around in their rooms, momma would definitely flip through it, and it was put together so well that just flipping through it got its points across. And she might get the owner to look at it.” 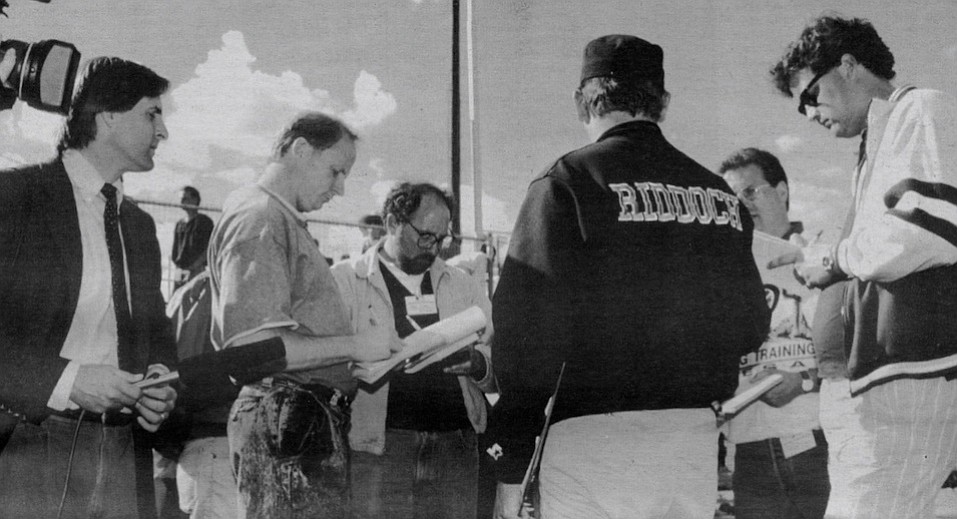 Former Padres manager Greg Riddoch talks with the press, spring training, 1992: “A lot of players are jerks. It didn’t used to be that way. Money changed them."

I Was the Coolest Guy I Knew

Nick Canepa’s “Sez Me” column is the best thing in the paper. He should write it more than once a week. The section needs more columnists. Mark Ziegler is sharp and insightful. Make him one.

Expand pro football coverage during the season. Tom Krasovic is the best beat writer on the staff; he should cover the Chargers. Jerry Magee should write more about football and less about anything else. And so should Jim Trotter. 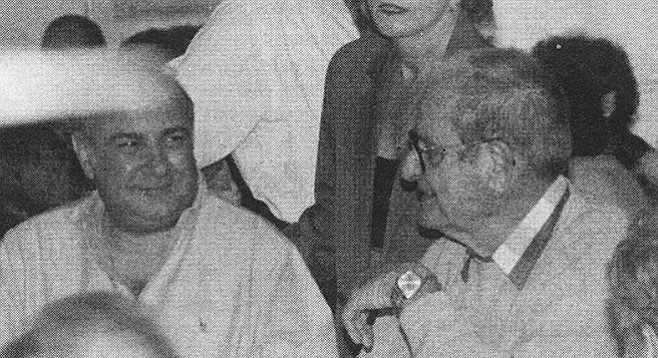 How Alex Spanos Made Off with the Police Building Fund

“Yeah, that’s right, they’re going to steal the money for Alex’s Chargers training field from the cops’ pueblo land fund. A big chunk of their pueblo land money is earmarked for Alex,” another inside source told us when we called to confirm what sounded like the wildest Spanos tale yet. “McGrory thinks he can get away from it because nobody is looking, and the Union-Tribune isn’t going to tell anybody about it. 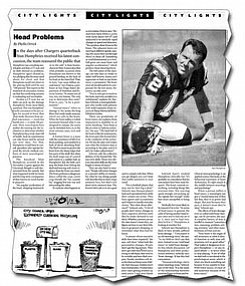 What Happened to Stan Humphries Brain?

Neither a CT-scan nor an MRI can pick up the damage Humphries' brain most likely sustained. This was Humphries' fourth concussion in his pro career, his second in fewer than three weeks. Recovery from second concussions — much less fourth ones — is rarely 100 percent. Most neurologists have neither the training nor the inclination to determine whether Humphries has a truly clean bill of health. Such an examination can take hours and be spread out over days. 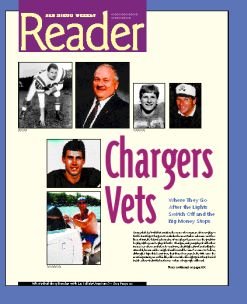 Kemp: “The first year I went around and talked about the new league and the Chargers as a PR agent for the league. I must have given 150 speeches about this new league. My wife and I had one child and one on the way when we moved to San Diego. It was a blessing, because we got to move to Point Loma. It was one of the great sports franchise moves in modern history.”